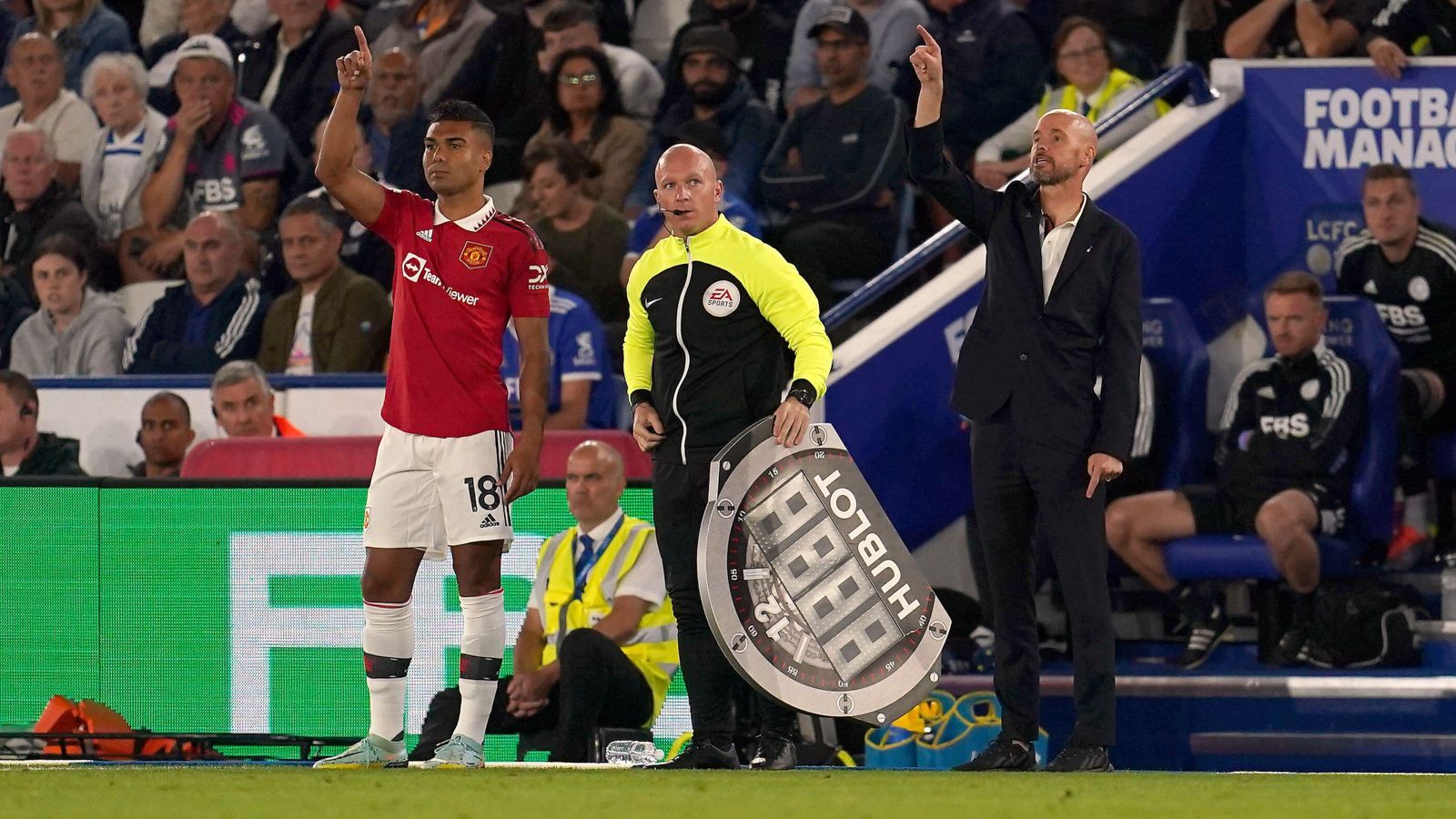 Man Utd boss Erik ten Hag ‘pushed for a deal’ to sign Casemiro with the Brazilian set to start against Everton on Sunday, according to reports.

The Brazil international moved to Old Trafford in the summer transfer window for £70m from Real Madrid with eyebrows raised at the high price for a 30-year-old.

And Ten Hag hasn’t started Casemiro in the Premier League yet this season with the five-time Champions League winner’s only start in any competition coming in a 1-0 Europa League defeat to Real Sociedad.

Man Utd bounced back from back-to-back defeats in their opening two matches of the season to win four Premier League games in a row before a 6-3 humbling by arch-rivals Man City on Sunday.

There have been calls to play Casemiro more and the Daily Telegraph now claim that is set to be in Ten Hag’s starting XI for their clash against Everton at the weekend.

Barcelona midfielder Frenkie de Jong and then Juventus midfielder Adrien Rabiot were targets for Man Utd in the summer but the Daily Telegraph understands that Ten Hag was content to see a deal for Rabiot collapse as Casemiro was his ‘preferred’ choice.

‘After Sunday’s debacle Casemiro is now likely to be given his chance. Contrary to suggestions the Brazil international was wanted by Ten Hag once he was made aware he was willing to leave Real Madrid.

‘Ten Hag preferred a move for Casemiro, and pushed for a deal, over United’s attempts to sign Adrien Rabiot from Juventus with that deal collapsing.’

Man Utd legend Rio Ferdinand reckons Casemiro could feel “disrespected” at being left out of the starting XI after all he has achieved in his career.

“Casemiro’s another one, he’s sitting there going, ‘I’ve won five Champions Leagues with this team’,” Ferdinand told his Vibe with FIVE YouTube channel.

“I’ve heard people today say, ‘if he plays he needs legs around him, he can’t play with Eriksen and Bruno’. This geezer played with two snails in Modric and Toni Kroos – he just knows his way around a football pitch.

“He is a fantastic defensive midfielder, one of, if not the best, in the world before he came to Man United.”

“He ain’t been given a start in the team when he’s fit and ready, he’s regressed in terms of fitness, so he’s now worse off than when he came. He still had to get up to speed when he came from that league to this league.

“I wonder the impact it’s having on someone like him. Yes he’s experience and whatnot, but he must be sitting there thinking, ‘wow, I’m happy to be here at Man United but I’m feeling a little bit disrespected here, given what I’ve done’. I’d be surprised if he’s not feeling like that.

“I think we will [see Ronaldo and Casemiro play], but I think it’s the context of what games they’re playing in – they could be playing midweek Europa game. That won’t sit well with them.

“These are the sub-plots to what Ten Hag has to deal with. This is what management is about, he’s got to manage that type of player, that type of ego, the pride that comes with these types of players. If you’re not playing, you’ll see a difference in the way they look at you now, and that’s what you’ve got to manage.

“He didn’t have those problems at Ajax with the players he had, he was very much in control, the master of the universe there. Here you’ve got big egos to deal with and this is the task when you come to a top club.”