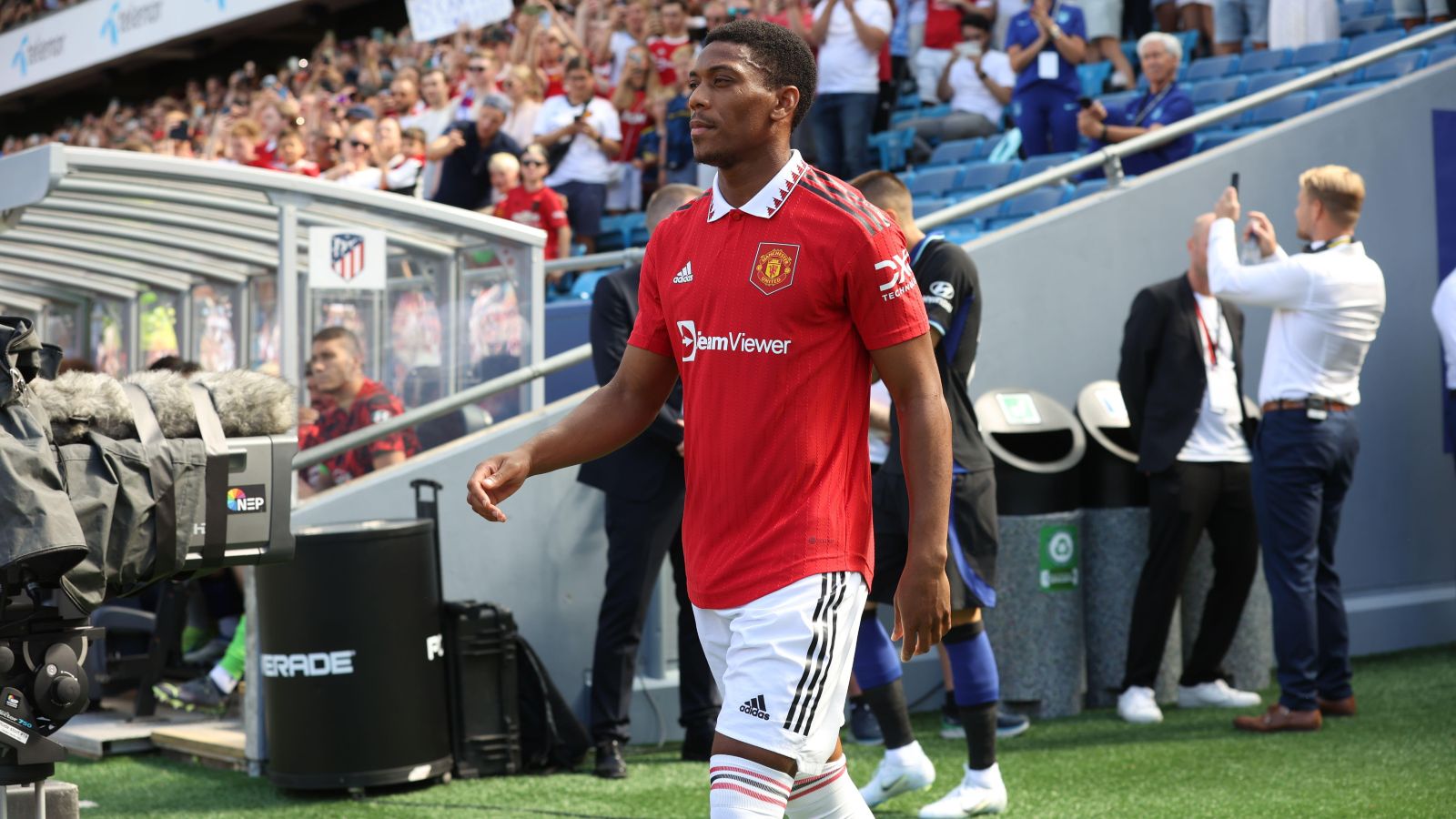 Anthony Martial will again be missing for Man Utd this weekend and Erik ten Hag is weighing up how best to use big-money signing Antony against Arsenal.

After kicking off his reign with galling losses to Brighton and Brentford, the Dutch manager followed the key victory against rivals Liverpool with a pair of a dogged 1-0 wins on the road.

Martial missed the opening two games of the season with a hamstring complaint and returned as a half-time substitute against Jurgen Klopp’s Reds, providing the assist for Marcus Rashford’s decisive goal.

But an Achilles complaint ruled the France international out of the away triumphs at Southampton and Leicester, with the Man Utd forward lied low again when table-topping Arsenal come to Old Trafford on Saturday.

“Anthony Martial will not be involved for Sunday,” Ten Hag said. “I cannot tell in this moment (when he will be available again).”

Luke Shaw and Aaron Wan-Bissaka’s availability is less clear after the Man Utd full-back’s both missed Thursday’s 1-0 win at the King Power Stadium with “small complaints”.

Asked about their availability for Sunday, Ten Hag said: “It’s difficult to say when I talk about Luke Shaw and Aaron.”

The Man Utd manager tends to keep his cards close to his chest but has shown with Casemiro that he will not necessarily throw new signings straight into his line-up.

The 30-year-old has started from the bench in both matches since joining from Real Madrid for an initial £60million and compatriot Antony could be in the same boat.

The Brazil forward reunites with his former Ajax boss in the north west having completed his signing for £80.6million plus add-ons ahead of Thursday’s transfer deadline.

“(Thursday) he did his first training, individual,” Ten Hag said.

Ten Hag will also think about whether to give Casemiro his first start on Sunday as a frantic fixture schedule begins to pick up pace.

“It is an option but I also have to (think it over),” the United manager said. “I have seen Arsenal, a tough opponent.

“They’ve started really well, as we all know. In the season you can see there’s a team who are longer together, with a coach who is bringing his philosophy in the team, so for us it’s a good test.

“I’m really looking forward (to it) and we will pick the right XI to start.

“Also today the subs who came on did really well, so I’m happy with that and that is what we have to construct further.”

Cristiano Ronaldo and Fred joined Casemiro in coming off the bench to see out a win that had meticulous Ten Hag’s fingerprints on it – a far cry from last month’s shambolic 4-0 loss at Brentford.

“I have seen some good stuff,” he said at the King Power Stadium. “It’s more than details but I see structures are coming.

“We are constructing and that’s good to see. But we have to do that and improve from game to game.

“It’s about formation, about getting and creating lines and then making the right decisions.

“But also the decisions on the ball and out of possession, we are making good steps, we have a base but there’s still a lot of room for improvement.”

An area that has improved markedly is defensive solidity, with Ten Hag’s decision to partner Raphael Varane and Lisandro Martinez at centre-back bringing three wins and two clean sheets.

“Collectively, I see the whole team is defending and that makes it more easy for our defenders,” the United manager added.

“But I think what they do well is co-operate and they do it together, they support each other and then they have a good performance.

“It’s difficult for opponents to create chances and I think this is what we’re seeing on the pitch.”