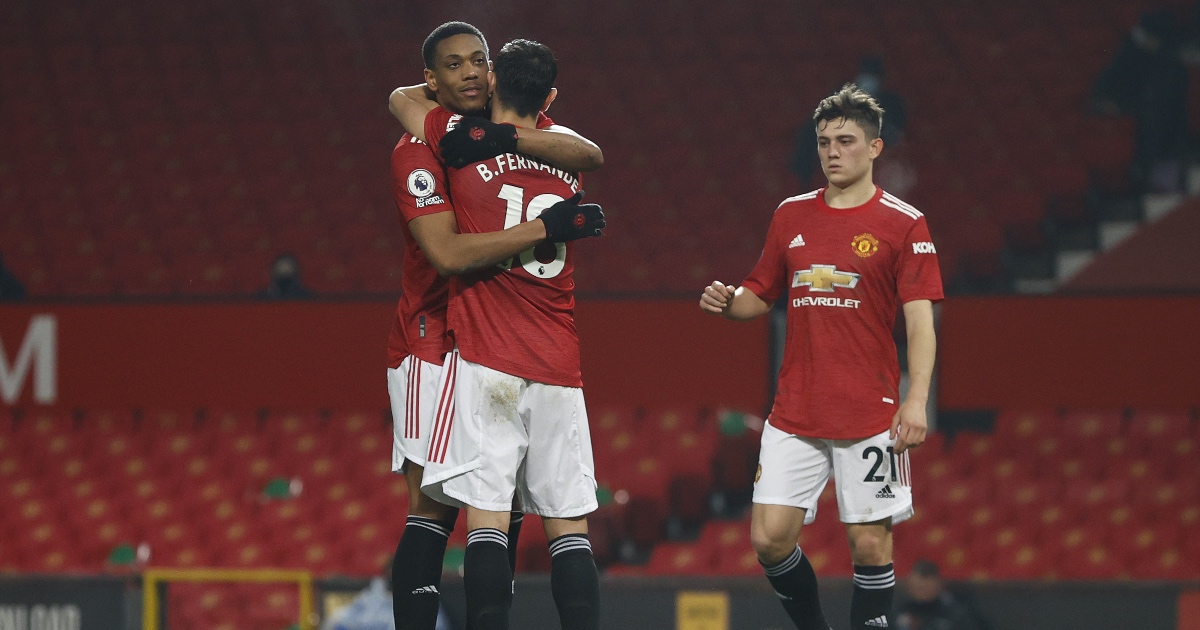 Man Utd equalled their Premier League record win as Southampton found themselves on the wrong end of a 9-0 scoreline once again.

Alexandre Jankewitz’s red card within 90 seconds of his first senior start for a terrible challenge on Scott McTominay made an uphill battle even tougher for the injury-hit Saints.

It was a gut punch that meant it was a case of how many Southampton would concede on the way to their fourth consecutive league loss, with Jan Bednarek also sent off as Man Utd went on to win.

It was an unwanted repeat of the scoreline that Ralph Hasenhuttl’s men fell to against Leicester in October 2019 as United equalled their record Premier League win against Ipswich from 1995.

The victory moved United level on points with leaders Man City and dramatically cut the goal difference gap, with full debut Jankewitz’s red card from Mike Dean after 81 seconds making this a night to forget for the Saints.

Aaron Wan-Bissaka and Marcus Rashford scored before Bednarek’s own goal, with Edinson Cavani heading home before the break.

Dean was advised to check the pitchside monitor after Martial went down under very little pressure from Bednarek, yet kept with his decision and surprisingly sent off the Poland defender.

Bruno Fernandes scored the penalty, before Martial and fellow substitute Daniel James made it nine.

This night will haunt Southampton for a long while to come.

Jankewitz’s high challenge on McTominay ended the visitors’ night before it had even started at an empty Old Trafford.

United pegged the visitors back from that point and inevitably opened the scoring in the 18th minute as former Saints left-back Luke Shaw whipped in a fine cross for Wan-Bissaka to score a rare goal.

Shaw was again involved and prodded forwards to Mason Greenwood, whose cutback was met by a first-time Rashford finish that had too much on it for Alex McCarthy to claw out.

A fizzing free-kick from set-piece specialist James Ward-Prowse forced David De Gea into action for the first time on a rare voyage forwards by the visitors, who were soon on the backfoot once more.

The United onslaught continued and Bednarek inadvertently found the back of his own net in the 34th minute when trying to cut out a Rashford cross.

Solskjaer’s men showed no mercy and Shaw crossed for Cavani – the match-winner when these sides met in November – to head home the fourth in the 39th minute.

Things could have gotten worse before half-time had the VAR not intervened.

Dean pointed to the spot after Kayne Ramsay, making his first Premier League start since December 2018, fouled Cavani, but Graham Scott ruled the foul occurred outside the box.

Donny Van De Beek and Martial were introduced at half-time for Shaw and Cavani as United went for the throat, only for Che Adams to fire home from an acute angle following a Ward-Prowse free-kick.

De Gea screamed at his team-mates in Spanish, only for his clean sheet to be restored by the narrowest of offside calls by the VAR.

The Saints had done well to stem the flow but Fernandes opened them up in the 69th minute and substitute Martial did well before rifling into the roof of the net.

McTominay quickly made it six from distance and, having gone close to his second, Martial won a penalty after being brought down by Bednarek.

The VAR instructed Dean to watch a replay on the pitchside monitor, with the referee keeping with his decision and sending off a bemused Bednarek.

Fernandes scored from the spot and United poured forwards in search of more.

Martial grabbed his second of the night before James wrapped things up in stoppage time.