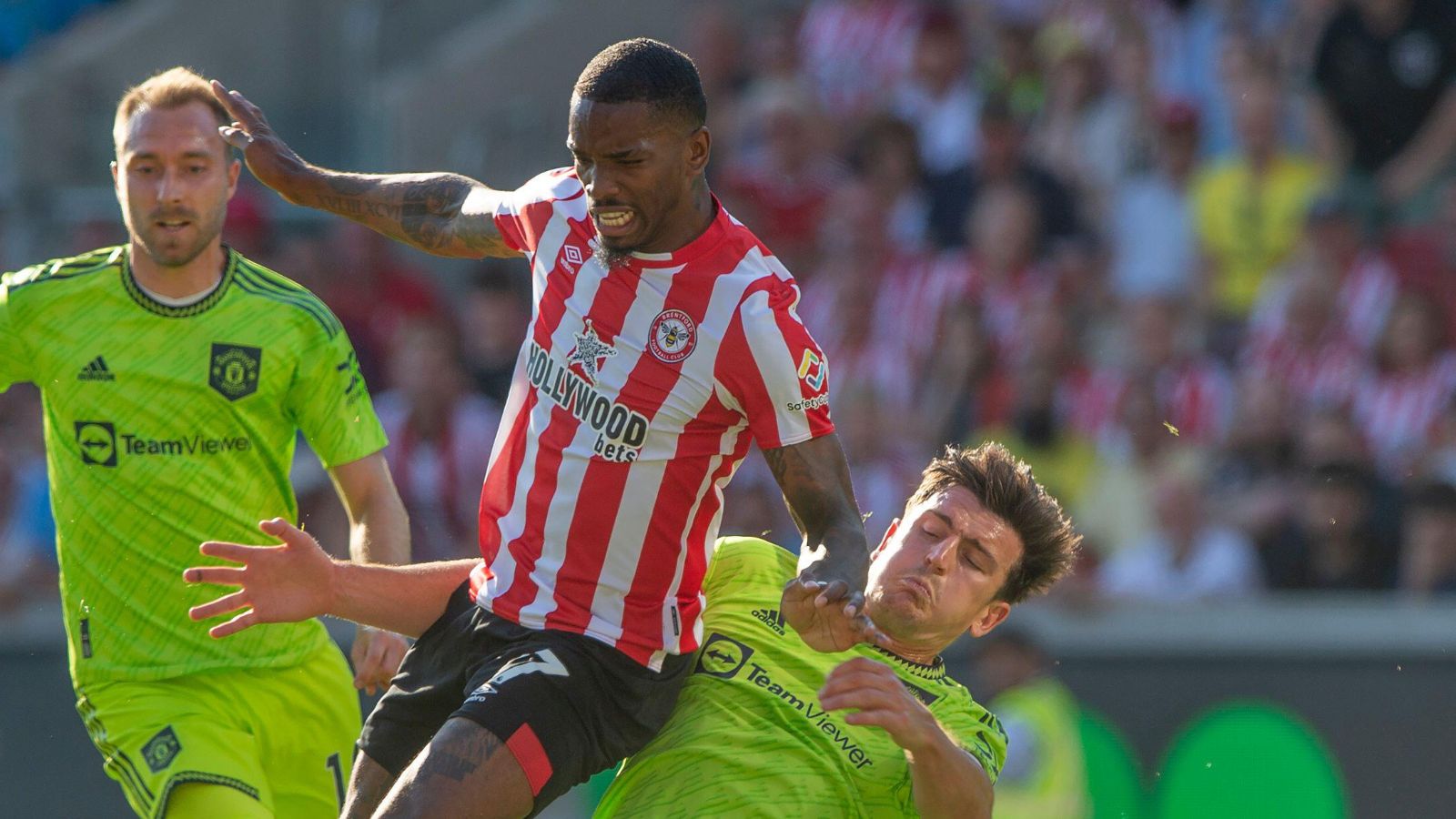 Newcastle United’s back-up goalkeeper between the sticks, Harry Maguire as captain (obviously) and the Premier League’s second-best striker up top for this England.

Disclaimer: To be eligible, players must have started their careers at a Football League club and made at least 100 EFL league appearances before moving up to the Premier League.

With the admin out of the way, here’s a #MadeInTheFootballLeague England XI that may not be as good as Gareth Southgate’s preferred XI, but it is at least more creative…

Goalkeeper: Karl Darlow
We are scraping the barrel already a bit here, though that’s hidden by the shock of discovering that hot young prospect Darlow – made at Nottingham Forest, of course – is now 31.

The Newcastle United back-up was tipped for England as recently as the start of 2021. But he has dropped down the pecking order at St James’ Park, playing only nine times since the start of the 2021/22 campaign.

A colossal injury crisis will be needed for Darlow to get a sniff for the actual Three Lions.

Right-back: Djed Spence
Now we have Tottenham Hotspur’s new £20m man, who was one of the Championship’s best defenders in 2021/22 while on loan at Nottingham Forest.

Playing under Antonio Conte was always going to be a whole other level of challenge for the 22-year-old. And that has proved to be the case as Spence has only played a solitary minute in the Premier League.

Spence is still playing a supporting role to Emerson Royal, who was rubbish last season (Barcelona ‘could not believe’ Tottenham paid £25.8m for him). Yet Conte has waved his magic wand to make turn Royal into a competent footballer; the angry Italian is really good at his job.

Centre-back: Harry Maguire
Here we have the first regular for the proper England team, and who better to kick us off than everyone’s favourite defender (hewn from steel in Sheffield)?

The Man Utd captain is going through a troublesome patch as he is currently keeping the substitutes’ bench warm at Old Trafford.

On the sly, he might be hoping Raphael Varane gets injured again because otherwise, he is not going to play much between now and the World Cup. Gareth Southgate has his favourites and Maguire is certainly among them.

But even Southgate has already stated that the defender’s situation at United “is not ideal” before England’s inevitable quarter-final exit in Qatar.

Centre-back: James Tarkowski
Two-cap England international Tarkowski was a solid addition for Everton in the summer and on a free transfer, signing him was a no-brainer.

Frank Lampard had to build a better back four after last season’s shambles, and Tarkowski – who has done the hard yards at Oldham and Brentford – and Conor Coady have been quick to shore up their defence.

You have to go as far back as 2018 for the ex-Burnley man’s last appearance for England. That’s pretty unfair considering how consistent he was for the Clarets.

He will not be far off getting a call-up in the winter if his positive early-season form continues in the next few months.

Left-back: Rico Henry
Here’s a fun one. England have a few left-backs to choose from yet Southgate often goes for the versatile and experienced – but undeniably right-back – Kieran Trippier to play there.

But with Luke Shaw and Ben Chilwell not playing at Man Utd or Chelsea, Henry may eventually receive the same attention as his teammate Ivan Toney.

The ex-England U20 international has been one of Brentford’s breakout stars in the Premier League following their top-flight arrival and as a natural modern-day wing-back, he ticks a lot of boxes.

Centre-midfield: Lewis O’Brien
Given how the law of averages work, the only Nottingham Forest player on this list was bound to be one of their 23 summer signings.

Ex-Leeds United target and Huddersfield Town stalwart O’Brien has made a decent start to life as a Premier League player, while the same cannot be said for Steve Cooper’s out-of-form team.

The 23-year-old got on the scoresheet in the damaging 3-2 loss to Fulham on Friday, which sounded an awful lot better than the dross of Aston Villa v Southampton that most of us watched.

While it looks likely that Forest will go straight back down, O’Brien is one player who will probably continue in the Premier League and an England call – even if it is just for one cap – will come eventually.

Centre-midfield: Kalvin Phillips
His £45m move to Manchester City from Leeds United has not gone well so far, has it?

You would be forgiven for forgetting this transfer even happened as Phillips has only played a total of 14 minutes so far this season.

Injuries have got in the way of him having a bright start at the Etihad, which is a great shame after he shone as a Leeds United player in the Premier League, particularly under Marcelo Bielsa.

Phillips was integral for Southgate alongside Declan Rice at the 2021 Euros, but he may already be out of the World Cup through injury.

Right-wing: Jarrod Bowen
Ex-Hull City winger Bowen broke through to play for England earlier this year after he was legitimately one of the Premier League’s standout performers in 2021/22.

The 25-year-old impressed in the 1-0 loss to Hungary before he was dragged off at half-time in *that* 4-0 defeat that followed just over a week later.

18th-placed West Ham have been sh*t in the early weeks of this season and Bowen is among the players struggling for form. Let’s face it, he was lucky to stay in the squad.

Central attacking midfield: Eberechi Eze
Oh yes, I am all for this. The ex-England U21 international missed most of last season through injury but he is now returning to his best under Patrick Vieira.

Eze is brilliant to watch when he is at full tilt. Having him (made at QPR), Michael Olise and Wilfried Zaha in one team is a thrilling prospect.

Vieira has low-key put together one of the most exciting forward lines in the league and my personal favourite Eze is a vital part of that.

If he avoids injuries, it will surely only be a better of time before clubs come sniffing around Eze, and an England call should also be on its way.

Left-wing: Solly March
It felt only fair that at least one Brighton player made the cut amid their sensational start to the 2022/23 campaign.

The Seagulls are everyone’s second-favourite club (unless you are a Crystal Palace fan) and March has been a stalwart of their team over the past couple of seasons.

The 28-year-old has already secured club legend status after managing to remain in the fold following their arrival in the Premier League in 2017.

March has gone under the radar compared to Lisandro Trossard and Pascal Gross, but he has performed pretty damned well.

Striker: Ivan Toney
Here is the main man, the Premier League’s second-best (Erling Haaland is not human) striker at the moment.

Well, maybe not, but Toney does have the best goals per 90 minutes rate out of him, Harry Kane and Aleksandar Mitrovic. That is the only stat that matters; for the purposes of this argument anyway.

But a la Lampard, after a wee laugh, let’s get serious. Toney is doing his damnedest to force himself onto that plane.

The Brentford striker took no time to adapt to life in the Premier League last season (he has now scored goals in all four divisions) and he has kicked off this campaign with a bang, scoring five goals in seven games.

No one is going to have a chance of playing ahead of Harry Kane but Toney – at least on form – is sitting comfortably as Southgate’s second-choice.