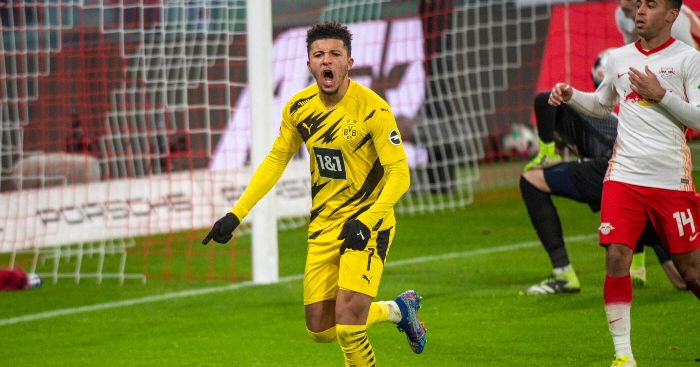 German football journalist Raphael Honigstein claims Borussia Dortmund are expecting Man Utd to start negotiating over Jadon Sancho “towards spring” but that it’s “inherently possible” they could announce a deal at the end of January.

The German club rebuffed the Red Devils’ attempts to land Sancho in the summer, holding out for €120m (£107m) which Man Utd were unwilling to match.

And now Honigstein reckons the most likely scenario is that Man Utd start discussing a deal with Dortmund “towards spring” and in time to complete a deal over the summer.

“He’s beginning to click again,” Honigstein told Sky Sports. “He looks really sharp, he looks up for it.

“By all accounts, he’s had a really good, small, winter break. A few days off where he’s come back full of energy. And you can see it on the pitch. And I think the debates or the names being mentioned will increase again, because his form is picking up again.

“But everybody in Dortmund knows nothing will happen in January, the player is not agitating for a move, there’s a very clear agreement that transfers of that magnitude at Dortmund will only happen in the summer.

“There was a big transfer announced in January a couple of years ago. That was Christian Pulisic [to Chelsea]. But remember, even his deal was the deal for the summer.

“So no one’s stopping United, if they went out, and felt really confident, to say, ‘let’s do this deal now, let’s make sure we get in now’. And maybe then announce it at the end of January. That’s inherently possible.

“We just haven’t seen or heard anything to suggest that they are indeed ready and willing to come back to that negotiation at the moment. I think everyone at Dortmund is under no illusions that the player wants to leave.

“But they think that the offers and the real negotiations will start closer to towards spring when clubs are perhaps in a better position to understand how much money they’ll have available for their transfer window in the summer.”

Honigstein added: “United are saying ‘you’re quoting us prices that are pre-corona prices, but come on, that’s not realistic’.

“And I think there will come a point where the player will also feel that his value needs to be realistic in order for him to be able to move.

“So Dortmund cannot now come back and say, ‘you know what, actually, he’s had another great season, he’s one year older, let’s make it €160m’.

“If it’s not Kylian Mbappe, maybe they’re going to go after Jadon Sancho.

“So all these things make Dortmund fairly confident they can still achieve a higher valuation. But of course, it’s also mixed up with him performing really well. So I don’t think it’s inconceivable that the price might go down a little bit, but not that much.

“And I think what’s happened with Leroy Sane moving to Bayern Munich last summer for €60m, including add-ons, when he only had one year left on his contract, has kind of framed the price and documents mind because they’re thinking, ‘if Bayern spend €60m on a player only has one year left, we have a player that has two years left and in the summer it was still three, why should we give them away for cheap?’