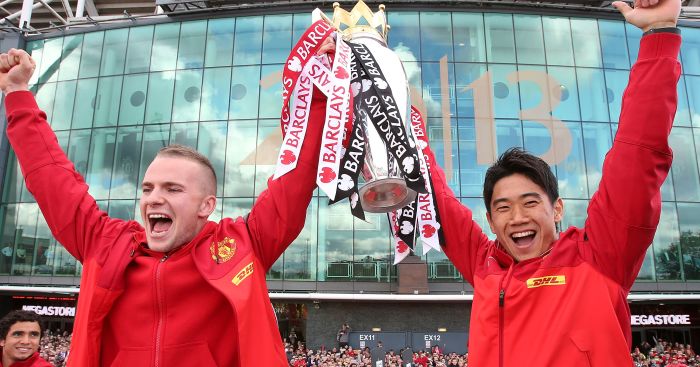 The 31-year-old came through the Red Devils’ fabled youth system and went onto make 79 first-team appearances, winning the Premier League as Sir Alex Ferguson brought a triumphant end to his reign in 2013.

There has not been a sustained title charge since then, although United are in the hunt this season and will usurp Liverpool at the top of the standings if they get a positive result at Burnley on Tuesday.

But first comes Saturday evening’s FA Cup third-round tie against Championship outfit Watford, whose midfielder Cleverley is happy to see his old club back on an upward trajectory.

Asked about the prospect of seeing some familiar faces this weekend, the former England international said: “Probably more on the staff than the players but it’s a great stadium to play at.

“Obviously I spent three, three-and-a-half years in the first-team but a lot of time in the academy and things like that, so, yeah, it’s great to see how well they’re doing in the league again.

“I think it’s good for English football that Manchester United are title contenders, so I’m looking forward to it.

“Obviously there’s not been a title challenge for seven, eight years now. It’s still early days, we’re not even halfway through.

“But, yeah, the way they’re playing and the players they’ve got and the attacking flair they’ve got, then the signs are looking good, even though they probably want to play it down right now.”

Cleverley’s time in the United first-team was bumpy at times after coming through the ranks at the club.

Loan spells at Leicester, Watford and Wigan came along with game time in the reserves during an impressive breakthrough, when his second-string manager for a short period was current first-team boss Solskjaer.

“He was my reserve team manager for six months to a year so, yeah, crossed paths with Ole,” Cleverley said.

“Obviously I played with Fletch [newly-appointed first-team coach Darren Fletcher] and Michael Carrick so there’s more familiar faces on the staff than the playing staff.

“It was very natural to him (Solskjaer) and at the time I thought he was great for the young strikers, like the moves and he was a natural finisher.

“I’m really pleased for him that he’s gone onto be a success at Man United.”

But while Cleverley’s affection for his former club is clear, Saturday is about making the most out a free hit in Watford head coach Xisco Munoz’s third match in charge.

“We’ve got nothing to lose,” he said of Saturday’s FA Cup third-round encounter.

“It’ll be a good stadium, good pitch, maybe a chance to see our new signing.

“So, yeah, it’s a positive game for us. We can go up there and try and show everyone what we’ve got.”