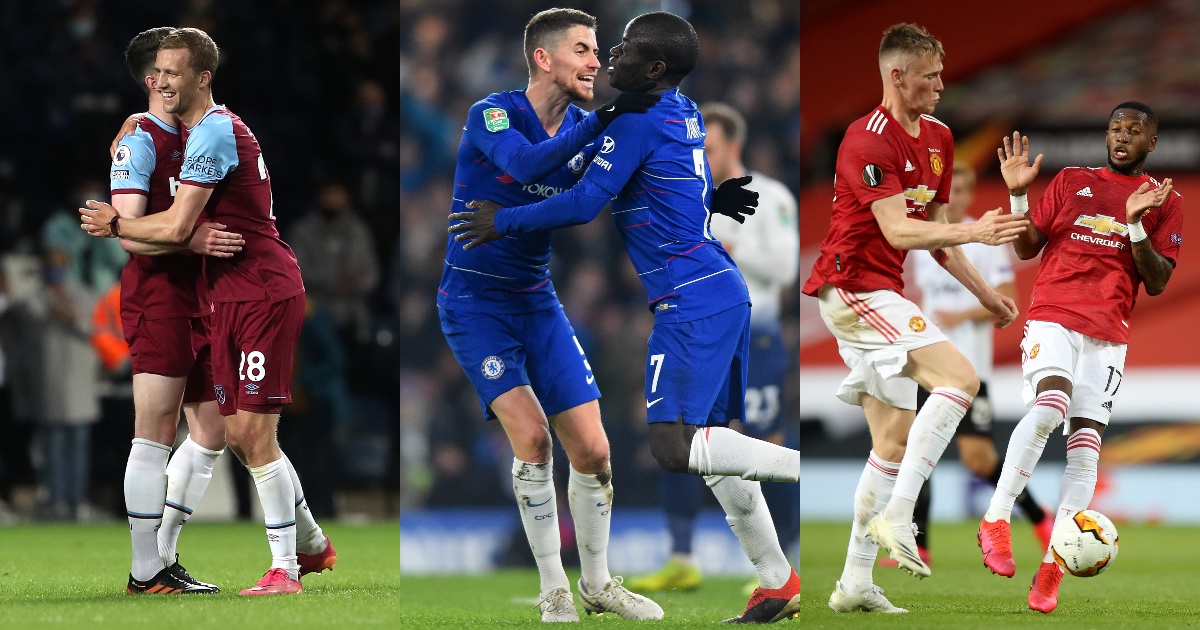 Most Premier League sides now play with two holding midfielders, sometimes known as the double pivot or double sixes, depending how wanky you are. Some play with a three, in which case we’ve used statistics to select a duo for this ranking…

20) Peter Etebo and Tom Cleverley (Watford)
Stoke midfielder Etebo, on loan at Watford for the season, is going to have his work cut out. Captain Cleverley had a rotten time of it alongside him against Brighton and Yves Bissouma, who robbed him of possession to assist Neal Maupay. Watford are going to have to score a hell of a lot of goals to stay up.

19) Billy Gilmour and Lukas Rupp (Norwich)
Very unfair to judge them having played against Liverpool and Manchester City thus far, but hey ho. Gilmour has shown for Chelsea and Scotland what he is capable of and against more amenable opposition; he may well shine for the Canaries.

18) Isaac Hayden and Joe Willock (Newcastle)
Steve Bruce was probably hoping the former £50million Manchester United target would have proved that he was worth even a quarter of that ludicrous valuation by now, but it wasn’t to be, so Isaac Hayden it is. Joe Willock at least gives them a much-needed goal threat.

17) Christian Norgaard and Vitaly Janelt (Brentford)
Two games, four points and no goals conceded. A knee jerk reaction for sure, but the Brentford pair have looked solid in front of their defence and are capable of affecting the game on the front foot.

16) Cheikhou Kouyate and James McArthur (Crystal Palace)
Kouyate performed admirably out of position at centre-back last season, but has now reclaimed his central midfield role alongside McArthur following the signings of Marc Guehi and Joachim Andersen. Conor Gallagher looks to be an excellent addition slightly advanced of this pair, who are your archetypal ‘do a job’ duo.

15) Ashley Westwood and Jack Cork (Burnley)
Having the longest running midfield pairing is very Burnley, just as Cork and Westwood are very Burnley.

13) Fred and Scott McTominay (Manchester United)
Here they are – the reasons Manchester United won’t win the title. Whether it’s because they don’t have the money or Ole Gunnar Solskjaer genuinely thinks they’re good enough, United will come a cropper without a midfield signing before the window closes. They’re miles off their title rivals in this area.

12) Thomas Partey and Granit Xhaka (Arsenal)
Albert Sambi Lokonga may well have played his way into Arsenal’s best pair, despite somehow being named in the worst XI of the weekend after his display against Chelsea. He was one of very few Gunners players not entirely outclassed by their opposite number. But had Partey been fit to start the season, he would likely have partnered Xhaka. The £40million man needs to stay fit – we’ve seen very little to suggest he is worth anywhere near that much thus far.

11) Oliver Skipp and Pierre-Emile Hojbjerg (Tottenham)
It was no surprise Hojbjerg ran out of steam towards the end of last season – he had far too many fires to put out. He had more pressure successes (232) and successful tackles against dribbles (61) than any other Premier League player. But also no-one missed more of those tackles (78) or had more pressures ending in his team not gaining possession (575). Early signs suggest Skipp will lighten the load.

10) Kalvin Phillips and Stuart Dallas (Leeds)
Phillips doesn’t really have a midfield partner and does an awful lot of the defensive work on his own. He’s the insurance while every other member of the Leeds midfield goes bonkers – some cutting edge analysis for you there.

9) Yves Bissouma and Adam Lallana (Brighton)
Bissouma essentially means Graham Potter only needs one defensive midfielder – he’s that good. The Brighton boss will be counting the days until the end of the transfer window as his star player could grace any team in world football.

8) Abdoulaye Doucoure and Allan (Everton)
Rafael Benitez will cherish defensive prowess over something a bit more expansive from that central area. He will be mightily pleased with Allan’s 21 pressure successes – the most of any Premier League player – after the opening two games of the season. Doucoure is more than capable of driving forward and creating if the tethers are sufficiently loosened.

7) Douglas Luiz and John McGinn (Aston Villa)
Luiz was involved as Brazil got to the final of the Copa America this summer, before starting all but one game in the Olympics to win the gold medal. McGinn helped Scotland to a triumphant 0-0 draw with England at Euro 2020. Luiz is calm in possession and aggressive out of it; McGinn is aggressive the entire time.

6) Ruben Neves and Joao Moutinho (Wolves)
Perhaps the most cultured Premier League pairing. Both better with the ball at their feet than they are at chasing after it. Neves leads the way in key passes (7) and shot-creating actions (11) among midfielders after the opening two fixtures.

5) Youri Tielemans and Wilfred Ndidi (Leicester)
They were entirely overrun by West Ham on Monday but they have lovely balance as a pair. Ndidi topped the Premier League charts for tackles and interceptions per 90 minutes last season (7.02) and Tielemans was the foremost midfielder in shot-creating actions (109).

4) Tomas Soucek and Declan Rice (West Ham)
“Apart from Manchester City, they could go and play in any midfield,” Gary Neville said of Soucek and Rice after their stellar showing in the dismantling of Leicester on Monday. Both screen the defence brilliantly and while Rice marauds forward with the ball at his feet, Soucek isn’t far behind to get his noggin on the ball in the box.

Declan Rice in the Premier League so far [ranked]:

3) Fabinho and Jordan Henderson (Liverpool)
Makeshift centre-backs for a big portion of last season, Liverpool really struggled without them in the heart of midfield. Much has been made of not signing a Georginio Wijnaldum replacement, but if this pair stay fit and sit in front of a revived back four, it won’t matter too much who joins them.

2) Ilkay Gundogan and Rodri (Manchester City)
Gundogan’s change of role last season – which saw him finish as City’s top scorer – means he can no longer be classed as a defensive midfielder. But their defensive record last suggests just one will do. One though, not none, Pep.

1) N’Golo Kante and Jorginho (Chelsea)
An easy top pick. They have been vital in Chelsea’s resurgence under Thomas Tuchel and are being well recognised for it. Jorginho joins Kante as a nominee for the UEFA Men’s Player of the Year – an incredible turnaround considering the flack he received for much of his early career at Stamford Bridge. Mateo Kovacic could replace either one and they would still rank very highly.