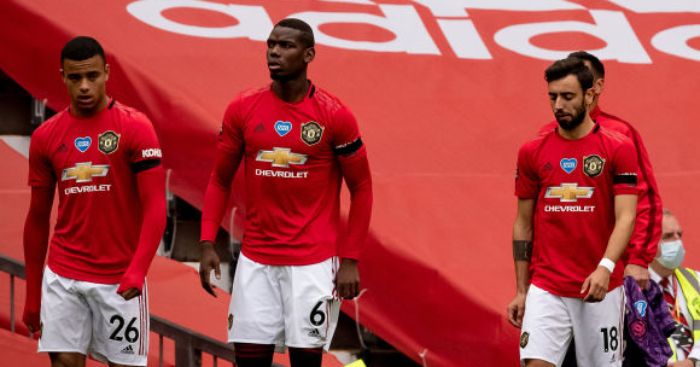 The wait has been longer than a pregnancy and, one assumes, often as exciting and painful. Ten months had passed since Man Utd last occupied a place in the Premier League’s top four but they will start the final weekend with a slight advantage in this breathless race between themselves, Chelsea and Leicester.

If defeat is avoided against the Foxes at the King Power Stadium on Sunday, Champions League football will return to Old Trafford. It means little in reality but the fact it was a narrow win over Leicester in September that last saw Man Utd as high as fourth in the table adds a neat wrinkle to the game.

It was after that match that Ole Gunnar Solskjaer spoke of his “big squad” and the balance required in “getting them ready for when they are needed”. Considering Ashley Young, Andreas Pereira, Juan Mata and Daniel James all started, with Fred, Tahith Chong and Axel Tuanzebe coming on during the charming innocence of football’s three substitutions era, United’s evolution since has been plain to see.

No such passengers were named to face West Ham. David de Gea predictably started despite laborious suggestions to the contrary; Victor Lindelof formed a panic-inducing right side of the defence with Timothy Fosu-Mensah; and the favoured front six were all restored to the starting line-up. It was, sans the full-backs, Solskjaer’s preferred first team.

That in itself, in this stroll turned stumble, stride and now slight stutter of a season, encapsulates United’s current problem. These players are drained both mentally and physically, the toll of ten games in 34 days plain to see, and either their possible replacements not good enough to be trusted or their manager too reluctant to rotate.

Solskjaer might believe that if it ain’t broke, don’t fix it, but sometimes cracks in the machine develop gradually instead of instantly.

Bruno Fernandes has started all eight Premier League and two FA Cup matches in little over a month. Harry Maguire the same. Marcus Rashford, Mason Greenwood and Nemanja Matic have played in each of them and Lindelof, Aaron Wan-Bissaka and Paul Pogba have missed just one apiece. With De Gea thrown in, Solskjaer is relying on a core group of nine players to feature constantly in high-stakes gambles every three days.

And it really is starting to show, as has been the case for most sides since lockdown. Man Utd were sluggish, lethargic and any other synonym you can find for ‘a bit shit’. They lacked energy and urgency in equal measure. It was tiring to watch them for the best possible reasons between February and June but July has brought an entirely different kind of observational fatigue.

West Ham were the better side, even if their opener was both fortuitous and against the general run of play.

That is testament to United’s spirit in clawing back to earn a draw. Greenwood’s goal was excellent in its conception and execution, neat link-up play with Martial consummated by a characteristically ruthless finish. The hosts did not have another shot on target thereafter as the realisation of what could be lost set in before the comprehension of what is still to be won.

This was, in many ways, a perfect point: from behind against a team high on confidence to ensure they themselves keep control of their own destiny. It was the equivalent of a fuel gauge showing empty but enough residual petrol being left in the tank to drag Man Utd to their next destination.

The only thing left is to cross the line before Leicester and Chelsea, whether they stagger or sprint. These last few games have been perhaps the first in Solskjaer’s entire reign where results have taken precedent over performances. One final push is needed.