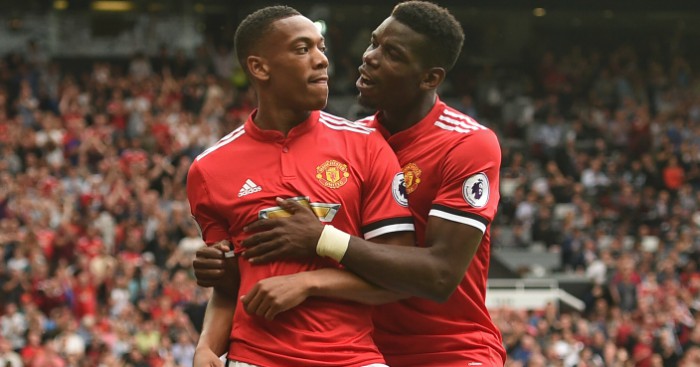 Monday morning’s Gossip has linked no fewer than ten players with a Manchester United exit this summer. So who should stay and who should go?

Sergio Romero:
Happy to be a stand-in, which makes sense given he’s spent almost his entire club career being just that – STAY

Joel Pereira:
“We have a third goalkeeper that I think will be the best Portuguese goalkeeper of the next generation,” said Mourinho last year. But it is time he spent a year continuing his development away from United in someone else’s first team on loan – STAY

Victor Lindelof:
Struggled for form and a regular game – factors which are probably linked – since joining from Benfica for £30million last summer. But it is certainly too soon to write off the Sweden centre-half. His improvement should continue next season – STAY

Eric Bailly:
Still prone to ridiculous lapses but seen by many as United’s best centre-half. Good fun to watch, which isn’t always a compliment – STAY

Phil Jones:
If Mourinho wants a centre-half this summer then one of his established defenders will have to go and Jones seems to be at the front of that line, given how much the manager apparently rates Marcos Rojo. Staying fit is Jones’ biggest problem. Everton are supposedly interested, and it would not be a surprise if the 26-year-old followed Jonny Evans’ lead in taking a step down to move forward again – GO

Marcos Rojo:
Signed a new contract last week and the Argentina international can play across the back four but remains far more comfortable in the centre. Mourinho would likely appreciate the chance to see him and Bailly as a pairing but injuries have seen the duo start only six Premier League matches together since the start of last season – STAY

Chris Smalling:
Viewed as being suspect in possession and Mourinho has spoken this week about the need for his centre-halves to have the character and class to pass forward between lines. That, though, is not Smalling’s strength, as England boss Gareth Southgate has discussed. Still, the 27-year-old is a fine defender and the dirty work still needs to be done – STAY

Daley Blind:
Mourinho said during his first press conference as United boss that he wasn’t so keen on multi-functional players, preferring specialists for each position. Many presumed that meant curtains for Blind but he still played 39 games last season. This term has seen less involvement, though, and a parting seems inevitable – GO

Luke Shaw:
Whoever you feel is to blame, there seems to be no going back for Shaw under Mourinho. Ta ra, Luke – GO

Ashley Young:
Young’s form certainly hasn’t helped Shaw’s predicament. Regardless of his limitations as a left-back, the England international has been one of United’s best players this season – STAY

Antonio Valencia:
United’s captain and a player Mourinho has repeatedly called the best right-back in the world. He’s going nowhere, but might benefit from some competition and the presence of top-notch cover – STAY

Matteo Darmian:
Seems almost certain to return to Serie A in the summer, which is probably for the best for all concerned – GO

Nemanja Matic:
Remember when everyone said how magnificently Chelsea had done to sell Matic and get Tiemoue Bakayoko? Good times. Matic has started every Premier League game this season while establishing himself as one of Mourinho’s blue-chip players. The manager has repeatedly held up the Serbian as an example of the type of character he wants his players to be – STAY

Paul Pogba:
Unless he sees his arse – with Mino Raiola pecking his head, it’s not entirely unlikely – United would be daft to sell Pogba. But something has to change. The record signing must look at himself before pinning the blame for his struggles on anyone else. For supposedly one of the best midfielders in the world, there are a lot of the basic functions of a midfielder that he seems to think are beneath him. But we all know what he is capable of, and he can yet live up to the hype – STAY

Juan Mata:
Why would anyone want to get rid of lovely Juan? Aside from being lovely, he’s bloody useful too, offering more guile on the occasions Martial and Rashford are running down blind allies. With Mata in the XI, United have an 83% win ratio. Without him, that more than halves to 41% – STAY

Michael Carrick:
Retiring at the end of the season to join the club’s coaching staff – GOING

Ander Herrera:
The Spaniard was named the club’s Player of the Year last season but this term has started only eight Premier League matches. It is difficult to see how his involvement will increase next season, especially if Mourinho recruits another midfielder. Everyone’s favourite snide at Old Trafford, but he may have to move on if he wants a regular game – GO

Marouane Fellaini:
Yet to agree a new contract beyond the end of the season in the face of Mourinho’s encouragement to do so. The manager trusts Fellaini, despite many outsiders wondering why. The big Belgian has his assets but should he be starting in central midfield for a club with aspirations of reaching the Champions League quarter-finals? Probably not – GO

Scott McTominay:
Currently being used by Mourinho to tutor Pogba on how to play in his midfield – STAY

Romelu Lukaku:
Played more minutes this season than any of his team-mates and Lukaku has evolved his game to become the perfect centre-forward for Mourinho. Another forward may sign in the summer, but certainly not as the Belgian’s replacement – STAY

Marcus Rashford:
Despite concerns for Rashford under Mourinho, no player has played more games for this manager at United. He may not have had the minutes playing through the middle that he might’ve liked, but that doesn’t seem to be a major problem for the academy graduate, so nor should it be for anyone else – STAY

Anthony Martial:
Martial is one of Mourinho’s greatest challenges at United. The France forward has thrilled and frustrated since moving to Old Trafford in 2015, with the balance between either fluctuating wildly almost on a game-by-game basis. Sanchez’s arrival complicates matters, but Mourinho cannot be seen to make the same mistake he supposedly made with Mo Salah and Kevin De Bruyne. Martial himself also needs to banish the doubts over his own attitude but it will take a team effort if the 22-year-old is to realise his potential at Old Trafford – STAY

Alexis Sanchez:
United are not going to get rid of their star signing – unless Alan Shearer’s theory proves to be correct – but being benched this weekend was a warning that Mourinho expects far more for United’s money. That said, Mourinho is clearly yet to figure out how to best use the Chilean, who has played across the forward line in his six Premier League appearances so far. There is plenty of work for the player and manager to do, but, of course… – STAY

Zlatan Ibrahimovic:
The veteran has barely played since re-signing, but the deal made sense when it was agreed last summer. A move to MLS seems only a matter a time – GO

More from Planet Sport: McIlroy returns to winning ways; Tiger back with a bang (Golf365).