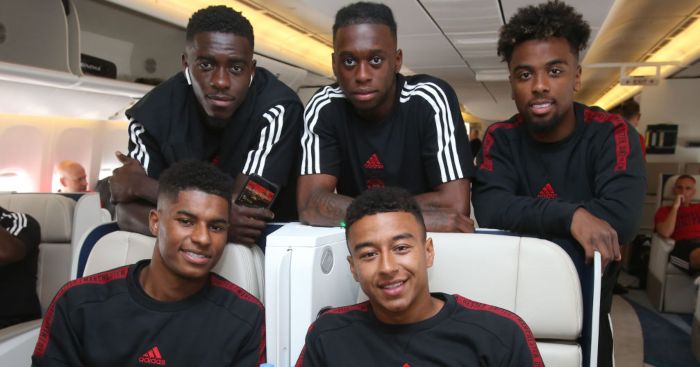 Send your mails to theditor@football365.com…

Reasons for optimism at Man Utd
Since the departure of Ferguson, Manchester United has continued to flounder, be it in the transfer market, appointment of managers or even when it comes to negotiating contracts with existing players. Until a Director of Football is appointed, they are unlikely to sort out this mess. However, despite all these misgivings, I believe United will finish in the top 4 this year.

Liverpool and City are too far ahead for United to catch up to until they fix the issues highlighted above. Tottenham has a great first 11 but lack depth yet will probably still finish ahead of United. However, the 4th spot is United’s for the taking.

Chelsea have a novice manager who may need time to settle in. But more importantly, they have just lost their best player. Have been hit with a transfer ban so they can’t sign any replacements. Do not have a capable striker other than an ageing Giroud and an unproven Bathsuayi. Even with Hazard, they scored the lowest number of goals in the PL last season and that stat is likely to get worse this year. Their squad also lacks depth and 6th place is where they will likely end up.

That only leaves Arsenal to compete with for the CL spot and given the limited budget Emery has to operate with, one would not expect Arsenal to put up that strong a challenge. They do have a strong forward line which should push United but will probably fall short. Even if United finish 5th, there’s always the backup of the UEFA cup where too, their strongest challengers will be Arsenal.

As far as United is concerned, they seem well on their way to fixing the back line. Bissaka is a great addition (if a tad expensive) while getting someone like Maguire will sort out the CBs issues that United had last year. Shaw remains an unknown entity and this season will show whether he can finally flourish or will he be their weakest link in defense.

The forward line has immense amounts of potential, but they still lack a goal scorer in the mould of Kane or Salah who can guarantee them 20 goals each season. That looks unlikely to be fixed this year.

The midfield too remains a quandry. If Pogba stays and Bruno Fernandes is added to the ranks, they will still lack a top class Central midfielder. None of the rumors in the transfer market seem to suggest that United will be able to secure one this summer. They have been strongly linked to Longstaff but he too is an unknown entity and definitely not the level yet that they require. For me, this this is the biggest weakness and an area they will be repeatedly found wanting this year..

These are definitely reasons for concern for United and why we will not see them even close to the top 3 this year, but given the travails of Chelsea and Arsenal, the 4th spot is theirs for the taking.
Adeel

Local teams – by travel time and flight availability
On the subject of local teams, it occurred to me that it would be interesting to slightly modify the thought experiment – focusing on travel times rather than distances. Particularly with those of us living overseas.

(Same logistics for the return journey, other than likely walking instead of taking the bus).

This means foreign fans can attend a Brentford FC Saturday 3PM kickoff, without spending the night, as long as your flight lands at LHR before 1PM, and departs from LHR after 6:30PM.

I imagine that other fans with other flight connections have similar itinerary proposals. Geneva doesn’t have frequent connections to Manchester, Liverpool, Birmingham – but I bet Irish and Scandinavian fans could do something similar “up north”. There is also potential to look into the same with Southend United, Crawley/Palace/Brighton (Gatwick), and Tottenham (Stansted).

I would be hugely surprised, however, if anyone can come up with a more convenient 1 day itinerary than the one for Brentford!
Oliver (in case you’re wondering, I was dragged along by a friend who was obsessed with the show People Just Do Nothing) Dziggel, Geneva Switzerland

Having read your article on ‘ridiculous’ transfer fees in football, I thought that a way of explaining these valuations is similar to certain transfers in pensions (yawn I hear you repeat but hear me out).

Pensions are very valuable and saving for them and using them wisely is very important for individuals and will depend on their own circumstances.

Now if you transfer a DB pension to a DC pension pot you might be surprised at how high the CETV (cash equivalent transfer) value is. However, you will be giving up a valuable guaranteed asset and investing it where there are risks. However, it’s easier to access and you will be able to take it earlier potentially making it more useful for you depending on your circumstances.

Now, if you have a CETV worth £30K+ which probably will be more than likely, even with short service, financial advice is required before transferring because you’re giving up a valuable asset.

If anybody is still awake: Zaha, for example, is a DB pension to Palace whereas Arsenal want him for their DC pot so whereas I don’t think he’s worth it and Arsenal should look elsewhere, I totally understand why Palace value him at that price.

My adopted club and previous winners of the old European Cup, PSV Eindhoven, are actually fortunate in that, starting in a couple of weeks, we only have to play six matches over three rounds just to get to the group stage! I haven’t added them all up, but more games are probably played before the group stage actually starts than after.

If I sound a bit bitter, it’s because I am. In the 25 years that I’ve lived in the Netherlands, the Champions League has gradually been altered to the point where I am sure that there are now fewer genuine champions of European leagues in the main competition than non-champions.

Surely the time has come to restore a bit of balance. Balance out the number of clubs from the major leagues in the Champions League that I accept bring in the most money for UEFA (surely three per country is more than enough) with the minor leagues, move the fourth club to the Europa League and balance out the prize money there to make it less of an ugly duckling competition and so more attractive to TV and audiences.
Tim Royall GFC

England v Sweden
Bit late with this but here goes; a great competition even if USA winning felt a bit like Man U in the 90s/00s. Note, they had an English coach and a Swedish assistant coach to get them there. ;-)First to the “nonsense match” – it seems third place matches don’t matter… to the losers (note see Argentina v Chile where neither appeared to care before, then fought like crazy to win and then both appeared not to care after). So, I would like to see Phil Neville telling the Swedish players that Bronze didn’t matter, starting with Nilla Fischer. Yesterday over 20000 people crammed into a square in Gothenburg to celebrate them coming home (this would be equivalent to over 100000 in England) and it was live on tv. I know these things are relative (to expectation, whether realistic or not) but it’s a freakin bronze medal from the world cup! Hell in some light it even looks gold! 😉

The match itself wasn’t great, but Sofia (please pass more!!!) Jakobsson’s finish was good, and Fran Kirby’s goal was great. Sweden did well to win after losing three players to injury and third is (to reiterate) a great accomplishment.

The final was also a bit disappointing, strange that the Netherlands are World Cup runners up despite apparently playing badly the whole competition. Funny that the BBC website reader’s player ratings had every Dutch player above any US player and I couldn’t find any comment on that from the BBC. Was the BBC’s choice of Rapinoe as player of the match (good as she was) political when Van Veenendaal gave a 9/10 performance in goal for the Netherlands?

Which brings me to my overall highlight, the generally excellent goalkeeping. There’s a lot of criticism of women’s goalkeeping (as there was to African teams’ keeping 20+ years ago) but at the world cup there were some amazing displays. I hope this encourages girls to play in goal because (here at least) no one ever wants to play in goal!

As for how to get more girls playing football, it has to start young and attitudes have to change. It’s interesting, my daughter is currently on a football camp in England and she commented that she instantly noticed that English boys are a lot more sexist and derisory to the girls than here. First step, there have to be clubs formed so girls can play, I know friends in England who quit simply because there was no team.

I agree with others who have said girls need to be encouraged to watch football too. There seems to be a lot of complaining that men don’t watch women’s football whilst ignoring the fact that not many women watch women’s football. In a country proud of its equality the Damallsvenskan (Swedish women’s top league) has an average gate of 908 and the Allsvenskan (men’s) has 9042! A crowd of 900 is not going to support wages. Clubs need to be more active in schools and communities to get people to matches.
Rob, of Sweden (Lucy Bronze didn’t win Bronze but won the Silver ball, confusing…)

An XI of refusing to turn up for work players
JC STFC wants an XI of players who refused to turn up for work. oh go on then I will deliver you all one, a classic 3-4-3 formation, just don’t expect any of them to actually play a game for the team and not disrupt the dressing room.

GK: Courtois (Trying to force a move from Chelsea to Madrid)

DEF: Sebastian Squillaci (From Sevilla to Arsenal, refused to play in a Champions League qualifier for Sevilla because he knew it would cup-tie him, was it even worth it?)
DEF: William Gallas (Wanted more money, said if he was played he would score own goals)
DEF: Marcos Rojo (Rojo refused to train at Sporting when he tried to force through a move to Manchester United)

MID: Dimitri Payet (Moved back to Marseille after going on strike at West Ham, apparently he didnt like Bilic’s style of play)
MID: Paul Scholes (in protest at being left out of Sir Alex Ferguson’s side for a 3-1 loss at Liverpool, the ginger maestro refused to play in a League Cup tie at Arsenal later that week)
MID: George Best (After going on a three-day bender after Manchester United’s lost to QPR in January 1974, he returned only to be dropped and then go on strike, refused to play until November of that year, when FIFA oversaw his release.)
MID: Kieron Dyer (The midfielder refused to play on the right side of midfield in a match against Middlesbrough, during a run of results which led to Sir Bobby losing his job.)

FWD: Pierre Van Hooijdonk (He asked for a transfer, and when one was refused he simply decided to stop turning up, going back to Holland to train with NAC Breda)
FWD: Dimitar Berbatov (Refused to come on for Tottenham in a league game after being annoyed at being named on the bench, a year later, he threw in a second strike aimed at forcing through a move to United)
FWD: Diego Costa (Disappeared to Brazil after the infamous Conte text message saga, later sold to Atletico)
Mikey, CFC (Apart from the defence, this is quite a strong line up)