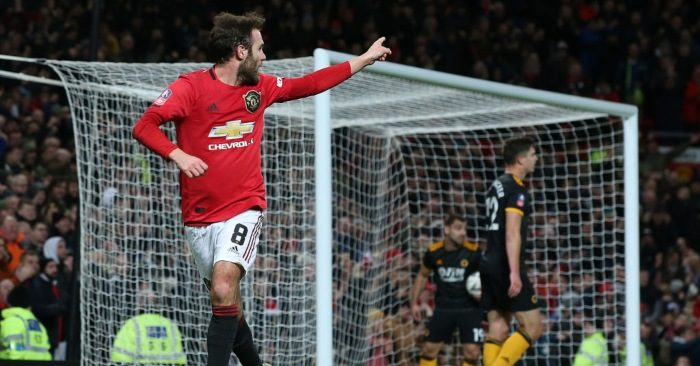 Manchester United are still a name. They’re a diminished force and mired in that tedious, never-ending, soap opera crisis, but they’re a scalp to be taken. Particularly at Old Trafford and particularly by sides like Wolverhampton Wanderers, who are hunting emblems indicative of their progress.

In a slightly perverse way, winning on this ground might indicate something more than it used to. When United were at their very best, teams used to take points from them almost by fluke. Now, the challenge isn’t nearly the same, but it provides a different sort of examination. Knowing what United are and where their flaws lie, can these visiting teams forget that past reputation and play with proper authority? Can they step on this team’s neck and stop their blood flow?

Having that ability feels like the next step for Wolves and this was a good opportunity to take it. Player for player they are the better side. Manager for manager they certainly are. It was interesting, then, to see them treated as such outsiders before the game. Some bookmakers priced them as high as 4/1 against before kick-off and what is that other than a lack of respect for their quality?

Reliably, United looked vulnerable on Wednesday night. They have a habit at the moment of waiting until games begin before deciding how they’re going to play. Or that’s the impression at least. By contrast, Wolves defined the game’s shape, with their three-man high press, their neat work out of midfield, and – initially – the game’s best chances. Adama Traore played in those thrusting, straight lines, while Pedro Neto was positive and productive, wasping around the pitch and zig-zagging with the ball.

Raul Jimenez should have scored in the first half. So should Matt Doherty. Neto did score, only for the pedantry of the handball law to claim another victim.

This was an important game them. They haven’t actually won a game of any kind since that dramatic come-from-behind victory over Manchester City on December 27. They played well at Anfield, but lost. They faced a ten-man Watford for the last 20 minutes at Vicarage Road, but still lost. Most recently, they couldn’t win at home, against a Newcastle team who are just a couple of injuries away from having to name the Alan Shearer statue in their starting eleven.

So that’s the point: they get in their own way.  They have these little lapses which let them down, which leave them just short of what they should be.

What that breeds, in these big games which come with pressure, is the assumption that, somehow, their superiority won’t be enough. That they’ll be able to play all the football, create all the chances, and still lose to some cheap little goal which arrives virtually from nowhere.

Which they duly did.

Juan Mata finished his chance brilliantly well, but it was hardly reward for any sustained pressure. It actually came from a Wolves move which broke down at the other end of the pitch, before the visiting defence somehow found themselves ten yards in front of Mata, with the Spaniard running in alone on goal.

Ridiculous. It was stylish at its end, but an absolute nonsense at its heart.

What will have especially aggravated Nuno Espirito Santo was that United hadn’t really been anything up to that point. John Ruddy had made a couple of good saves with the game at nil-nil, but Ole Gunnar Solskjaer’s team hadn’t carried any sort of identity throughout the game. They hadn’t stood for anything. It’s hard to remember a single moment of cohesive attacking football they produced, or their craft drawing so much as a ripple of appreciative applause from their fans.

What did they have to do to win that game? Other than exist. Other than stand around and watch Wolves butcher their own chances.

And that was good enough.

It all sounds very harsh on Wolves. This is a team, remember, whose season began in late July and who have been on the dreaded Thursday-Sunday circuit ever since. Nobody should forget that, neither should they underestimate how difficult the Europa League is to cope with. But they definitely had the energy on Wednesday night and that game was theirs for the taking.

And they need these matches. They have the players and they have the right manager. What continues to elude them is the capacity to win when they should. Call it efficiency. Call it being mechanical. That quality’s absence is what separates Wolves from being the side they should be.