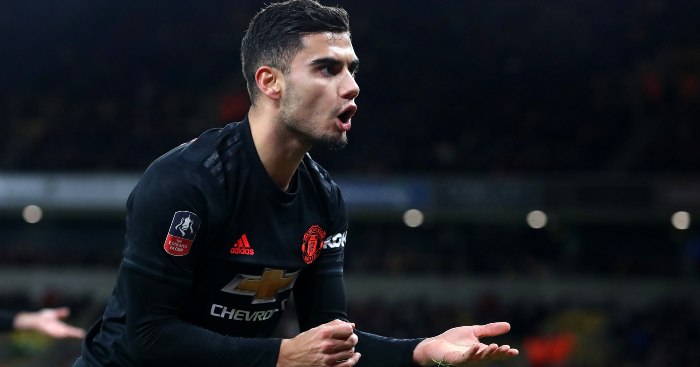 Manchester United boasted about looking at 804 right-backs before settling on Aaron Wan-Bissaka. On that basis, the Vitamin D deprived occupants of Carrington’s transfer bunker must have looked at around 100o central midfielders by now, and far too many will be better than the options United currently have. At least one must be attainable and capable of immediately improving the Red Devils should they act decisively in the transfer window.

The fact we cannot presume that they will is another damning indictment of how business is conducted at Old Trafford these days. United officials spent much of the early season patting themselves on the back after an expensive summer, but half a season on, the need for reinforcements could not be more clear.

Initially it was thought that United would move for a centre-forward and had they not refused to be bogged down in Mino Raiola’s bullsh*t, they might have got Erling Haaland. But it wouldn’t matter if Ole Gunnar Solskjaer was to be presented with Robert Lewandowski or Harry Kane when he shows up at Carrington in the morning since United’s overwhelming concern is the creation of chances, not the conversion.

In the goalless FA Cup draw with Wolves at Molineux, United failed to register a shot on target in a domestic match for the first time in five years. Louis van Gaal was the manager then but such embarrassment is nothing new to Solskjaer’s side. They were similarly toothless against AZ Alkmaar in the Europa League earlier this season.

0 – Manchester United failed to direct a single shot on target in a domestic league or cup game for the first time since January 2015 vs Southampton in the Premier League. Barren. #FACup pic.twitter.com/E8HFv2RWNg

Solskjaer could certainly do with a centre-forward but the squad’s most gaping void can be found in central midfield. Some clubs would give their managers both but United bosses since Sir Alex Ferguson have had to learn that you can’t have everything.

Unless Ed Woodward suddenly becomes competent, then Solskjaer will probably have to be grateful for reinforcements in just one of United’s two problem areas – and part of the problem is, he will be ever so grateful. Inconsistency, in form and presence, is the forward line’s biggest flaw. Inability in midfield is a more urgent concern.

Solskjaer and Woodward seem to believe that Paul Pogba is going to ride to their rescue when quite clearly he has no desire to do so. Pogba is injured – we are told – but the record signing has never been subtle with his desire to quit the club. This will be the fourth window Pogba has spent longing for Real Madrid or Juventus to come to his aid. It has gone on long enough that United should just take the best offer either club has to make.

Selling Pogba would provide clarity where the only other thing for certain about United’s midfield options is that they are way below the required standard.

Against Wolves, Solskjaer paired Nemanja Matic with Andreas Pereira. A dynamic duo they are not. Matic was a vital cog in Jose Mourinho’s XI but these days, the Serbian simply slows down Solskjaer’s spluttering machine. Always looks forward, then passes sideways. What is Pereira? In these complex times when we are told a midfielder must specialise in going either way, the Belgian-born Brazilian excels around neither box. He can’t screen a defence, and whether playing in the midfield base or a front four, he can’t crack one. Pereira is United’s perennial passenger on the slow road to nowhere.

Matic and Pereira teamed up because Solskjaer had little other option. Fred was left on the bench alongside Marcus Rashford with both having started United’s last 12 matches. The £52million Brazilian has shown some improved form during that run but it cannot be forgotten how low the bar was. Fred is not the joker many thought; nor is he the answer.

MUFC played nine games in Dec. They’ll play nine in Jan too if they beat Wolves in replay…before playing Wolves again in the league on Feb 1st. Six games v Wolves in 10 months. No wins so far.

Scott McTominay has emerged as United’s most credible midfielder this season but the academy graduate will be missing for “a few months”. In the meantime, United are left with the choice of Matic, Fred and Pereira – presuming that James Garner will go out on loan – and a fixture schedule which sees them in action seven more times by February 1.

Solskjaer repeatedly talks about approaching United’s transfer business with the long-term in mind but the current scarcity of choice is not going to improve beyond the next few weeks and months. Matic will leave at the end of his contract and Pogba will push harder than ever to follow him through the door.

United simply must act this month. If their recruitment operation is as extensive and efficient as they would brief you, that won’t be a problem.