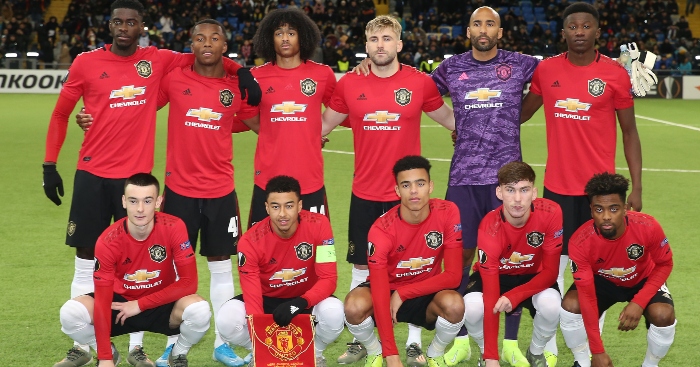 Manchester United’s beaten team in Astana featured four new starters, seven debutants and nine academy graduates. So who are they and how did they do?

Lee Grant
At the tender age of 36, United’s third-choice goalkeeper was making his first Red Devils start as comfortably the most senior player among Ole Gunnar Solskjaer’s ranks. On his first start in any team for a period a day short of two years, Grant’s handling was clean and no blame could be apportioned to him for either Astana goal. But Solskjaer will hope we never see him again.

Ethan Laird
“He’s a full-back in the mould that we want: he’s physical, he’s quick, he’s strong, technical as well when he’s driving forward,” said Solskjaer of the 18-year-old after taking him to Belgrade for the draw with Partizan and on his senior debut, Laird demonstrated all those qualities. In the first-half, the Basingstoke-born defender was arguably United’s most persistent threat and he completed more take-ons than any other player while enhancing his prospects of further first-team involvement more than any other youngster.

Di’Shon Bernard
His own-goal proved decisive but the 19-year-old’s debut should not be remembered for that misfortune. The left-sided centre-back, who joined United from Chelsea as a 16-year-old in 2017, looked assured in the first-half and though his unfortunate contribution came a few minutes after a near miss when slicing a cross over his own crossbar under little pressure, Bernard did his prospects little harm. He just has to get past the 427 other centre-backs on the books at Old Trafford…

Axel Tuanzebe
It’s hard to know where Tuanzebe stands in that centre-back pecking order. Third, probably, behind only Harry Maguire and Victor Lindelof, which made this appearance more about getting minutes under his belt after injury rather than scrutinising his first-team prospects. Perhaps his leadership credentials were under greater examination as the senior centre-back and comfortably more experienced than the debutants either side of him. We can’t judge that, but his defensive contribution was sound, other than buying a dummy in the build-up to Astana’s leveller. Now to displace Lindelof…

Luke Shaw
The former England defender was playing his first game in 96 days since injuring his hamstring in August and the rustiness was evident. Shaw played at one pace whether going forward or retreating back once United had lost possession. The mental cobwebs were evident midway through the first half when Shaw switched off to allow a hopeful ball across the box to penetrate the space between himself and Bernard, with Dorin Rotariu wasting the opportunity he should never have been allowed. The left-back should have had an assist to his name when neat interplay with Angel Gomes teed up Tatith Chong for a chance he inexplicably missed. With Brandon Williams seizing his firs-team chance, Shaw desperately needs to get fit, stay fit, and put together a sustained run of form.

James Garner
Solskjaer has never been afraid to give Garner the big build up, describing the 19-year-old earlier the season as the ‘new Michael Carrick’. Playing in front of the back four, the England Under-20 international offered a Carrick-type performance of understated simplicity – but we know from his displays in the Under-23s that Garner can do more. He cannot be blamed for feeling his way into the first team and creative opportunities were limited here with Astana so deep and Jesse Lingard persistently dropping to within a few feet to demand the ball. Garner certainly deserves more opportunities, especially when you consider Solskjaer’s other senior options at present.

Dylan Levitt and James Garner went to the same #MUFC development centre as kids, came through Littleton Road to the Aon Training Complex, and now they're set to be the two-man holding midfield in an away European tie as teenagers.

Dylan Levitt
On his first appearance in the senior side, the 19-year-old Wales midfielder had more touches and finished with a 96 per cent accuracy rate having made 104 passes – 20 more than anyone else on the field. His Under-23s relationship with Garner was evident, with the pair nicely dovetailing as Levitt looked to join up with the attack while his midfield partner sat further back. With the second string, Levitt has scored three goals and made four assists and he too will be looking for further involvement while Fred and Andreas Pereira are United’s only fit central midfielders.

Jesse Lingard
Lingard captained United and scored, giving travelling fans two things they presumed they would never see. It was his first goal in 10 months and only his the second goal of the season in which he has played a direct role, following a simple pass which teed up Mason Greenwood against Rochdale in the Carabao Cup. Lingard played in the No.10 role but for much of the first half kept dropping on to the toes of Levitt and Garner, rather than penetrate the space between the static Astana midfield and defence. Presumably after half-time instruction to stay higher, the skipper found pockets but too often overran the ball on the artificial surface.

29 – Jesse Lingard has scored just his second goal of 2019 for Manchester United, and his first in 29 appearances in all competitions since netting against Arsenal in the FA Cup in January, 307 days ago – this was his longest run without a goal at club level. Beans. pic.twitter.com/cqZ2wnEZFc

Tatith Chong
It just isn’t happening at senior level for Chong. On his third first-team start, one of eight senior appearances this season, the winger’s most notable contribution was an appalling miss when presented with a golden opportunity to score his first senior goal. With his strongest foot, Chong passed up a gaping goal, shooting over from six yards. Less than a minute later, Astana levelled. Within 10 minutes, the 19-year-old had been hooked without showing any evidence that he is ready for this level. A January loan looms large for the Holland Under-21 winger.

Not even a minute later Astana equalise 😶 pic.twitter.com/zGla6jX0cL

Angel Gomes
The 19-year-old came out of the trip to Kazakhstan with rather more credit than Chong, but he too perhaps needs a January loan. With Lingard in the centre where Gomes can certainly play if his Under-23s form is any yardstick, the England Under-19 World Cup winner was shunted to the left where he will always drift inside. He created more opportunities than any team-mate, but his own chances to establish himself in the first-team squad this season are likely to be limited. The 5ft 5in London-born attacker is surely one of the players Solskjaer has earmarked for a temporary switch in the New Year, preferably to somewhere he can play centrally.

Mason Greenwood
Many of Greenwood’s first-team minutes have come on the flanks but playing as United’s centre-forward, Greenwood was a huge threat in the early stages while Astana played high enough to allow the 18-year-old to play on the centre-back’s shoulder. When the hosts retreated, Greenwood found it more difficult to find space, but he remained United’s most dangerous player despite not getting sufficient service – something he will have to get used to at United in the present circumstances.

D’Mani Mellor (for Chong, 65)
The Mancunian forward has prospered in the Under-23s this season while Greenwood has been with the first-team and three goals and four assists in the Under-23s have earned Mellor his own senior bow. The 19-year-old struggled to carve out any opportunities while United chased an equaliser and Astana sat back, but his selfless approach will earn his more appearances and ultimately a decent career in the game, even if he struggles to become a regular with his home-town club.

Largie Ramazani (for Garner, 84 )
United’s sixth of seven debutants in Kazakhstan, another tricky forward capable of playing across the line, looks up even at Gomes at 5ft 4in but the 18-year-old Belgian has been making a big impression in the Under-23s, scoring eight goals and offering a couple of assists in 11 matches so far this season.

Ethan Galbraith (for Gomes, 89)
The central midfielder was already a full Northern Ireland international before coming off the bench to get his first couple of minutes in the United first-team.