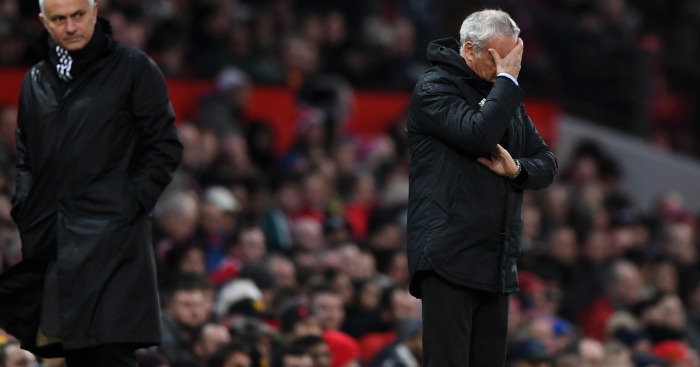 Ashley Young put the home side ahead early on and Juan Mata doubled United’s lead after 28 minutes. Romelu Lukaku added a third from close range just before the break.

Fulham pulled a goal back with a penalty on 67 minutes through Aboubakar Kamara, but the Cottagers were soon reduced to 10 men when midfielder Andre-Frank Zambo Anguissa collected a second yellow card.

Marcus Rashford scored a fourth for United with seven minutes left as United relieved the pressure on Mourinho.

But Ranieri was furious at his side’s application during the opening period.

“In the first half it was 11 lambs against 11 wolves,” he told BBC Sport. “The wolves ate the lambs. The second half was much better but I have to consider if that was a down from Manchester because they were winning 3-0 or we made a good performance.

“We have to be stronger, more confident in our qualities. Without the strength, the power, it is difficult. Manchester United have everything – qualities, power.

“In the first half we were shy, we were waiting. Why? Why were we waiting? Go, play football. Then, if they score, it is normal. I want my team to play and fight for every single ball. In the second half, we did. Why we didn’t in the first half, I need to speak with my players.

“The response in the second half was positive. We played with more intensity, we were hungry, everything better than the first half. The first half was a warm-up.”