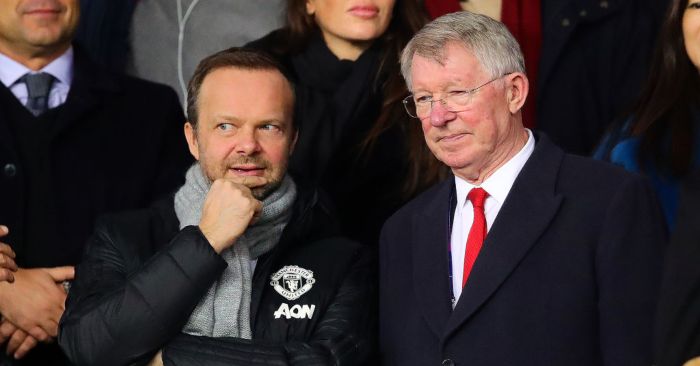 Send your thoughts to theeditor@football365.com. Otherwise the afternoon Mailbox will just be a collection of spam…

Lies, damned lies and statistics
So, Ed Woodward has to put a positive spin on the disappointing first quarter earnings report for Manchester United, and predictably we get a dose of meaningless statistics and nonsense,

Were these anything to do with matchday revenues, sponsorship income, merchandise sales, expenses management or anything else that anyone interested in the earnings report would be questioning?

Nope, Ed pulls out the usual platitudes, that there is a “clear vision” in “philosophy” and “recruitment”. Please give me his job, I could do so much better with the bullshit bingo.

And then .. the the great lies, damn lies, and statistics. “[we] are proudly approaching a milestone* 4,000th game** featuring an Academy*** player …”

*Who came up with that “milestone”? I’m not sure anyone has ever, ever (ever) decided that games featuring a bloke from your reserves or youth team is worthy of attention, let alone chalking it up on the dressing room wall and counting up to 4,000, or 40, or ten, or 427, or whatever number the dart hits as a “milestone”

** United have played around 5,600 competitive games since 1902 when they changed their name from Newton Heath, so I suppose 4,000 games with a local lad isn’t bad, except for the fact that for the first 100 years they were pretty much all local lads … and …

*** The Academy was founded in 1993, so he’s saying that United have played at least 4,000 competitive games in the last 26 years. That’s a lot of legwork, no wonder the kids had to fill in. It’s a match every other day. I understand now why Sir Alex Ferguson decided to skip the FA Cup one year. He had no-one who could walk, let alone run, and even the kids were crocked.

It’s really pathetic. Woodward, he of the wonderful “playing performance doesn’t have a meaningful impact on what we can do” is perhaps clutching at a little straw or two? The fact that revenues are shrinking, and the performances are still insipid? OK, in his mind he thinks it’s enough to toss out a couple of buzzwords and meaningless stats. Maybe he’s been listening to Sir Alex Ferguson, visiting Professor at Harvard, and taken the Harvard Business School Kool-aid that brought us the financial crises of the 2000’s – except in this case, there’s no government bail-outs, just shocking performances that leave the fans dismayed.

Please give me his job.
Steve, Los Angeles.

Mignolet’s moan
Seeing as Mignolet’s memory seems as strong as his goalkeeping ability in this article where he caterwauls about his apparent lack of chances under Der KloppMeister I would like to briefly point something out to him; seeing as he’s reading this, natch!

In the 2017 season 22 ‘keepers played more than 5 games. Of those (ranked by saves, goals conceded, saves per goal and save percentage) take a wild case where the Belgian Bun came? That’s right pop fans – rank bottom. Even bringing into play the xGA figures (the toughness of the shot) he really, really was poor.

To put some context on this using the aforementioned criteria:

Cut, slice and dice it anyway you like he was awful and whilst Karius hardly pulled up any trees he was slightly better but still below average. For a team with top6 ambitions he, perhaps even both, had to go. Top of the pile, for reference was Pope’s Burnley with 57saves, 11 goals conceded, 5.18 saves per goals and 84% save percentage…

Mind you, to be fair, they both topped the table when it came to ‘errors leading to goals’ so they did excel at that; I guess…
Gregory Whitehead, LFC

Changing positions
I like the sound of Mikey CFC’s “which player do you think should change position?” game for the mailbox.

As an Everton fan, I would love it if Morgan Schneiderlin could become a midfielder.

England aren’t France
Is anyone else a bit sick of seeing pundits like Chris Waddle stating that even though England have been hammering their smaller opposition in qualifiers, due to their apparent defensive issues “they’re just not looking like France or Germany”. The same France who lost to Turkey, and who were behind to Moldova and haven’t scored as many as England and have conceded the same amount? Just saying.
Scott, Nuneaton

Kane the GOAT
Ronaldo has 99 goals in 164 games.
If Harry Kane keeps us his current scoring ratio for England right through to 164 caps, he’ll have 117 goals.
Make that 120, as he’ll probably claim a few extra a la Eriksen/Stoke in 2018.
Derek

Ireland fall short
I must say I did not hold much hope going into the game against Denmark after watching the games against Georgia and Switzerland, but Ireland actually played some decent football last night. I have not seen the stats but I would hazard a guess that completed passes, possession, territory were all up significantly and long balls were down.
That being said the Danes helped Ireland a lot. They were not composed in possession and seemed happy to settle for a draw from the outset and just invite the pressure. Losing two players early doors may not have helped.
A lack of quality ultimately undid Ireland again tonight. McCarthy went for a team that had a mix of creative players (Hendrick / Browne) and the usual hard working dogs (McClean / Whelan)
The most alarming stat heading into the night was that Ireland’s last 16 goals had come from 16 different sources. We only scored 7 goals in 8 qualifying matches and a lot needs to be done if we are to come through the playoffs and last night showed some promising signs.

But you can’t help but feel like this was an opportunity lost. We always seem to take the hardest route to major tournaments. Where will this one lead? We were on the motorway to the Euros. Now we’ve taken the wrong exit and are panicking to find our way back onto the open road.
Andy (Irish in London)

…Jesus, I’m sick of reading everywhere that Doherty is at fault for the goal conceded. Duffy is clearly playing the guy on while Doherty is in line with the rest of the back line. If Duffy wasn’t standing about 3 metres behind the rest then it would have been offside. Yet Doherty gets all the blame. You can tell he plays for a top team in the Premier League because his range of passing and his willingness to forward pass is miles above any other Irish player. How has he not been playing before? Coleman is good and all but not to his level of 4 or 5 years ago.
Chris Ireland (rakaia 4sam)