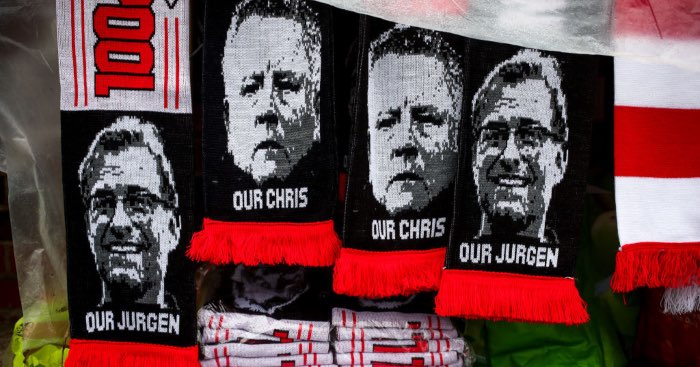 Jurgen Klopp (Liverpool)
Let’s get the obvious pick out of the way early by discussing the manager of the champions. Liverpool had the best start to any Premier League season and were unbeaten for the first 27 matches; Klopp’s side maintained that ferocious start, winning the title in 31 matches, uncontested on account of their brilliance. Klopp has injected a relentless winning streak into his squad and demolished all other competition this season, dropping only seven points on their march to the title.

Liverpool were beaten by Manchester City last season in a photo finish but this year Klopp has dusted himself – and his team – off and admirably gone again. Under the German, they’ve laughed in the face of drama and brushed off such trivialities as suspense, shedding Liverpool of their most unwanted of curses in lifting their first league title since 1990.

Philosophical debate will rage over Klopp’s high-intensity style – they’re not afraid of playing direct and progressing up the pitch quickly – and the more methodical juego de posición of Pep Guardiola. Regardless of your preference, it’s hard to argue with the efficacy of Klopp’s methods this season. Without any fuss, or bluster, he’s brought the Premier League trophy to Merseyside for the first time and anyone looking to take it off them next season will have a fight on their hands.

Nuno Espirito Santo (Wolves)
Another team with a lofty league position and an incredible mastery of the 5-3-2 formation are Wolverhampton Wanderers, managed by the affable Nuno Espírito Santo. When Wolves started off the season in quite a rocky fashion – without a win until their seventh match in the Premier League – it seemed all too easy to blame the annual ‘curse of the Europa League’.

As you look at the table and find the team battling for a Champions League place with six games to go, it’s worth considering that maybe everything is going according to Nuno’s plan. After all, the Portuguese has favoured a small squad all along, not unlike his manager at Porto – Jose Mourinho. Nuno deserves immense credit for sticking to his guns, avoiding bloating his squad unnecessarily and steering Wolves out of that unsteady start, back on the path to Europe.

Wolves have continued an imperious run of form into the post-COVID world, with some suggesting that their low-intensity style makes them perfectly suited to life behind closed doors. With the class and guile of players like Ruben Neves, Joao Moutinho and the much-improved Adama Traoré, Wolves are happy to set the tempo of a game – both with and without the ball they exude an aura of control over a football match. Nuno’s cool-as-you-like, relaxed demeanour is mirrored by his team as they glide through matches, keeping the opposition at arm’s length whilst checking their watch. They’re not to be hurried for love nor money. Wolves press the opposition less than any team bar Newcastle and their incisive counter-attacking is proving lethal to teams who dare to open up against them. All of this in only their second season back in England’s top flight.

The ex-Valencia manager has enhanced his reputation magnificently and there’s no doubt that the Wanderers project is progressing better than many could have predicted. If any of the established top six clubs show weakness – north London springs to mind – the Wolves will surely smell blood.

Chris Wilder (Sheffield United)
Alright, alright, Sheffield United have a made a poor start since the ominously-named Project Restart was launched. This shouldn’t mask the incredible job that Chris Wilder has done this season. A squad that – on paper – was overachieving with promotion last season now finds itself in the fight for the European places with six games to go.

Systems in football are not always indicative of a style and, as the phrase goes, don’t judge a book by its cover. Sheffield United rocking up in the Premier League with a 5-3-2 formation would lead many pundits to slap them with the ‘defensive’ label and move on to the rest of their pre-season predictions starting bottom up with the Blades in 20th.

It’s just insulting. Seriously – insulting. Nobody with this little interest in knowing what they’re discussing, as a supposed expert, should be allowed to receive payment for sharing their ignorance. He was exactly the same for the Nations League draw. He’s lazy and it’s not on. https://t.co/6EfEIfPLON

However, this has proved reductive and plainly untrue as despite having the fourth-best defensive record in the Premier League, they progress the ball brilliantly in attack. Much has been made of Wilder’s use of the overlapping centre-backs and with good reason – the overloads the team creates in the wide spaces have overwhelmed even the top teams this season and their transitions back into a defensive shape are immaculate. There is an argument that where the Chelsea team of Antonio Conte stunned the league with their three-man defence, this United team plays the system with even more cohesion, if with slightly less quality. I’m not suggesting they’re an Eden Hazard away from winning the league, but it’s fun to think, isn’t it?

Peculiarly, they’re also the only team yet to score a goal in added time of either half. They don’t faff about with those late-in-the-day hi-jinks – they simply attack and defend as a unit to great effect. The Blades are a well-oiled machine and Wilder – coupled with squirrel-fearing assistant Alan Knill – wouldn’t want it any other way.

Ralph Hasenhuttl (Southampton)
Yes, Southampton are 13th as it stands. Is this the most remarkable achievement in terms of league position? Certainly not. Perhaps it’s not even the most surprising. When asked at a fan forum last summer, Saints manager Ralph Hasenhüttl openly admitted he would be satisfied with a mid-table finish.

What’s perhaps more important is the course the season has taken, the stormy seas the Austrian has had to sail through and the tangible improvement he’s made to players that have often under-performed. Hasenhüttl came into the season after a summer spent trimming the fat of the squad. Record signings Mohammed Elyounoussi, Wesley Hoedt and Guido Carillo were ostracised and sent on loan without so much as a “good luck” and while it might have been tempting for the Southampton board to demand their manager offer a chance at redemption for these costly castaways, they instead allowed him total authority.

As well as imprinting his philosophy onto the squad and transforming them from wayward dawdlers into the league’s second-best pressing side, the ex-Leipzig coach has stamped his unquestionable authority and infectious personality on the club this season. Hasenhüttl, with his ‘cool step-dad who lets you borrow his car’ vibes, is a master of man-management and a coach who tolerates zero nonsense. It’s not very often a Saints player leaves the pitch without having emptied the tank.

James Ward-Prowse, recently given the captaincy after Pierre-Emile Højbjerg broke the Austrian’s ‘no nonsense’ rule and fluttered his eyes at Tottenham, has led the league in running statistics this season. If you’d told Southampton fans that he’d be leading the league in distanced covered by this stage they’d have asked how long N’Golo Kante had been playing on one leg – or how long Ward-Prowse had been experimenting with stem cells. In truth, Hasenhüttl has worked wonders on the south coast and with some shrewd acquisitions in the transfer market, he might just continue to do so.