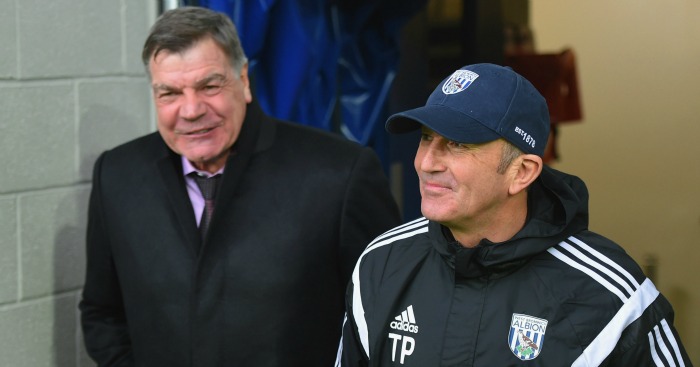 On Tuesday, 22,062 supporters were at the Hawthorns to watch West Brom draw 1-1 with Swansea City, though by the time Salomon Rondon’s equaliser was scored, the attendance was far lower. It was West Brom’s lowest ever crowd for a Premier League home game.

There are obvious factors that influenced such a low attendance. A cold Tuesday night match against unglamorous opponents, high ticket prices soon after Christmas and a home side in lower mid-table hardly made the Hawthorns a temptation for casual match-goers.

Neither does Tony Pulis’ football, best described as functional. Having been appointed on the first day of 2015, Pulis has spent close to £40m on new players during his 13 months in charge, but the Welshman has a knack of making any combination of players look exactly the same as another.

You can see their point. West Brom have taken 12 points from their last 11 matches, scoring 11 goals, and the club’s away fans have seen their team score 26 times in the league in the last two years. During Pulis’ entire tenure, West Brom have only once scored more than two goals in a league match. That came against a coasting Chelsea side who had already been elected champions and were reduced to ten after 29 minutes.

Pulis would shrug his shoulders to any criticism; what you see is what you get. West Brom were not relegated last season, and they will probably not be relegated this. Expecting a 58-year-old manager to change now is like asking a leopard to give back his spots and live life as a cougar.

Until now, ‘Pulisball’ has been sufficient. It was a VIP ticket to Premier League survival, and all the broadcasting revenues that went with it. Richard Scudamore may be an odd Willy Wonka figure, but the picture of Jeremy Peace and his friends careering down a money slide and into a pool of cash isn’t far from the truth. Pulisball was not pretty, but it was practical. Pragmatism over aesthetics was a no-brainer.

At Sunderland, Sam Allardyce sings from a similar hymn sheet. There is an inaccurate portrayal of Allardyce as a dinosaur. ‘Back to basics’ would be a fairer description.

“People try to complicate it by talking about systems and different types of positions and false number nines and stuff like that,” Allardyce said in December. “It is a game of football. If you’re playing against someone, if he’s playing better than you, stop them. Get those simple basics in place and you start getting better as a team.”

Allardyce repeated his maxim in January: “At this level why complicate the game and overplay? When you are struggling, put the ball in the opposition’s half with a bit of quality, squeeze up away from your own goal.”

The insinuation is clear: A team cannot expect to improve quickly by playing fancy football. It is easier to win ugly than win with style.

The landscape has changed. The rise of Leicester City (and, to an extent, Watford) has made plenty of the Premier League’s biggest clubs look very silly, but those below them should feel more foolish still.

The party line was that clubs like poor little West Brom could not cope with the country’s financially bloated elite. They were coerced into bowing down like loyal subjects, taking the scraps of points the kings dropped from the top table onto the floor. The ideal formula was simple: Draw your away games and win your home games against the rest, look for the occasional day of wonder against the best.

Leicester have flipped that wisdom on its head, forcing Premier League owners to scurry and work out how to replicate their rise. “This isn’t in the rule book – who’s in charge here? Guilty! Get a new rule book!”

Not only is Leicester’s wage budget (£48.2m) more than £20m lower than West Brom and Sunderland’s, they also play a style of football that is far more pleasing on the eye. Supporters go to home games not through a sense of grim duty or ingrained addiction, but because they enjoy what they see. There are counter-attacks, passages of neat passing play and attacking substitutions. There is even belief, a communal morale between players, club and fans. Who knew Saturday afternoons could be enjoyable?

Even worse for Pulis et al, Leicester’s rise has not even been a long-term project. Nigel Pearson had Leicester’s players at least sitting in the right seats at the end of last season; their new manager has taken them for a ride in his supercar.

Until now, Pulis and Allardyce were meant to be the go-to guys, the Mary Poppins that clicked their fingers and tidied up the room. Ranieri has proven that grit and spit isn’t the only route to sustainable improvement. So too has Slaven Bilic as Allardyce’s successor.

Managerial pragmatism is not yet dead – there will always be a call for functional to stave off the short-term threat of relegation. But it could soon become defunct as a long-term solution. As coffers grow more full, the line between the bottom and the top may become blurred. If ticket prices are not going to decrease, supporters will expect more bang for their buck.

If bored, envious supporters start to vote with their feet, will we see the last of safety-first tactics as anything other than a last resort? There’s a man in a baseball cap who should be very afraid.