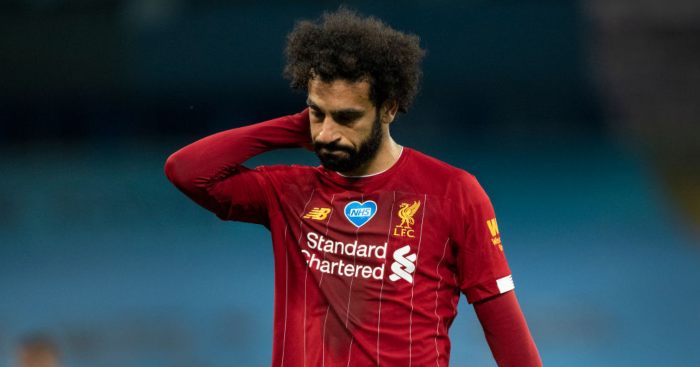 Your ‘Spurs are shit’ mails are over here. So we concentrate on the reaction to Liverpool and their humbling. Read 16 Conclusions and then send your thoughts to theeditor@football365.com

Half-time thoughts
Couldn’t be less bothered about the performance and impending result. Glad to see that the boys celebrated as hard as I did…

…As a fan of a perpetually failing Arsenal team, there is something almost joyful about watching this Liverpool team getting thoroughly rinsed. Clearly doesn’t detract from a phenomenal season, but does detract slightly from their crimes against football this season by dominating all before them.

(Currently 3-0, half-time. I stand corrected if Liverpool storm back with Salah scoring a perfect hat-trick).
Andy

Fuming
No matter if you have won the treble you DO NOT put in an embarrassing performance like that on. Don’t care if they have won it after 30 years but it truly was disgraceful and has taken a shine off the PL win for sure this week.
Ash, LFC

Neat
“This means more”, to “this doesn’t mean anything” in 90 minutes.
Mike D

Do Liverpool have any world-class players?
It’s the 80th minute of the City vs Liverpool game and I just saw Mahrez sat the world-class holding midfielder Fabinho on his ass after KDB does the same to the self proclaimed player of the year, Henderson.

I heard someone say that no Liverpool player can lace KDB’s boot, and you will find it difficult to argue against that assertion. He is absolute class in everything he does. In summary he is world class!!! Which brings me to the question of whether Liverpool actually have any world-class player in their team or Jurgen just built a team stronger than the sum of its part. In my personal opinion, the only players who seem to come close in this Liverpool team are VVD and Alisson the rest are just functional at best.
Teejay, Lagos (A United fan that is not biased enough to think ManUnited have any world class player)

Erm…
Does anybody else feel like this season has been a huge mistake?

That was men against boys

…Didn’t Liverpool look suddenly a bit old and past their best?
Tim Sutton

Silver linings
At least the Watford result no longer annoys me and it looks they’ve had a good piss-up.
Aidan, Lfc (probably would’ve been better to stop drinking before today though)

A kick up the bum?
Well that’s broadly what happens when you let the players have two days off to celebrate the title win. We might have got away with that performance against some teams but not Man City.

In some respects I think Klopp got the team selection wrong. He might’ve been better off playing the players who had something to prove; Williams, Keita and Elliott all could’ve played and it might’ve had more purpose in the end.

There’s a chance that Klopp will use this as a reminder of what happens if the team takes their foot of the gas. It can serve as a good kick up the bum about what it takes the break records and win more trophies.
Minty, LFC

…Come on. Just admit it. You guys partied like there’s no tomorrow. Nothing else to play for. And, the team deserved that hiding. No need to say the team is focused. Everybody can see that too much beer in a week makes the best team just about average.

Hindsight: it would have been better to let our young players have their day against City. Get some feel of what other team can do.

Yeah, this means more! More soul searching needs to be done before next season. Set the priority right mentally. Or be doom for another 30 years.
Khairur (still couldn’t shed the jitter) Penang

Liverpool need sober cover
Called my dad last night at half time, furious with the way Liverpool had played. He very quickly pointed out that we were already champions and he’d actually missed the first 20 minutes because he was out fishing. Plus that Liverpool beat City already when it actually mattered.

With this knowledge in mind. I just sat back and watched the exhibition. Fair play to city, they were great. Liverpool disappointing. I hate seeing us lose. But let’s not pretend it mattered.

The only thing that I think we can reasonably take from this is the need to add depth in defence. Just in case Andy Robertson turns up obviously hammered again.
Marc

New record for Liverpool?
After all the talk of new records we might set, that has to be a new one nobody was talking about, right? Confirmed champions’ biggest defeat? Four-nil!? It’s funny, after the first half I just felt like City were being really clinical, but by the end it should have probably been eight or nine.

It was always going to be hard to raise our game to City’s level after the celebrations, but try not diving in at EVERYthing, Robertson, you lunatic! Hard to be down after such a great season, but the approach tonight has demonstrated what a massive ask it will be to retain the title next season and, by the same token, how well City did to win it second time round last year (seriously, who doesn’t win the league with 97 points???).
Mike, London

Klopp out!
It’s a disgrace. Twice as many games lost as last season. Totally unacceptable. He has to go.
Steve, LFC. London (via Bootle)

A rare Man City mail
Oh, I can’t wait for the LFC responses in Friday morning’s mailbox. I will say this from the outset. Whilst the win is great coupled with the fact that it ends Liverpool’s outrageous winning streak, it doesn’t change anything substantially for this season. Liverpool are still Champions and deservedly so as they absolutely smashed it.

Still, as Gav, Edinburgh highlighted yesterday, I’m enjoying it all the more after the (ahem) ‘usual suspects’ on here simply couldn’t stop themselves gloating about how ‘delicious’ the guard of honour would be and other mails like it. These mailers may wish to note that Guardiola has always spoken very highly of Klopp and of the Liverpool team of the past two seasons and, in point of fact, I can’t recall him saying a bad word about either. I think the closest he came to it was when the thousands of ‘fans’ gathered to smash up the City coach on the way into Anfield. Which was bad, but not as bad as the f*ckwits who came on here afterwards and tried to justify it. And I say this as someone who was present when West Ham ‘fans’ did the very same thing to the Man Utd coach in their (Wet Sham’s) first home game (against Utd) after Beckham got sent off in the WC.

Accordingly I was extremely pleased, but not in the slightest surprised, that Guardiola and his senior coaching staff made a point of joining the players in said guard of honour as I think it amply demonstrated the correct amount of respect due to both Klopp and this Liverpool squad. My point is that there are some LFC mailers on F365 that still don’t get what they’re doing that fuels the fire (“Loving the haters” etc) and I can recall only one LFC fan who wrote in to thank the many supporters who had written in to congratulate their (Liverpool’s) achievement. I appreciate that the mails get printed at the discretion of the MC and may not necessarily reflect how many were sent in thanking rivals but still, let’s see what Friday afternoon’s mailbox looks like shall we?

On another note, I used to think that following City would put me in an early grave and I cite the yo-yoing between leagues, the Gillingham play-off game, THAT PL title in the last possible moment and so on. There are many more! But, in the last ten years my experience seems to pale in comparison as to what it must feel like to be a Spurs supporter. Is there any other PL team that consistently gets SO close to victory without winning anything? I’m not having a dig as my team has never been to a CL final. But still, supporting Tottenham must surely have you permanently teetering on the brink of madness?
Mark (Reclines in chair, crosses one leg over the other whilst clamping pipe between teeth and taking two deeply satisfying drags. Aaaaahhh). MCFC