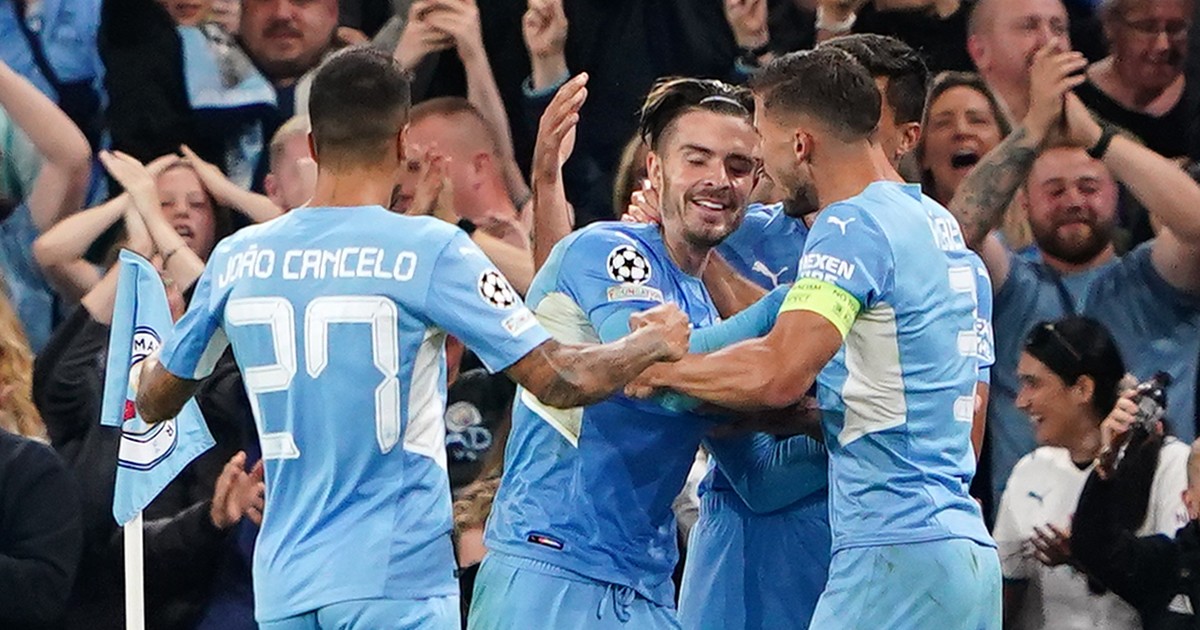 Manchester City are hoping to improve on last season’s Champions League final defeat to finally put an end to Pep Guardiola discussing whether them not winning the European Cup during his tenure would be a “failure”.

They went some way to emerging from their group relatively unscathed by putting Leipzig to the sword despite the impressive Nkunku’s treble.

Nathan Ake and Jack Grealish both scored their first goals in the competition to make it 1-0 and 4-2 respectively, with a Nordi Mukiele own goal and Riyad Mahrez’s penalty having given the hosts a healthy lead.

Nkunku brought the Bundesliga visitors to within a goal of Manchester City on three occasions but Guardiola’s side pulled clear when Joao Cancelo and Gabriel Jesus scored in the closing stages.

Leipzig, the 2020 semi-finalists, had threatened to be a tough test. In an attacking sense that proved the case but, defensively, City regularly cut the German team open.

City were without centre-backs John Stones and Aymeric Laporte but Ake went some way to justifying his selection by claiming the opening goal after 16 minutes.

The Dutchman went forward for a corner and met a Grealish cross with a firm header. Former Liverpool goalkeeper Peter Gulacsi managed to flick it onto the bar but the effort was too powerful and bounced over the line.

City immediately threatened more as Mahrez cut inside from the right and saw a trademark curling effort deflected wide. Grealish then had an effort blocked by Nkunku.

The hosts were gifted their second on 28 minutes. Kevin De Bruyne, making his first start of the season, found space on the right and whipped in a low, bouncing cross.

Mukiele looked to have it covered but he misread Gulacsi’s positioning and completely wrongfooted the keeper as he attempted to head back to him, resulting in an embarrassing own goal.

Leipzig, to their credit, continued to play positively and enjoyed a good spell.

Their reward came with a reply on 42 minutes as Emil Forsberg picked out Mukiele with a deep cross. Redeeming himself a little following his earlier error, Mukiele headed back across goal for Nkunku to turn past Ederson.

City responded instantly, although there was an element of controversy over their penalty after VAR adjudged Lukas Klostermann to have handled a Ferran Torres header at point-blank range.

Mahrez took full advantage as he fired into the roof of the net.

Leipzig again reduced the arrears six minutes into the second half. De Bruyne collided with the referee as the German side attacked but play continued and Nkunku headed his second from a Dani Olmo cross.

City responded again and Grealish made his mark as he raced onto a long ball from deep to cut inside from the left to curl a fine shot beyond Gulacsi.

The hosts thought they had another soon after when Torres glided around Gulacsi but his goal was ruled out for offside by VAR.

Leipzig were still not beaten, however, and Nkunku’s fine night continued as he got behind the defence and fired a low shot across Ederson to make it 4-3.

In keeping with the frenetic nature of the open contest, City added another one soon after.

This time Cancelo was the man on target as he lashed a shot into the roof of the net from 25 yards.

Cancelo was in the thick of the action again moments later, this time being felled by a wild challenge from Angelino. The Spaniard was shown his second yellow card and given his marching orders.

That killed any hopes Leipzig may have had of finding a way back into a remarkable game and Jesus wrapped up the scoring five minutes from time when he pounced on a loose ball in the area.