Home Arsenal Five players with a point to prove at Wembley 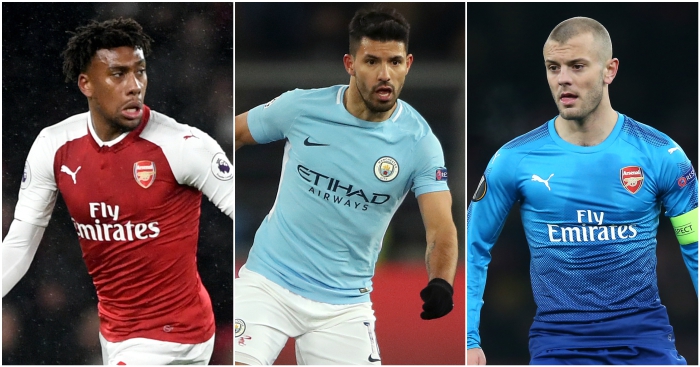 Sergio Aguero
Gabriel Jesus is coming. Pep Guardiola confirmed in his pre-match press conference on Friday that the Brazilian had been through three training sessions, and was nearing match fitness. Aguero will be only too aware that the competition for places is about to get fierce again.

Aguero could hardly have done more to convince his manager that he deserves to continue as City’s starting striker. In 2018, the Argentinian has started 11 matches and scored 14 goals. If there are still doubts about his ability to be the all-round forward that Guardiola so desires, they must be slightly alleviated by the outstanding goal record.

With Guardiola’s favourite closing in on a return, Sunday would be an opportune time to address that drought. Aguero’s goal in the 2010 Super Cup can only keep him sated for so long. (NB – this is a banter. I am aware that Aguero has plenty enough goals to keep him and us happy).

Petr Cech (and David Ospina)
“At the start it was clear that it was going to be like that,” said Cech on Wednesday, when asked if he or Ospina would start Sunday’s final. “I will be there with the team supporting but I don’t expect to play. It is always hard to watch any game from the bench or even from the stand if you are not selected. As a player, you always want to be involved.”

It is a very modern situation. In the past, a football club would have a first-choice goalkeeper and a reserve goalkeeper, and that hierarchy would rarely change. Now, with managers wanting to provide their first-choice with meaningful competition, those in reserve need to be sated for their afternoons sat on the bench with the promise of cup minutes.

It’s an understandable change, but still strikes as slightly bizarre. Arsene Wenger can spin the “we have two world class goalkeepers” yarn as often as he likes, but there is no doubt that Cech is a better player than Ospina. That has been proved over and over again. With Arsenal needing to lift silverware this season to alleviate the general mood of gloom surrounding the club, Wenger is taking a risk by picking Ospina.

Yet the disappointment in Cech’s words are pretty obvious. He presumably joined Arsenal from Chelsea in order to win trophies, has played almost every league game since and yet watched Ospina lift the FA Cup last season and get a chance to do so again at Wembley on Sunday. Any footballer who pretends that that doesn’t smart is a liar.

Bernardo Silva
It was perhaps merely a strategic move from Guardiola. Bernardo Silva has been branded as a waste of money given his lack of league action this season, but the truth is that Raheem Sterling and Leroy Sane have performed better than anybody expected. With Sterling in particular adept at coming off his wing and finding space in the penalty area, Silva simply hasn’t been needed. If it ain’t broke, don’t fix it.

Yet Guardiola was not prepared to accept criticism of Silva. “When he played he’s played top,” said Guardiola. “He’s a young guy, he’s a guy in the locker room who we are so happy to have here. He’ll stay a long time, while I’m here he will not move on, he will stay with me.

That type of personality trait, a gratitude for the minutes he does play rather than gripes about those he doesn’t, is rare in an elite footballer, and also precious. It’s a principle that becomes more emphatic with every passing season, but success is based more on the strength of the squad than the first XI. Guardiola adores the work ethic.

Silva’s reward should be a starting role in a Wembley final. Having scored one and assisted three more in this competition, the EFL Cup has become the perfect environment to show Guardiola that he not just a reliable substitute. At 23, his time will come.

Jack Wilshere
Of all the players at Arsenal that Roy Keane was going to have a pop at, you didn’t think it would be Wilshere. Keane is a man whose barometer is now firmly set to ‘angry man in pub who the barmaid is refusing to serve’, but his ire is typically reserved for those players who he would probably colloquially refer to as “fannies”. That wouldn’t initially seem to cover Wilshere, but would cover at least five of his teammates.

Still, it’s better not to second guess Keane’s opprobrium. “The manager summed it up,” he said after the defeat to Ostersund after marking out his customary long run-up. “No energy, no desire, you’re looking for your senior players to lead by example. I always think, when Wilshere’s your captain, to me, probably the most overrated player on the planet.”

Even understanding Keane’s position as a Big Opinion For Hire, that’s pretty harsh. Wilshere has been decimated by a series of significant injuries, and has been Arsenal’s second best player (after Mesut Ozil) since his return to the team. It will be no surprise to see him back in the next England squad.

Wenger was moved to defend Wilshere on Friday, but in that sense he has allowed Keane to win. Far more meaningful than a verbal defence would be a practical from Wilshere himself. He will be asked to help keep Kevin de Bruyne quiet while simultaneously starting Arsenal’s own lightning counter attacks. Anyone who does both successfully cannot be rated highly enough.

Alex Iwobi
I’ll level with you. I’d written a lovely paragraph about how Henrikh Mkhitaryan is the man of cup finals, having played in one Armenian cup final, two Armenia Super Cup finals, four Ukrainian cup finals, two Ukrainian Super Cup finals, one German Super Cup, three DFB-Pokal finals, a League Cup final and a Europa League final in just 446 club appearances. And then I realised that Mkhitaryan is cup-tied. Which all means that Iwobi is likely to get another last chance to impress Wenger in the forlorn hope of keeping his place in a team that is looking to forge a new-look attack.

It’s an impossible balance to get right. We must be patient with young players, allowing them to both stumble and recover without piling criticism upon them, both of which can be equally suffocating. Yet we also have to be realistic. It would be a leap to say that Iwobi has progressed this season. Too often the final ball is poor. Too often the blind alley is ventured down.

Having played Iwobi for all 90 minutes in defeat to Ostersund on Thursday, perhaps Wenger has an alternative tactical plan for Sunday. If Ramsey is fit he could play with an extra defensive midfielder and go with a 4-3-3, or give Danny Welbeck another chance to impress. But if Iwobi does start, he has to make inroads against the best right-back in the country.

Not many 21-year-olds are afforded 27 matches for an elite club between August and February. The time has come for Iwobi to justify the faith.