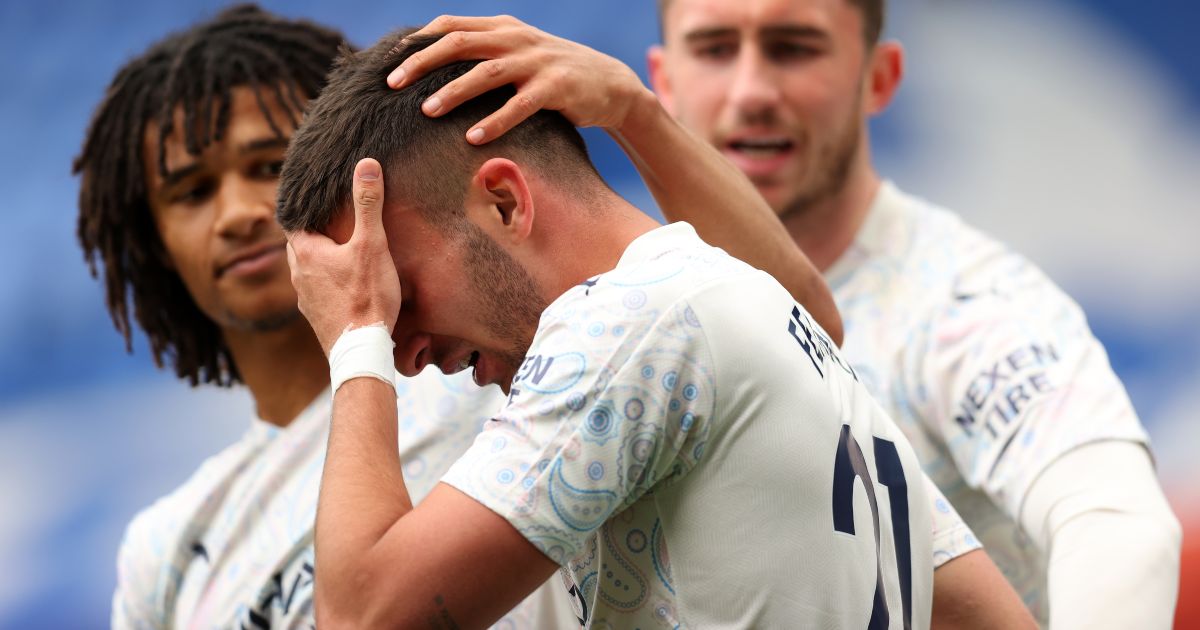 It’s easy to lazily think that Ferran Torres has had an underwhelming debut season for Manchester City until you check the numbers and realise he has now scored ten goals. That’s more than Anthony Martial, more than Mason Mount, more than Roberto Firmino this season. Perhaps it’s not been such an underwhelming season after all.

The Spaniard looked incredibly emotional to score the second goal against Crystal Palace for a much-changed City side in front of no fans, just as Pep Guardiola seemed almost sarcastically ecstatic to see him score. There was no sense that this was a reserve City side going through the motions, even though it took 57 minutes for City to muster a shot on target. They were stuttering – eight changes will do that to a team – but they were not complacent.

With that strike, Torres became the sixth City player to reach double figures in all competitions this season, with Kevin De Bruyne on nine goals and likely to make that a magnificent seven by the end of the season. In contrast, Manchester United have four such prolific scorers while Chelsea and Liverpool can only muster three. It’s a simplistic comparison but it perfectly illustrates the ridiculous depth which makes a Premier League/Champions League double (to add to the usual League Cup) this season’s likeliest scenario.

Sergio Aguero will claim the headlines – just as he claimed Glenn Hoddle’s sentimental Man of the Match award – but it is the impressive Torres who is the future of City, along with the rested Phil Foden. Whether Raheem Sterling and Gabriel Jesus will join them in that future is up for debate, with the former being seriously linked with an exit for the first time in his City career; he did nothing to advance his cause at Selhurst Park and was the least effective of the attacking quartet brought in to rest weary legs.

Perhaps Guardiola’s enthusiastic celebration was largely because he knew he could now save his cavalry for Tuesday, but it was also clearly driven by gratitude for the performances of players on the periphery of his first team. To a man, City were motivated, despite the reality that even a hat-trick was unlikely to change the manager’s mind about the second-leg line-up for PSG. Nobody in this City squad appears irked by their status; Guardiola knew he was taking no real risks even with only two of his first-choice outfield players in the line-up.

This is a Premier League title victory built on the efforts of 20 first-team players and if you think that money makes that situation easy to manage while competing on four fronts then you are a fool. Money makes success more likely but it does not come with guarantees; nobody since Sir Alex Ferguson has come close to winning three titles in four seasons.

That level of success might need a Kevin De Bruyne but it also needs a Torres, who has gone about his business largely unheralded this season but has now scored two goals in recent weeks to feel like a key cog in this incredible, winning machine. At 21 and just £20m, that should never be described as underwhelming.