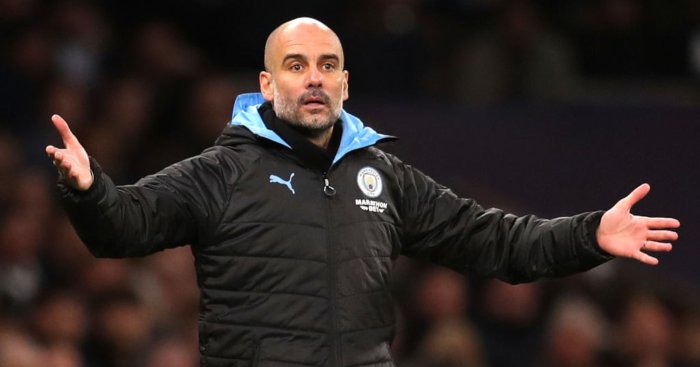 Manchester City boss Pep Guardiola says he could be sacked if his side lose their last-16 clash against Real Madrid.

Second-placed City are currently 22 points off the pace in the Premier League with rivals Liverpool storming the league having only dropped two points all campaign.

Guardiola‘s men still have a chance to win the FA Cup, League Cup – where they will face Aston Villa in the final – and the Champions League.

OPINION: Trailing this Liverpool side makes nobody a fraud…

And Guardiola suggested that he could get the boot if they lose their Champions League tie against Real Madrid.

“That’s why it is so difficult to win it. And in 100 and more seasons of history for Manchester City, it was 100 seasons of failure – that is not true,” Guardiola told Football Daily.

“There are many incredible players that made our fans happy, and (times when) our fans enjoyed part of the season. I know the people say ‘You are good’ or ‘You’re not good enough.’

“I accept it. I want to win the Champions League, I dream and will enjoy the games against Real Madrid, to see what I can do.

“And this process, the two weeks before, will be the happiest moments of my profession, to imagine what we can do to beat them.

“If we don’t beat them, then the chairman will come, or the sporting director, and say ‘It’s not good enough, we want the Champions League, I’m going to sack you’.