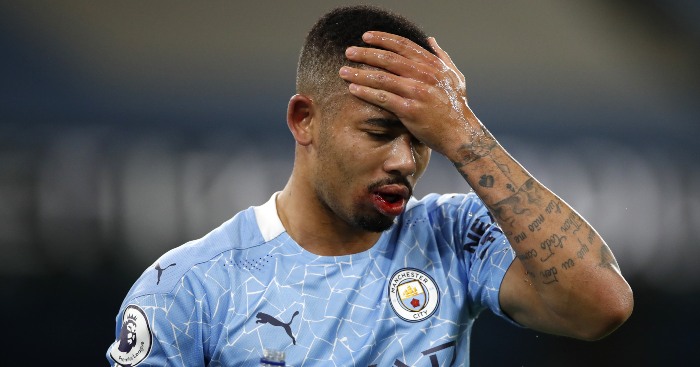 Manchester City exist in a curious space where it is easy to find criticism of the volume of their spending (and its implications, considering the origin of their money) but criticism of their spending choices is rare. That’s because such criticism is generally peddled for disgruntled fans and there just aren’t enough disgruntled fans of a club that lags far behind Manchester United, Liverpool, Arsenal and Chelsea in sheer supporter numbers and even further behind when it comes to supporters with a sense of entitlement. Which is why City’s negligent decision to spend nothing on strikers in four years has largely gone undetailed.

Imagine for a second if any of the four clubs mentioned above were merrily allowing their increasingly fragile 32-year-old striker’s contract to run down into its final year, with only one other out-and-out striker – long since proven to be below the required goalscoring standard – in the first-team picture. There would be pundit outrage, fan outrage, journalist outrage. There would be questions asked on a weekly basis of the management. But this is City so almost nothing is said about £650m being spent in four years with not a penny being spent on strikers.

This is surely the biggest Premier League transfer negligence of our times. Having no real succession plan for one of the greatest strikers to grace these shores is plain bizarre. If Pep Guardiola once thought Gabriel Jesus was the answer then surely he no longer believes in that fairytale; he is a serial spurner of big chances in a side creating fewer and fewer of those big chances. He is an excellent back-up option and undoubtedly a valuable team player but he is not City’s future if City intend on challenging for titles in this decade as well as the last.

Even this infuriatingly slow and ponderous City side has created more chances from open play than any other Premier League side this season, and only Liverpool have created more Opta-defined Big Chances. But nobody has come close to missing as many as City, whose 30% conversion rate of those chances (‘a situation where a player should reasonably be expected to score’) is dismal. Even Arsenal are better and Arsenal are rotten.

Jesus has been predictably wasteful. Raheem Sterling has been wasteful and we’re no longer certain if that is still predictable. That pair have scored a total of five goals from 37 shots this season. Meanwhile, Tottenham’s Harry Kane and Son Heung-min have scored 19 goals from 68 attempts. No maths wizard is required to conclude that City have a finishing problem.

A quick glance at an xG table tells us that City are the only Premier League team in the top 13 of the table to underscore this season. And they are underscoring by some distance. This is a team that creates more quality chances than Tottenham and yet is scoring at the same rate as Crystal Palace. It’s not that finishing is City’s only problem – they are missing David Silva’s feet in small spaces and the pace of their play is excruciating – but it’s the problem that would have been the easiest to solve with their deep pockets. It’s a facile point but with Kane even in this flawed City side, they would be top of the Premier League this season.

Which makes City’s transfer inactivity all the more puzzling. That they left it a year too late to buy centre-halves was particularly poor – and probably cost them a title challenge last season – but that pales in significance when compared with the prospect of their striker swerve soon ticking past the four-year mark.