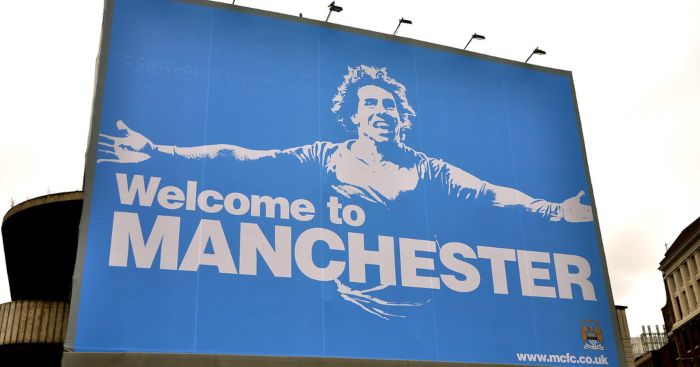 18 – Patrick Roberts (£12m, from Fulham in 2015)
Norwich’s “perfect fit” has still made just one Premier League appearance in four years at Manchester City: as a late substitute for Sergio Aguero in a 4-1 defeat at Tottenham in September 2015.

19 – Gabriel Jesus (£27m rising to £31m, from Palmeiras in 2017)
As his difficulty in dislodging Sergio Aguero becomes more obvious by the game, it is easy to forget that Gabriel Jesus was both so young and so expensive when he signed two-and-a-half years ago.

20 – Raheem Sterling (£44m rising to £49m, from Liverpool in 2015)
His reign as the most expensive English footballer ever is over, but it will take something drastic to remove the title of Manchester City’s costliest 20-year-old from Raheem Sterling.

21 – Jo (£19m, from CKSA Moscow in 2008)
He replaced Nicolas Anelka as Manchester City’s last pre-Sheikh Mansour club-record signing, and Vedran Corluka as their most expensive 21-year-old. Poor fella had a cotton eye, too.

22 – John Stones (£47.5m rising to £50m, from Everton in 2016)
Apropos of nothing, Vincent Kompany was also 22 when he joined. John Stones always had hella big shoes to fill even before his recent struggles.

23 – Amyeric Laporte (£57m, from Athletic Bilbao in 2018)
The most expensive uncapped footballer in history is Manchester City’s most expensive 23-year-old. Aymeric Laporte has two Premier League winner’s medals in a season and a half.

24 – Kevin De Bruyne (£55m, from Wolfsburg in 2015)
“The world is going mad. The amount of money they’re paying for this boy is just absolutely bonkers! He’s a good player, but is he a great player?” Yes, Phil Thompson. Yes he is.

26 – Wilfried Bony (£25m rising to £28m, from Swansea in 2015)
Suffice to say, that ‘rising to £28m’ is pretty superfluous. Wilfried Bony scored ten goals in 46 games in what might be one of the most underrated wastes of Manchester City money there has ever been.

27 – Riyad Mahrez (£60m, from Leicester in 2018)
It did not go precisely to plan, but Riyad Mahrez’s first Manchester City season did involve three trophies, 44 games, 12 goals, 12 assists, crucial match-winning performances against Tottenham, Watford and Bournemouth, and those heroics on the final day against Brighton.

28 – Fernandinho (£30m, from Shakhtar Donetsk in 2013)
Is there a greater affirmation of a central midfielder’s ability than praise from Graeme Souness?

31 – Eyal Berkovic (£1.5m, from Celtic in 2001)
Not too many players can boast a career record of three wins, three draws and three defeats in nine games against Manchester United. Eyal Berkovic’s two derbies ended in a 3-1 victory and 1-1 stalemate in 2002/03.

32 – Shay Given (£6m rising to £8m, from Newcastle in 2009)
Was he nonchalantly eating a roast dinner when he signed the contract?