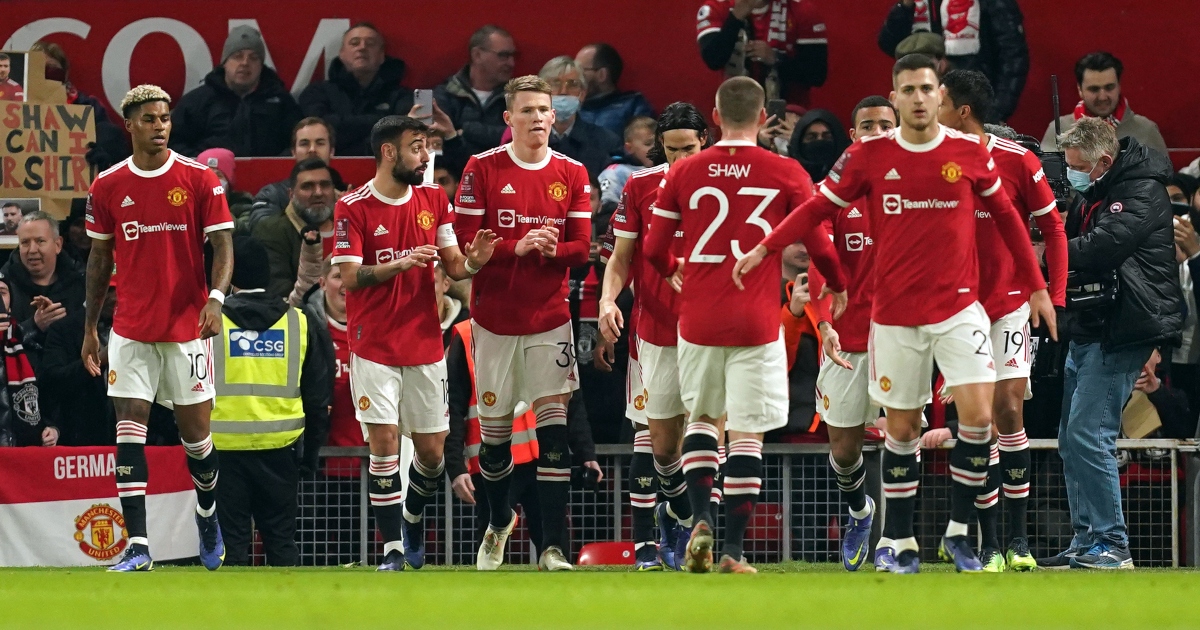 Scott McTominay’s early header was enough to see Manchester United defeat Aston Villa in the third round of the FA Cup.

After a weekend of intrigue and upsets, the third round ended with an all-Premier League encounter and one of Liverpool’s greatest-ever players managing at Old Trafford for the first time.

Monday’s tie lacked goals but provided plenty of entertainment, with McTominay’s header the difference as Ralf Rangnick’s United secured a hard-fought 1-0 win to set up a fourth-round date at home to Middlesbrough.

Rangnick and ‘one of football’s great misnomers’ revealed

Villa already had an Old Trafford win under their belt this season and will leave ruing what could have been given the number of chances they created after falling behind in the eighth minute.

Ollie Watkins cannoned an effort off the crossbar in the first half and, while United had chances to extend their lead, the visitors looked as unruffled as their constantly goaded manager.

Danny Ings saw an equaliser ruled out after a lengthy video assistant referee review, with Jacob Ramsey’s block on Edinson Cavani the apparent reason, before Watkins saw a leveller chalked off for offside.

United looked there for the taking but Gerrard’s side could not eke out an equaliser in a tie that adds spice to Saturday evening’s Premier League meeting between the clubs at Villa Park.

Into the fourth round of the #FACup! 🔴#MUFC

Gerrard was jeered on his way out for the match and stared at the pocket of United fans that were chanting loudest about him.

That section held up a large banner as kick-off approach that read ‘Standards’ alongside images of club greats – a poignant message given the recent issues that were obvious in last Monday’s 1-0 home loss to Wolves.

The Red Devils showed a much-needed reaction in the early stages and just eight minutes were on the clock when Fred swung in a cross from the right that McTominay glanced home.

Rangnick was elated on the touchline but soon saw his side lack the control he craves.

Tyrone Mings met a corner with a flicked header to the far post, where Watkins would have converted was it not for a crucial Victor Lindelof touch.

Emiliano Buendia showed skill and strength to wriggle through the heart of the United side and drag across the face of goal, before John McGinn forced David De Gea into an excellent one-handed stop.

Villa’s strong response continued as Buendia had a shot and, after Emiliano Martinez denied Cavani on the break, came even closer to levelling.

A poor, heavy touch by returning Lindelof was raced onto by Watkins, who cut in and rattled the crossbar from six yards out.

A low Ramsey strike deflected narrowly wide off McTominay as Villa looked dangerous, only for a break in play to change the rhythm as half-time approached.

The visitors returned from the break strongly and were celebrating what they thought was an equaliser just five minutes into the second half.

Ezri Konsa headed a free-kick back across the face of goal for Ings to bundle home, but after a VAR review for offside, which included Michael Oliver checking the monitor, Villa saw it disallowed.

But the decision appeared to be for Ramsey blocking Cavani in the build-up rather than offside for a Watkins touch before Ings turned in.

Whatever the reason, tension had grown and Villa soon cursed another ruled out goal, although Ings was clearly offside before racing through and clipping over De Gea for Watkins to score.

Cash saw a thumping drive from the edge of the box denied by De Gea, who berated his defence when Watkins was afforded time to bend just wide.

Donny Van De Beek replaced Cavani as United desperately looked to gain some control in the final 20 minutes, with fans making their frustration known when Greenwood shot as Rashford waited.

Villa pushed to take the match into extra time but could not find the goal they craved.