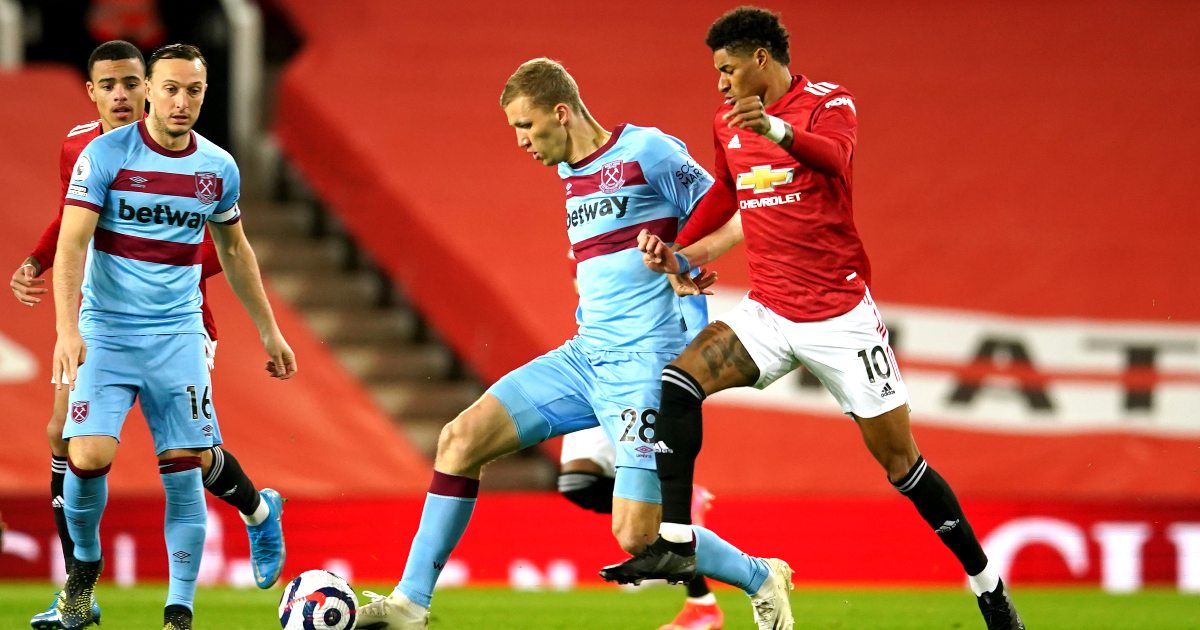 With the Europa League trip to AC Milan and FA Cup quarter-final at Leicester coming up before the international break, Ole Gunnar Solskjaer’s side kicked off an important week with a solid performance on Sunday.

Mason Greenwood twice struck the post on a night when Dawson’s own goal proved the difference.

David Moyes’ men were set up to frustrate a month on from their extra-time FA Cup loss at Old Trafford and failed to muster a shot in the first half – the first Premier League side to manage that since March 2018.

But the Hammers also gave little away in the opening period, with Lukasz Fabianski superbly tipping a low Greenwood shot onto the post when frustrated United had their best chance.

But Solskjaer’s side finally found a way through eight minutes after the break when Bruno Fernandes’ corner was touched on by Scott McTominay and the unsighted Dawson turned into his own net.

West Ham attacked with more purpose after falling behind but Moyes’ wait for a first win away at Old Trafford continues, with Fernandes superbly denied before Greenwood thumped the post as United looked to settle any nerves.

The visitors had started positively but failed to launch a serious first-half attack, with Michail Antonio left ploughing a lonely furrow up top.

Moyes’ men are a threat from crosses and Dean Henderson – again deputising for David De Gea – made no mistake when clearing a deflected Aaron Cresswell ball from the left, leaving Jarrod Bowen needing treatment.

Harry Maguire let his team-mates know in no uncertain terms that they needed to “tidy up” and stop giving the ball away during that expletive-filled break in play that was followed by the hosts’ best chance to that point.

Quick build-up after winning the ball ended with Greenwood cutting onto his left and floating a cross to the far post, where Marcus Rashford – a surprise starter after an ankle issue – failed to get clean contact.

Fabianski just about gathered a dangerous cross from Greenwood soon after but West Ham were defending well on the whole, throwing themselves in the way of shots and clearing balls into the box.

But the visitors had their goalkeeper to thank for keeping things level at the break as United attacked at pace and Greenwood hit a low, left-footed shot that Fabianski superbly tipped onto the post in the 37th minute.

Rashford got away a tame header from a clipped Fernandes pass that the West Ham goalkeeper stopped simply before the break, from which the hosts returned strongly.

Vladimir Coufal did well to prod behind a Greenwood cross that Rashford was ready to tap home at the far post, but the resulting corner proved costly.

Fernandes swung in the set-piece from the left and Dawson directed into his own net under pressure from Maguire in the 53rd minute.

The goal opened play up. The video assistant referee ruled Maguire had not fouled Tomas Soucek in the box after a review, with the giant Czech midfielder towering over the United defender and heading wide soon after.

Fernandes forced Fabianski into a fine one-handed stop down to his right in between those moments, with Moyes turning to Said Benrahma and Manuel Lanzini in a bid to inject new attacking impetus.

Play was swinging from end to end as both sides pushed, with Maguire stretching to cut out a Coufal cross before Issa Diop inexplicably welcomed on Greenwood and saw the teenager rattle the post in the 77th minute.

Shaw threw himself in front of a Soucek attempt as United held out for a fourth successive league clean sheet for the first time under Solskjaer.