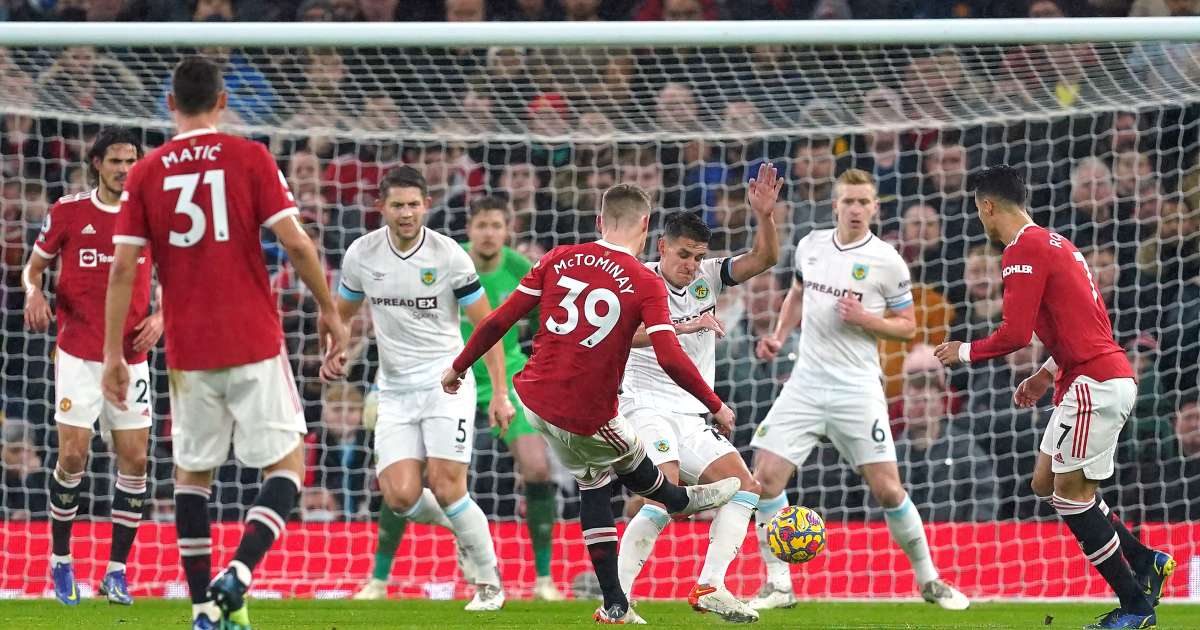 Scott McTominay starred as Manchester United ended 2021 with a much-needed win against a depleted Burnley.

Having gone top of the Premier League with victory at Turf Moor in January, talk of a title challenge had turned to the need to kickstart their Champions League qualification push by the end of a topsy-turvy year.

There remains plenty of work for Ralf Rangnick to do, but Thursday’s 3-1 win against an under-strength Burnley continued the unbeaten start to his interim stint and sent the side up to sixth heading into the new year.

United would have ended the calendar year outside the top six for the first time since 1989/90 had they not won at Old Trafford, but academy graduate McTominay seemed hell bent on getting them back to winning ways.

The Scotland international delighted compatriot Sir Alex Ferguson on the eve of his 80th birthday by scoring a fine opener from the edge of the box in the eighth minute.

A low Jadon Sancho shot deflected in off Burnley captain Ben Mee and Cristiano Ronaldo made it three, turning home after McTominay’s strike was superbly tipped on to a post by Wayne Hennessey.

The back-up goalkeeper impressed, with Nick Pope among several positive Covid-19 cases in the Burnley camp, as did Aaron Lennon as he capped a fine display with a quality effort before half-time.

A lively first half made way for a flat second period as United professionally saw out victory – a welcome end to a challenging year at Old Trafford.

Rangnick made six changes for the match and Burnley unsettled the hosts early on, with Chris Wood heading off target before curling wide unaware offside would be called.

It was an energetic start to an entertaining opening period, with Ronaldo uncharacteristically finding the Stretford End rather than the top corner when put in by the returning Luke Shaw.

United would not be cursing that missed opportunity for long. Mason Greenwood cut the ball back to the edge of the box and Ronaldo’s touch when fell kindly for McTominay to hit a low drive beyond Hennessey.

A period of relative calm followed before Shaw showed a moment of quality that has been lacking in his performances this season. The England left-back drove up the field from his own half and sent a fierce drive just wide.

Sean Dyche’s side were managing to unsettle their hosts, but United extended their lead in the 27th minute.

More good work by Shaw eventually ended with Sancho being sent down the left, with the summer signing cutting in and hitting a snapshot that went in off Burnley skipper Mee.

United continued to press for another that arrived in the 35th minute.

A superb McTominay effort was met by a similarly impressive stop by Hennessey, who tipped the strike on to a post, only for the Portuguese to flick the loose ball into an empty net.

But United’s impressive first half ended in a glimmer of hope for the visitors.

Lennon was proving a handful and he cut out a heavy Eric Bailly touch before showing quick feet and impressive composure to send a low strike beyond De Gea in the 38th minute.

Greenwood forced a smart reaction save from Hennessey on his Premier League debut for Burnley early in the second half, with the Wales international producing another fine stop when in-form McTominay took aim from 25 yards.

Bailly limped off and headed straight to the dressing room in the 66th minute as Rangnick turned to Raphael Varane – the kind of strength in depth Burnley could only dream of.

But the Clarets continued to dig deep and Mee headed over before Hennessey produced another fine save to thwart Edinson Cavani unaware he had strayed offside.

Ronaldo hit the wall with a free-kick and struck the side netting, with Shaw lashing off target as the match wound down, United enjoying a relatively comfortable win for a change.