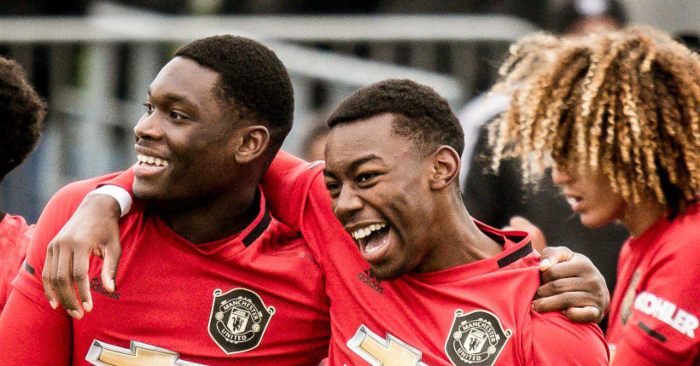 In March the UK went into lockdown and football was stopped. The coronavirus pandemic had spent the early months of 2020 crawling its way around the world, and as terraces fell silent, there was a very real fear that the country could be overrun by the virus.

Months on, we have all lived the same collective trauma of not being able to see loved ones, and of roll calls of the dead being announced on the nightly news. Through most of this, our lifeblood – football – has not been there to comfort us.

To find out what effect coronavirus was having on young footballers who are still years away from making their debuts, I spoke to Nick Cox, Head of Academy at Manchester United.

“We don’t know what the ripple effect of coronavirus in academy football will be,” he told me. “At the moment it’s crisis management, not trying to guess what will happen in the long term.

“There is a greater level of mental health and wellbeing support for young people at football clubs than there is in any other sport, and I suspect most schools. Obviously, all this depends on what club you’re at, and I acknowledge that at Manchester United we have more resources than most.”

As a category one academy, Manchester United provide first-class coaches who act as the first line of mental health first aid. Beyond that, they have a head of education; player care and wellbeing staff; sports psychologists, and doctors, all available to their academy players.

However, they have had their stability pulled out from under them during the most uncertain time in football’s living memory. If young players are not supported, the consequences could be dire.

“We educate some of our players full time, and those we don’t, we still see four or five times a week,” said Cox. “For us to just lose contact with them because we can’t be in the same building as them would be catastrophic. We have a duty to support our players, and their families, through this challenging time.”

I wondered, learning that the Manchester United academy educate players in the classroom as well as on the pitch, what their approach has been to long-distance learning.

“Some clubs are focusing on the football, keeping their skills developing and their fitness sharp. But we’ve taken the opposite approach.

“Their football development is important, but we can deal with that when they’re back on the training ground with us. For us, it’s about staying connected, being a support, and managing their wellbeing and mental health at this point.”

As an academy coach myself, my colleagues and I have experienced the challenges of trying to maintain positive contact with our players during lockdown. This has included recording skills sessions on the local park and sharing the videos via WhatsApp, organising quizzes, and much more. But we’re coaching in the Scottish Lowland League, and we’re all volunteers. The footballing stakes are much lower, even if the personal stakes are just as high. That’s why I wanted to know what Cox and his team have been doing to keep their players engaged during this time.

“We want to keep them active, but that includes their mind as well as their feet,” he said. “We’ve been looking at how we connect with over 200 young people on a regular basis without being stifling. We want to inspire and motivate them, and that’s hard. The one bit of their learning that connects them all, that the all love, their football – that’s gone for now.

“What’s coming to the forefront throughout this pandemic is that our young people are developing incredibly positive attitudes to their life outside of football. They’re reporting back to us on how they’re getting better at cooking, how they’ve taken on family caring responsibilities, and much more.”

Manchester is a diverse part of the UK, with extraordinary riches huddled against areas of high deprivation. As such, the talent that fills the Manchester United academy comes from a diverse range of backgrounds.

Historically working-class areas like Huyton, near Liverpool, which bred the likes of Peter Reid – and Oldham, near Manchester, where David Platt hails from – have been hotbeds of footballing talent. But with the nation instructed to stay home, I wondered whether lockdown would disadvantage academy players who may not have access to garden space at home.

“Some of the young people come from homes where they have gardens, freedoms, and resources to help with their education,” Nick says. “But others, their parents are key workers, or their parents have lost their jobs, they’ve no garden, no outlet for themselves. We didn’t want to be driven by a homework style set of activities, that’s why we’ve brought in challenges like poetry writing and writing letters to key workers to thank them for their work during the pandemic.

“These activities have allowed the young people to demonstrate their creative skills, to lead their own learning, and it’s something that any of them can do regardless of access to a football pitch.

“On top of all this, the young people are also facing the very real fear that someone they love will get ill.”

It’s easy to forget, that behind the mega-structure that is a Premier League football academy, are youngsters, with fears, who – despite living through a national collective trauma – are still fighting on to give themselves a future that many of us can only dream of.

“This time away from the players has really reminded the staff at the academy that we are working with over 200 unique and brilliant individuals who have so much to offer besides their skills on the pitch.

“We didn’t want to be too regimented with the activities we are giving young people. All of their parents will be home schooling for the first time, and we wanted to care for their wellbeing also – so we didn’t want to overload them.”

Speaking to Cox it is clear that he and the club are investing in their youth team players as valued individuals, not future commodities. This approach is wise as it has proved fruitful before: in December 2019, Manchester United reached their 4,000th game in a row with a former member of their academy in the squad.

In fact, this commitment to youth is something so engrained in the club that previous academy graduates are taking time out of their lockdown to mentor those who are working hard for the chance to one day replace them in the first team.

“As well as our coaches’ regular catch-ups on the phone or on a video call, we’ve also run online Q&A sessions with Marcus Rashford, Scott McTominay, Ole Gunnar Solskjaer, and others. The whole club is really taking responsibility for helping our young people during this time.”

From a mental health perspective, Cox and his team seem to have a firm grasp on how they can best support players’ development. But there is so much more at play than education and learning for those who thought 2020 could be the year they began their top-flight career.

Cox explained to me why he felt positive for the older players in the academy who were reaching the end of their time there. He said coronavirus could eventually have a positive impact on their careers: “There will be short term missed opportunities because at the end of the season, youngsters usually get a shot at stepping up.

“I feel confident we will recover from that though. I don’t have concerns here at Manchester United, because we’ve got a good record of promoting youngsters.

“I do worry for others, though. There’ll be groups of boys who are out of contract across the country and not able to take part in trials for other clubs. That’s why we’ve taken the decision to keep every youngster on until this is all over.”

Nick believes that for some young players, the impact of coronavirus may well push them out of football altogether. Surprisingly though, he also makes the same prediction for older players in the lower leagues.

“For those released though, it may be the end of their career. However, what may happen is that clubs in the lower leagues, who are working to smaller budgets, will start to recruit more and more young English players because they’re cheaper. I could see the average age of lower league clubs reduce dramatically.”

Nothing in life is certain, but we know coronavirus is inflicting huge stresses on players in football academies. The loss of some young talent now seems inevitable but having spoken to Cox, I do feel more optimistic that some of their dreams will still come true.

Dominic Stevenson is an author and football writer. His first book, Get Your Head In The Game, examines the intersection between football and mental health and is published in the UK and US in December 2020 with Watkins Publishing. Buy it here.