Who wants to read a combined best XI when you can argue about who is the worst? This way please... 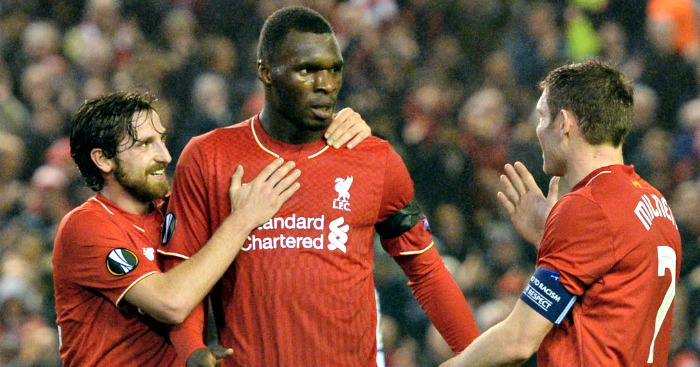 Bored of reading who makes up a combined Manchester United and Liverpool XI? Of course you are. So how about the worst combined XI of players who have started Premier League games this season. We’re no Garth Crooks so this is a genuine 4-2-3-1 with players playing in actual positions in which they have played this season…

GOALKEEPER: Adam Bogdan (Liverpool)
‘An awful Liverpool league debut for Bogdan’ said Liverpool fans’ site This Is Anfield. As for the Liverpool Echo, they wrote: ‘His big day turned sour quickly when dropping howler to allow Ake to score. Could have done better for the second, as well, and nearly conceded a third with some bizarre decision-making.’ The game? The 3-0 defeat to Watford in December. A month later Jurgen Klopp had recalled Danny Ward and Bogdan is now third-choice goalkeeper. Except in this team.

RIGHT-BACK: Paddy McNair (Manchester United)
Simply not of the required standard. At right-back or centre-half. Or as a striker, which is what Louis van Gaal accused him of thinking he was when his lack of positional awareness almost allowed Leicester a winner in November. Has started at right-back this season but is now behind Guillermo Varela in the pecking order in that position, and seemingly behind 18-year-old Timothy Fosu-Mensah at centre-half. He has just been described as “a sh*t Jonny Evans” by the only Manchester United fan in the office. That’ll do.

CENTRE-HALF: Emre Can (Liverpool)
The polite way to describe Can’s performance against Aston Villa as part of a three-man defence in September would be ‘erratic’. The less polite way would incolve the words ‘car’ and ‘crash’. Despite shipping two goals to one of the worst teams in Premier League history, Brendan Rodgers stuck with the plan and the German was at fault for Romelu Lukaku’s equaliser in the 1-1 Merseyside derby draw that led to his sacking. Bizarrely, he has not played at centre-half since. It’s almost like he is a midfielder.

CENTRE-HALF: Phil Jones (Manchester United)
Astonishingly, Jones has played only one more Premier League minute this season than Cameron Borthwick-Jackson; he is basically made of paper and gurns. He last played 90 minutes in the Premier League on Boxing Day in a 2-0 defeat to Stoke. The player ratings in the Manchester Evening News note an ‘awful first 45 minutes’ from Jones, who was dropped for United’s next game. Will he still be a Manchester United ‘player’ next season?

LEFT-BACK: Alberto Moreno (Liverpool)
We will leave this one to Jamie Carragher: “The left-back has to come out of the team. (Jon) Flanagan has come back fit and has to go into the team, he (Klopp) has to change the left-back. Flanagan played left-back when they nearly won the league. He can’t be worse than him.”

CENTRAL MIDFIELD: Joe Allen (Liverpool)
“For me, Joe Allen was always a first-team player,” said Jurgen Klopp in January. Well he has a very odd way of showing it. The Welshman has completed only one Premier League game this season – a 2-0 defeat to Newcastle in which fan website This Is Anfield claim he ‘allowed the midfield battle to pass him by’. And when you’re allowing a midfield battle featuring Vurnon Anita to pass you by, you know you’re in trouble.

RIGHT MIDFIELD: Jordon Ibe (Liverpool)
A red-faced Daniel Storey almost walked out of the Football365 offices in protest at the decision to include Ibe in this line-up ahead of Jesse Lingard. “But, but, he’s only 20,” he spluttered, misunderstanding the concept of this feature entirely. Whether 20 or 25, Ibe has been one of Liverpool’s poorest performers this season, with no goals in eight Premier League starts. Lingard – though patently not really much, if any, better – has scored four goals. Ultimately useless but temporarily useful.

ATTACKING MIDFIELD: Wayne Rooney (Manchester United)
We would usually hesitate to quote Paul Ince but on this subject he was absolutely correct when he said earlier this season: “Rooney always wants to be involved and if he’s playing as a No 10, he wants to get on the ball so he’s dropping deeper and deeper and deeper. There have been times where he’s been dropping into his own back four to pick up the ball.” Simply speaking, if he’s scoring goals, play him as a striker. If not, don’t crowbar him into another position where he slows down a team already almost stationary.

LEFT MIDFIELD: Memphis Depay (Manchester United)
Remember when he was brilliant against Club Brugge and we had a mailbox declaring he was the new Ronaldo? He was also excellent (at home) against Midtjylland. It’s just a shame he has been largely bobbins in the Premier League. Despite starting more games than Lingard, Memphis has scored just twice (against Sunderland and Watford) and has claimed not a single assist. Not even by accident. In fact, he has created a chance once every two hours of Premier League football this season. Does anybody want to argue that Adam Lallana has been worse?

STRIKER: Christian Benteke (Liverpool)
‘Liverpool would be in relegation battle without Christian Benteke’s goals this season’ is the headline on the Metro website and they do almost have a point; he does have a habit of scoring winners. But £32.5m Benteke is fourth-choice striker at Liverpool for a reason – because he does not have the attributes that Klopp requires in a striker. But my word he will be brilliant for Atletico Madrid next season.