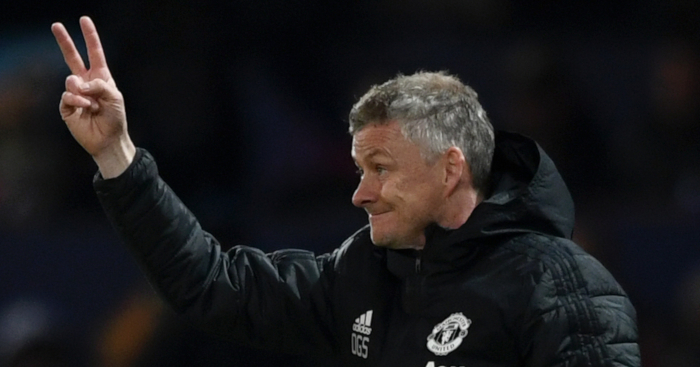 Crisis leader
Barcelona beat Manchester United at Old Trafford on Wednesday in a fairly one-sided Champions League quarter-final first leg. The hosts did not have a shot on target and looked to generally contain Barca, who themselves only had three attempts on target. It was a deserved defeat, but neither substantial nor terminal to their hopes of qualifying.

The result also continued a run of poor form, with United losing four of their last five games. But they had lost just one of their previous 17, are still four points behind third place in the Premier League, and are just one goal down in a Champions League quarter-final. All is far from lost.

Does that suffice for The Sun‘s chief football hyperbolist Neil Ashton? Of course not.

He writes that ‘the excuses will come thick and fast,’ that Barcelona ‘are saving themselves for bigger challenges to come,’ that this was ‘not the United way,’ that United ‘are on the slippery slope already under Ole,’ and that United ‘are short of match-winning qualities at this level’.

‘By United’s standards this losing run is a crisis.’

Don’t let The Sun go down on me
‘Solskjaer, eight successive wins in charge of Manchester United, is on the way to mastering his art.’

‘United are brimming with ideas. The interim boss is certainly getting the hang of it.’

‘This winning run is bound to end eventually but Solskjaer’s influence on this United side has been truly astonishing.’

‘There is a swagger about them – a confidence not seen since Sir Alex was lifting pot after pot.’

From ‘back to the good old days’ to ‘a crisis’ in two and a half months. Impressive turnaround.

‘Manchester United will summon up spirits and omens from far and wide as they go in search of a second Champions League miracle in Barcelona – but the bottom line is a brutal one.

‘This Manchester United team cannot consider itself anywhere near Europe’s elite and the freakish events that saw United claw back a 2-0 home loss to overcome Paris St-Germain in the last 16 rarely strike twice.

‘No doubt we will hear about that incredible night in Paris, how seemingly insurmountable mountains can be climbed and how it is 20 years since United’s only win in the Nou Camp – the dramatic 1999 Champions League final win against Bayern Munich.

‘There might even be a mention for the Champions League semi-final against Juventus in Turin that same year when United came from two goals down to win 3-2.

‘It is a romantic narrative but Barcelona deal in reality. With United 1-0 down, it would be truly astonishing if Ole Gunnar Solskjaer’s side came through next Tuesday’s quarter-final second leg to reach the last four where, in all likelihood, Liverpool would await.’

So the ‘romantic narrative’ of United drawing on the past to succeed in the present is completely dismissed by the same man who wondered whether Liverpool are ‘now being guided towards their first title in 29 years by destiny’ less than a fortnight ago? Lovely.

Presumably accident pun of the day
Writes Neil Custis in The Sun:

‘Lionel Messi got a bloody nose – but so did Manchester United as their Euro dreams took a whack.

How much credit are we giving Custis for ‘full-bloodied’ there?

Failing to hit the target from any of his three shots, creating fewer chances than Paul Pogba and assisting an own goal is hardly the stuff of nightmares.

Bear in mind too that the player who ‘returned to England to haunt Manchester United’ received the same match rating as four United players and two Barcelona teammates, and lower than Sergio Busquets.

The man who was in charge of those player ratings? David Anderson.

Master rating
Speaking of player ratings, Wednesday’s game inevitably threw up some classics of the genre.

The Sun must be cursing the fact theirs are compiled by WhoScored.com, as Ashley Young was apparently as good as each of his United teammates (6) aside from Luke Shaw and Romelu Lukaku (5). Which was definitely not the case.

Over at the Daily Mirror, Young – ‘struggled and wasteful in possession when he got forward – received the same rating as Shaw – ‘deflected in Suarez’s cross and is suspended for next leg’. And that seems harsh on the latter.

The Daily Mail believe Young (5), who was ‘lucky to escape card for early foul on Coutinho and was guilty of poor distribution at times,’ was only half a point worse than both Arthur and Sergio Busquets (5.5), the latter of whom was the Daily Mirror‘s man of the match with a ‘classy’ 8/10 performance.

Then there is the Manchester Evening News, who give Young a glorious one out of ten. It’s not quite the biggest match rating disparity ever, but it’s not too far off.

Mind you, let’s not forget L’Equipe, who saw Young record the lowest pass accuracy of any player and fail to find a target with one of his 11 crosses and still thought he was as good as Lionel Messi (4).

Boiled Rice
In other United news, Declan Rice has ‘risked’ the ‘wrath’ of the club’s fans. The Sun website sheds a light as to how.

‘Declan Rice faces fight to win over Man Utd fans after transfer target likes post of grinning Carragher with ex Liverpool duo Suarez and Coutinho,’ reads the headline to a ‘news story’ that claims the midfielder ‘could have his work cut out winning over’ supporters.

Of course he could.

Over to you, Ole…

“All the best and see you next week.”

Juicy. But also a huge oversight. He’s surely ‘breaking his silence’ with an ‘eight-word message’ there.

With thanks to Dave Payn. If you spot anything that you think belongs on this page, send it to theeditor@football365.com under the subject header of ‘Mediawatch’.