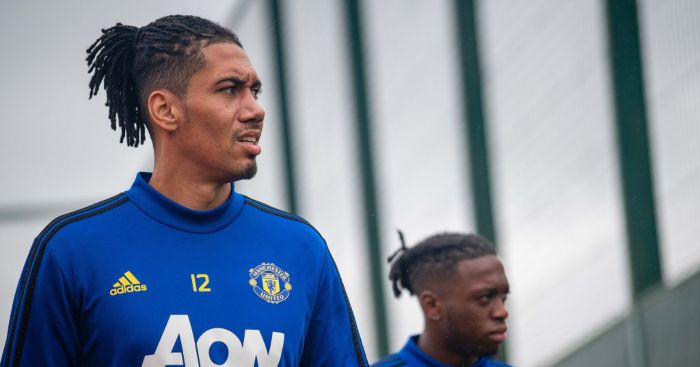 But you’ve got to say credit where it’s due, it is not an easy thing to move abroad, especially it seems for English players, so fair play to magic Mike, I hope the slower pace and lower intensity (Cliché alert) of the Italian league will suit him and Roma will sign him permanently and that he finds a bit of success and gets a bit more credit in the twilight of his career.

And now for the predictable rush of injuries to our central defenders…..
Mangor United, Belfast

I can’t help but feel that United are making a f***ing huge mistake letting Smalling go.

Perhaps it boils down to the individual players and the subsequent interested parties, but how is he leaving ahead of Marcos Rojo or even Phil Jones?

I get keeping Eric Bailly around. There is clearly a decent defender there who they won’t get anywhere near their money back for currently. Axel Tuanzebe and Timothy Fosu-Mensah also provide decent cover if needed.

But letting Smalling go over Rojo? Loaning out a solid squad player with no option to buy at the end of it? I don’t see how United benefit. Liverpool have decided to keep Dejan Lovren as their fourth choice whether he is particularly happy about it or not. He is their player. They decide what happens, not him. It should be the same for United.
Steve

Club house
In regards to Matt’s question this morning on whether PL clubs should take lower league teams under their wing, I’d kindly point him (and anyone else interested in food and football chat) towards this week’s Set Piece Menu where the gents discuss this at length.

In summary, yes it could work for the “big brother” team, in that players in their youth system get competitive game time, and for the “little brother” team as they get financial security and a stream of semi-decent young players.

But therein lies the issue – the lower league teams will lose autonomy as they will become so reliant on the big teams’ players and money, the players themselves may see absolutely no motivation to play well for said smaller team, and the bigger teams can just pack out the smaller teams with youth players and this will turn the lower leagues into PL2, PL3 etc etc.

More to the point, I think, as Matt rightly suggests, is why the f**k would supporters of lower league teams, who go due to a local/historical connection and a love of the club, want to see their team filled with youth players from a bigger club? It ceases to be their club, and becomes a play thing/over elaborate academy for the big clubs. I don’t think anyone wants that (apart from all the premier league club bosses).

Have a good weekend all,
Joe, Lowestoft Town FC (up the Trawlerboys)

Feeder clubs. That’s what Matt’s suggesting in this morning’s Mailbox – there’s no “essentially” about it – and it’s perhaps the only more contemptible idea in recent years than Premier League B teams. Of course, that’s because it’s that same detestable idea, but with the added “bonus” that you’re taking a great big dump on long and proud histories, whole communities, and most importantly the supporters of those clubs.

Matt ponders “I don’t know how it would sit with the fans of the club knowing that they were essentially a feeder club”. I can’t speak for the millions of lower-league fans across the country, but I can tell you this much – the support for such an idea might possibly stretch to the hundreds, at a push. Personally, I’d cut all ties with my club were that to happen – and I love my club. You may ask “yeah, but what if your club was in danger of going under?” – well it was; we (Huddersfield Town) came within hours of liquidation less than twenty years ago, and I’d still have categorically rejected the idea.

You want some proof? Look at the reaction to the idea of allowing Premier League B teams into the Checkatrade Trophy (and I urge you to read this superb article if you’re in any doubt) and the resulting attendances.

The Premier League has caused – and continues to cause – a whole world of trouble for lower-league clubs; the likes most armchair Big Club fans are wilfully ignorant of. Let’s not make things even worse, eh?

As for the condescending notion of the “benefit” of a few loanees – I’ll leave you with a short segment of the aforementioned article:

“We do not give a f**k about your Premier League youngsters. Not a flying f**k. Not a walking f**k. Not a static f**k. We have been to the cupboard and we have no f**ks. We have checked online and there are no f**ks in stock.”

Glad I got that off my chest.
Lukas

Wanton boys
I can only see two possibilities of a new winner of the European cup this season . Atletico and Manchester City .

After so much summer football during 2 closed seasons in a row the stresses and strains (“wars”),  are bound to take their toll . Both City and Atletico have bulked up their squads and when the plagues of injuries start to affect all the top teams these 2 can take advantage . Already Barcelona and Madrid are suffering . United, Chelsea ,Liverpool , Spurs and Arsenal are guaranteed to suffer  plagues of injured (though “cell science”  may accelerate their come-backs ) and none have the necessary high quality replacements , though I would love to see United´s young midfield creators get into the first team via injury lay-offs .

In fact, that is the one upside of this ´too much football´  ( “multiplying wars and crimes”) situation , the likes of Fati ,Foden, Willock, Brewster and Angel Gomes could show off their skills  (“wanton boys”? ) .

On a tenuously linked theme my heart did sink a bit upon seeing the UEFA cup final venues in Gdansk -13 hundred kilometres and Istanbul / Constantinople -25 hundred . (“wanton” disregard of fans by enriched men on their UEFA gravy train ) . “They kill us (and the players ) for the sport” , not forgetting the filthy lucre .
Peter  (R.I.P. Xanita)  Andalucia

Chelsea dagger
Does my fellow Chelsea supporter, Mikey, assume that because Tammy Abraham bagged a brace against (an albeit impressive) Norwich that we’re suddenly good enough to top our group? I’ve been thoroughly encouraged by our start this season, but let’s not pretend that we deserve to be a Pot 1 team – I’m sure that most clubs would’ve been eyeing us up as the ideal team to be drawn against from that Pot!

I’m so excited to be back in the CL, but it’s going to be far tougher than you expect.
Tom-alom-alom-alom.

Friends reunited
Just thought… if Zidane can’t turn round the fortunes of Madrid, Pogba forces his move in January to become there savior, plays like the fanny we know he is and Zidane gets sacked, Mourinho, who is reportedly waiting in the wings for just such an event, then becomes their manager, we have the delicious prospect of Mourinho and Pogba back together to continue their mutual love in.

Correct
In your Frozen Out article today you describe Brighton’s Tudor Baluta as someone “who we had literally never encountered before this very minute.”

The England U21 team probably feel the same given he was part of the Romanian midfield they couldn’t get anywhere near in the 4-2 loss during the U21 Euro’s back in June.

For me personally it has been a sh*t few years, but for my football team-Manchester City, it has been the best in their history.

Much like the Leeds fan who said he approached his articles with dread but knew they’d be fair, that’s exactly how I saw it- unfortunately I didn’t read any of his articles about our previous owners going back to Swales.

I read his book about City and his first book and he is just amazing so fair, so even handed and by the end of today’s article about David Conn i had tears in my eyes because I still hope and believe in good people in times like these.

I feel so sorry for Bury and their fans, that their happiness has been torn apart from 2 nefarious, devious (insert insult here) knowing that but for the grace of a deity it could have been us.

I hope Bury become a phoenix club, owned and run by fans who care and they continue to play at Gigg Lane and David Conn included on any independent board that EFL or the government set up to improve our game.