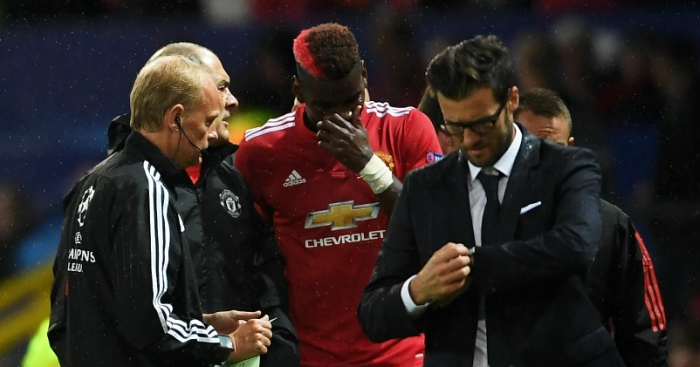 Manchester United fear that Paul Pogba will be injured for a further two months.

Pogba has missed United’s last five games since coming off against FC Basel feeling his hamstring.

There were reports in the week that United’s medical staff and Jose Mourinho were angry at Pogba using his own fitness trainers and playing basketball. This news will not help matters.

Pogba is now expected to be absent for all of October and November, and return to action in mid-December.

The Sun claim that a source even believes that Pogba could be out until after the Christmas fixtures.

Still, we can’t take that Sun story seriously because it is followed by this horrific pun: ‘Pogba was vidoed (sic) dancing behind a car wheel this week but Mourinho already knew the Frenchman will not be a driving force on the pitch for quite a while yet.’

United have enjoyed a gentle start to the season, but will face many of their likely title challengers during October and November. Pogba’s absence will be keenly felt, even if Marouane Fellaini has suddenly become a bloody goalscoring superstar.