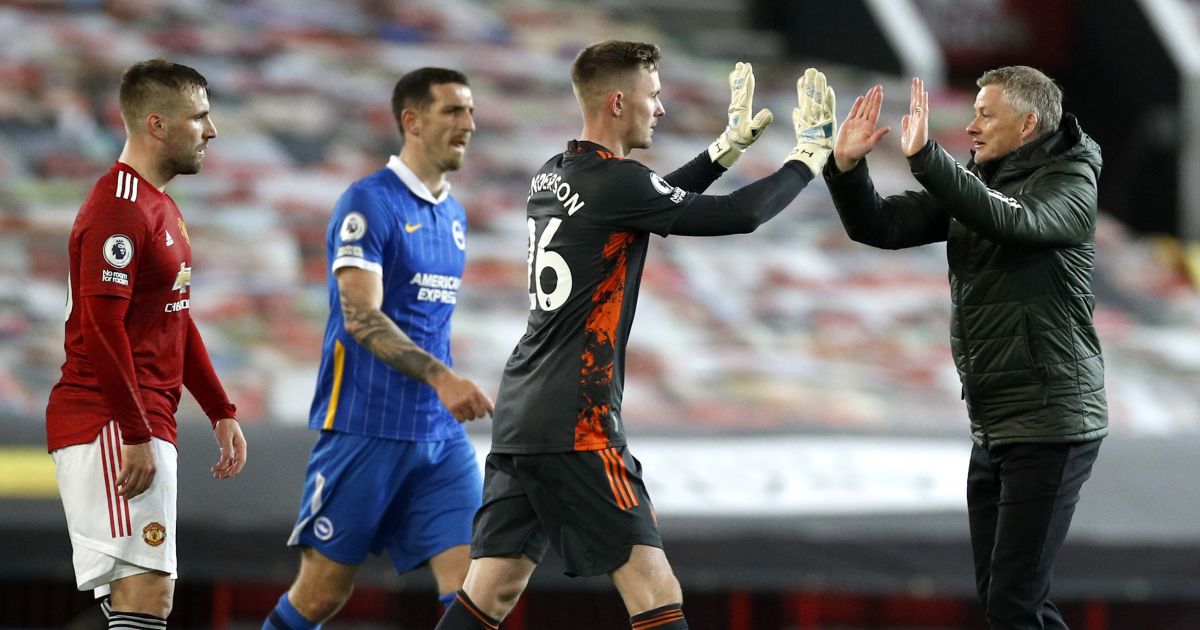 The first half of this 2-1 win over Brighton at Old Trafford was quite something. While Brighton fans won’t want to hear it, it was another 45 minutes that left you wondering what Graham Potter might achieve with a higher-standard squad, perhaps an underperforming one from North London where most of the squad have been so paralysed by fear and repeated bus-wheel crushings and public shamings that they are scared to move, let alone attempt to complete basic football tasks like not allowing Newcastle to have 22 shots.

But I digress, for 45 minutes this was pretty embarrassing for United, and Solskjaer in particular, so comprehensively were they outthought and outfought. You found yourself wanting to pause the game just to do a headcount and make sure Brighton had only 11 players on the pitch. There just always seemed to be so very many blue shirts. Seven in this attack, now five behind the ball and three harrying the man in possession, now two men over on the attack again. The perception of two completely different methods was hard to avoid. One team of, with all due respect, journeymen and grafters who had been coached and prepared for every possible situation they might face and a team of superstars not far short of winging it.

It’s not the first time it’s happened to United, and for all the grit and fight they possess it remains hard to shake the notion that this incredible record of coming from behind to win games also shows the ceiling for this team under Solskjaer.

Even in the much-improved second-half display, there was some fortune about the turnaround. Having scored against his former side, Danny Welbeck could very easily have had a penalty when the score was 1-1. United’s equaliser was beautifully crafted, Bruno Fernandes waiting for the perfect moment and applying the perfect weight with his pass to allow Marcus Rashford to apply a neat first-time finish back across Robert Sanchez, but the winner came when Greenwood reacted fastest when Paul Pogba miskicked a volleyed attempt on goal.

On balance of play and weight of pressure, United just about deserved it as they so frequently do in these games. But why they so often need the kick up the backside of falling behind or at least making life harder for themselves before producing this sort of display is a valid question.

Right now it certainly falls into the category of nice problem to have – “you are winning too many games after falling behind” is an intrinsically odd criticism. But there is something in it. Have United given any thought to perhaps not falling behind in the first place? Call me a maverick with crazy ideas that could never work if you must, but I do think it’s a tactic they should seriously consider.

United have now come from behind to win both league games against Brighton this season, and this one is by far the less dramatic because this time the winning goal came before the final whistle. That’s just not a thing that should not be a thing, surely.

Ultimately, I guess, United are now pretty much certain to achieve their objectives for the league season, and it doesn’t matter much how they’ve done it. It’s just a bit weird. The beauty of the coming-from-behind phenomenon is that it’s a hugely positive stat that by definition carries inside it an intrinsic negative. You can argue whichever point you want with it. It can be proof of Solskjaer’s in-game intuition, or his ability to motivate his players to higher levels after a slow start.

Or it can prove that Solskjaer’s preparation and initial team selections are flawed. It can show that this squad of players is overachieving through its refusal to admit defeat, or underachieving by constantly making life harder than it needs to be.

In conclusion, then: Manchester United are either very good, or they’re not. And so’s their manager.