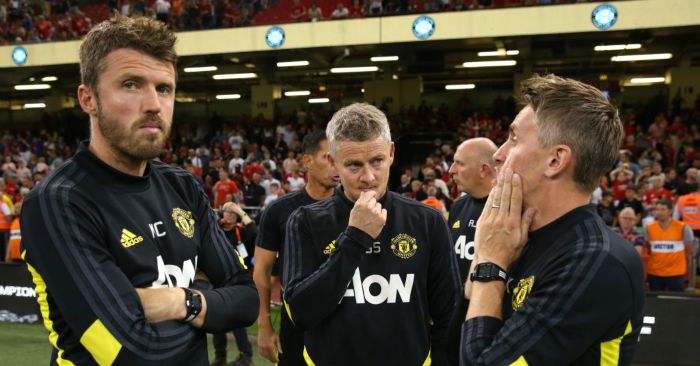 Cyberloafing is an American term used to describe the actions of company employees who use their internet access in the office for personal enjoyment while offering an impression that they are busy at work. Anyone reading this and pretending they haven’t dabbled in it is a liar. Football365’s traffic peaks during the day and slumps in the evening. Perhaps you all work nights; I’m not convinced.

The key to clever cyberloafing is to master the art of looking busy. Furrow that brow, move the mouse around, type a few things on the keyboard and occasionally nod your head as if to confirm a vital piece of information. All the while you’re following live Ashes text updates with web.WhatsApp open and tinkering with your fantasy football team. A work spreadsheet stays open in another window for the one-second Alt+tab challenge in case a senior colleague attempts to ruin the fun by actually checking up on you.

This summer, Manchester United have been linked with more than 100 different players. Some names were leaked by hopeful agents or selling clubs, others by United themselves. Not all were likely and some were downright nonsensical. But after two months of rumour and counter rumour, nip and tuck, not enough has changed. With three days of the transfer window remaining, United have signed a full-back and a young winger, with a centre-half imminent, while losing a first-team central midfielder to Paris Saint-Germain. They have ignored the off-field, structural problems. They have mastered cyberloafing, persuading everyone that they are working feverishly while achieving far less.

A year ago I wrote a piece detailing the reasons why Manchester United were 7/1 to win the title, the longest odds they had been in Premier League history. There were several obvious reasons: Manchester City’s dominance, Jose Mourinho’s mood, a lack of transfer activity and Liverpool meaning business.

But to those of us who grew up during United’s domestic dominance, it still jarred against our inherent norm. Your favourite football shirt, World Cup, bands and films are often those that you experienced between the ages of 10 and 16. Psychologists may remark that you are clinging onto childhood, when your mind and body was changing and you were able to be carefree and irresponsible. The same is true of football clubs. To a generation, Manchester United majesty lies deep within us. It becomes anti-normal to begin a season prediction with the words ‘Well United can’t win the league’. Alex Ferguson indoctrinated us.

Twelve months on, Manchester United are 40/1 to win the league title in places, even with Harry Maguire due soon – almost six times less likely than in August 2018. It is not an exact measure (bookmakers set prices at a point where they can tempt in punters and guard against losses), but the crude conclusion is this: We could play out this season 41 times and United would win it once. More pertinent still is that United have slumped from third favourites – behind Manchester City and Liverpool – to fifth favourites behind the same pair plus Tottenham and Chelsea.

By any usual measure, Manchester United should be excited about the new season beginning. They have signed one of the best young full-backs in the country, and one of the best young wingers. They will probably line up with five £50m signings, three more that cost £30m and two fine youth products. That XI might contain ten outfield players aged 26 or under – Luke Shaw, Wan-Bissaka, Anthony Martial, Marcus Rashford, Paul Pogba, Victor Lindelof, Maguire, Scott McTominay, Jesse Lingard and Romelu Lukaku. That is just about the perfect blend for an elite club: Statement signings, expensive recruits around them and those who retain a deep connection to the club.

But speak to any Manchester United supporter, and understand the power of damaged ambition. Some might still believe in a top-four finish, but just as many are worried about the threat of Leicester City, Everton, West Ham and Wolves. Over the course of the Premier League’s 27-season history, those four clubs combined have finished above United twice (Everton in 2013/14, Leicester City in 2015/16). No reasonable United match-going fan believes in a meaningful title challenge.

That expectation is so painfully low reflects the unforgivable mismanagement at boardroom level. It is not that money hasn’t been spent – Maguire’s arrival will take United’s investment on transfer fees alone above £850m since June 2014 – but United have no blueprint or long-term vision. Transfers seem to happen because they can, rather than because of a strategy being executed. They are the dozy bluebottle, bumbling and bumping into the glass hoping to find the open window.

The principle task for this summer was not to sign players but to address the structure of the club’s decision-making process. Ed Woodward’s acumen in securing commercial deals cannot be doubted, but long-lasting evidence suggests he lacks the experience or expertise to carry out the club’s transfer business. A sporting director was the necessary next step.

Solskjaer said as much in April: “I think the demands of football nowadays means you’ve got to split responsibilities.” As someone with the goodwill of supporters following his impressive caretaker spell, he had to push for that change this summer. Instead we were witness to leaks that the plan had altered, and no sporting director would be forthcoming.

There is only one measure by which Solskjaer is fit for this job: knowing the club. Not only does that mean less and less as Manchester United drift further away from the club Solskjaer knew under Ferguson, it can only mean anything at all if those above him facilitate his job. Surround Solskjaer with experts above and alongside him and allow him to focus on motivational and man-management qualities.

Instead United have become a blame drip: Glazers to Woodward, Woodward to Solskjaer, Solskjaer to players. It’s an oft-repeated view on these pages, but Manchester United’s success rate with expensive signings is unforgivably low. Blaming those players misses the point. Don’t be surprised when a massive hole in the roof leads to the expensive furniture showing signs of damp and decay.

Sporting directors don’t just help buy players, but negotiate their exits. The list of the great unwanted at Old Trafford is long: Chris Smalling, Ashley Young, Matteo Darmian, Nemanja Matic (if replaced), Lukaku (if replaced). But the only two players United have shifted are Antonio Valencia (whose contract had expired) and James Wilson, who hadn’t played a first-team game since October 2015. The greatest indicator of a poorly-managed club is a squad that is somehow simultaneously bloated and light on options.

Yet the one person who benefits in this mess is Solskjaer. See how his rampant optimism has shifted to managed expectation over the last five months. In March, United’s manager spoke of glory – “To lift the Premier League trophy again is what we expect and what we’re used to.” By July, he seemed more realistic: “There are six teams who want to challenge for a Champions League place, there are one or two teams underneath who would also like that…I’m sure we’ll get closer to the top.”

Manchester United’s cyberloafing actually eases the pressure on Solskjaer. There is an unpleasant dichotomy to his obvious desire for United to be the best they can be: if they were, he would not be the manager. Had the club done its duty off the pitch, appointed a sporting director and signed all key targets, Solskjaer would look out of place.

As it is, finishing fourth feels like a huge success. For Arsenal and Chelsea, respectively hamstrung by budget and an untried manager and transfer ban, that might sit well. But for a club with the third highest revenues in world football and the highest in England, it is unforgivable. This was the summer that Manchester United had a chance to clear the decks. Instead, they have merely rearranged the deckchairs.