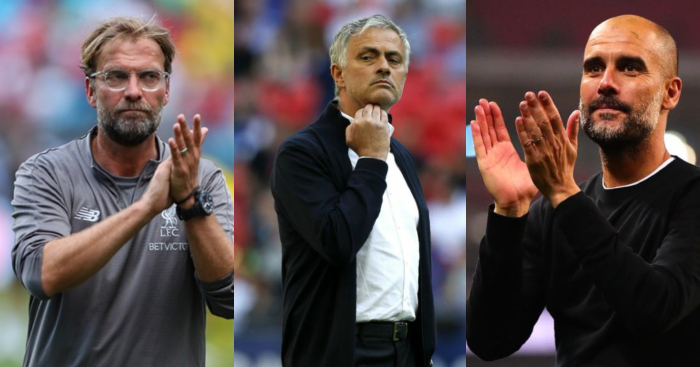 With the World Cup ending on July 15 and the new season beginning on August 10, managers of the Premier League’s elite clubs have been forced to turn to youth.

On Saturday evening, Manchester United, Liverpool and Manchester City were all in action and all used a number of academy players.

See if you can spot the difference:

“All the young boys who came on are in really good shape this pre-season.

“Sheyi [Ojo] is a really confident boy as he showed tonight, not only around the penalty when he sent Daniel Sturridge away! You need balls to do that!

“Pedro Chirivella in the No 6, a fantastic football player. Curtis Jones played his first game as a full-back in front of 100,000 people – I would have been nervous, he wasn’t.

“Rafa Camacho plays a pre-season that is just fantastic, mostly as a full-back which he’d never played before, so they’ve learned a lot.

“Ben Woodburn is 100% back for example. How it is with young boys, from time to time the improvement doesn’t go day by day, but he has played such a good pre-season.

“Nat Phillips, my god – what a pre-season he has played! These boys are completely open.

“If I said run right, they would run right. I am really happy to see their progress. What we will do with that and when we will see. We don’t decide tonight.”

“I am so satisfied for this tour and what these guys have done. It was the same in the previous two games – I said how proud I was.

“We have come here with a lot of young players and just one professional player from the first-team at the start – Claudio Bravo because Laporte was injured.

“On the other side, I am so satisfied for this tour and what these guys have done. It was the same in the previous two games – I said how proud I was.

“So for them, it will be good for the future. It helps them to understand the game. I like to see my players fight for our teammates and play like a humble team.

“You cannot imagine how much I have enjoyed these two weeks with these guys. The young guys have desire. They open their eyes and listen because they have their whole career ahead of them. I want to say thank you to them.”

“We started the game with a lot of players who will not be in our squad on Aug. 9. This is not my squad, not even half, not even 30 percent of my squad. So don’t look to this.

“Look, do you want him to be very happy with the players he [Alexis Sanchez] has around him? We are here just to survive and to have some not very ugly results. Alexis is the only striker we have. And the poor man is there trying his best.”

Are we reading too much into this stuff? Doesn’t this matter? Isn’t it a question of motivation and man management?