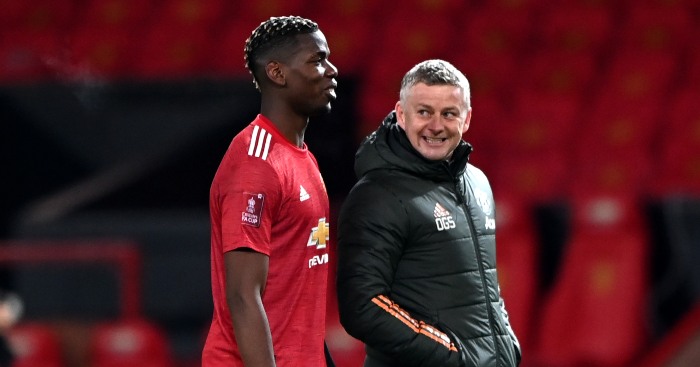 Everything to do with Manchester United is news. If they’re great, it’s big news; if they’re awful, it’s probably even bigger news. But if they’re sometimes great, sometimes poor and mostly somewhere between those two poles, that’s confusing news and is no use to the modern world at all. We’ve seen this situation ever since Ole Gunnar Solskjær took over and even now, with his first win over Liverpool.

Look at how journalists in national newspapers continue to flip-flop on him, forever shifting position with each new result. One result and he’s a hero, the next a zero. A great motivator and tactician one week, only to be out of his depth the next. It is as though there is an impossibility to accept that both these positions have an element of truth and that you don’t have to be bloody brilliant to be top of the league, but nor do you have to be somehow scamming your way to the top either.

With a media always hungry for the clicks and currency that United’s massive global fanbase can deliver, not being able to declare categorically that they’re either a wonderful team with a great manager, or in crisis with a third-rate manager, creates problems because everyone knows that extremes deliver the most attention and thus money.

On the whole, United In Crisis is the best scenario for the press, TV and radio because everyone has got a view on how to put right what has gone wrong and thus the debate is engaged wide and loud. Mind you, United Top Of The League runs it close, as the millions of followers naturally want to bask in a return to their pre-eminence and being above Liverpool. Either position is fine. Everyone knows what to do with them.

But while Sunday’s win over Liverpool and being top of the league is good for the United Are Back business, the feeling that it is an empire built on eggshells is ever-present and it would surprise nobody if they lost three, drew two and won one of the next six games. And then where are we? In this season’s game of United Snakes and Ladders we’re forever climbing up and sliding back down.

Since Ole Gunnar Solskjaer took over the managerial job at Manchester United, one of the most entertaining things about his tenure has been to watch and listen to the entire football media diaspora trying to work out if he’s any good at the job, on a game-by-game basis. It hasn’t seemed to occur to anyone yet that maybe he’s neither and you can be successful being neither. Being brilliant not being a pre-requisite for winning a title might play against the idea that only the elites succeed in the game and thus makes us feel uncomfortable, but that’s what seems to be the truth in his case.

I’ve heard well-respected analysts being amazed that such a clearly mediocre manager was given the job and is still in situ. I’ve heard others tell me that he’s got the whole squad on side by being an empathetic manager and that the modern footballer responds well to his style. Can both be right? Or are both wrong?

One week he’s making terrible substitutions or no substitutions, the next he’s changing tactics mid-game to achieve a win. He’s turned a poorly functioning team of players into a winning machine or he’s organising a team of expensive talent poorly. Sometimes he’s on the verge of the sack, sometimes he’s going to win the league.

He has long winning or undefeated runs, and runs of losses. Sometimes they seem full of goals, other times not. Defensively they look suspect but, like on Saturday, they still manage to win. Occasionally they’re just outright poor.

Perhaps the fact that they have won 21 points from losing positions this Premier League season, more than twice as many as any other team and did it once again on Sunday, illustrates the issue perfectly. Not good enough not to fall behind but good enough to recover if they do. It is a very nuanced position to be in and in that, very unmodern.

Accepting that a manager, player or club is of fluctuating quality goes against the dominant binary culture, of course, where everyone is either under or over-rated, great or poor. That you might be successful being merely alright is almost revolutionary.

I can guarantee you that if I wrote this as a ‘Manchester United are lucky/not that good’ piece, or a ‘United are superb’ it would attract far more attention than this one will which is, in a way, saying both those things and something else as well. And that’s the problem. There’s been too much under and over-rating of this Manchester United manager and team.

As a neutral who predicted that United would win the league, rightly to much laughter and mockery, what is enjoyable about this is seeing all sides making their excuses for why their most recent judgement of the Norwegian and his team has been superseded by a new perspective, following the latest result. No sooner has one position been struck than something happens to contradict it. You can’t ask for more than that as an observer because nothing puts out the fires of romance like certainty.

United so dominate the media that perhaps this is all inevitable. But it is interesting that United’s season is the first in a very long time when it isn’t possible to make any hard and fast conclusions about anything. Whatever we say today could be contradicted tomorrow and then confirmed by the day after. ‘United Sometimes Good’ and ‘Solskjaer Doing Fine’ are not headlines that are likely to be written in the forever febrile UK press that increasingly deals only in extremes, but even so, it is probably nearer the truth…at least this week.