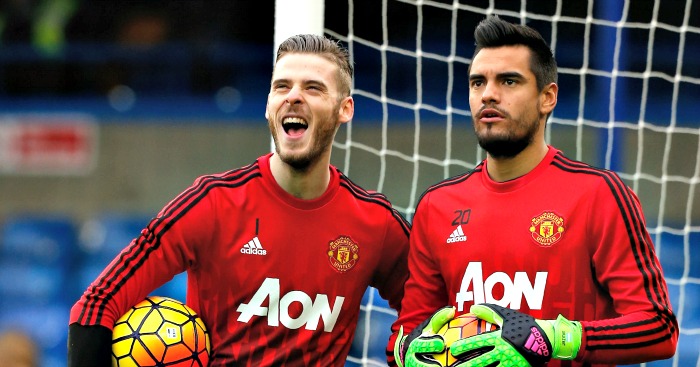 Manchester United may have to decide whether to give Sergio Romero a payoff to secure his exit in January.

Romero is furious at having not been allowed to leave in the summer, with a move to Everton in particular failing to get the approval of Manchester United.

The club did not name him in their Premier or Champions League squads but refused to sell the Argentinean to a direct rival.

Romero is therefore stuck in Manchester until at least January, at which point he will seek a move after attracting the attention of Spanish club Racing.

He has returned to training at Carrington but is ‘counting down the days’ until his departure, according to The Sun.

There is hope that his ‘misery’ will be brought to an end when a potential suitor makes a good enough bid, but it could come down to whether Romero wants a payoff or not.

Romero will not receive the same wages as he does at Manchester United elsewhere and would have to forego around £1.5m if he is to leave in the winter.

But he could sign a pre-contract when the window opens ahead of a move when his current deal expires in the summer, depending on how ‘desperate’ he is to go.

He is currently training alone at Manchester United, who have David de Gea and Dean Henderson ahead of him in the pecking order, as well as third-choice keeper Lee Grant.

After making 61 appearances for the club there was hope for Romero that he would at least remain as deputy to De Gea, if not given the chance to properly compete with him for a starting place.

But Henderson’s return from a loan at Sheffield United forced him further out of the frame under Solskjaer, leaving Romero with no choice but to leave in search of regular football.