English teams struggled in the nascent Champions League. So did Manchester United. Then Porto came to visit. 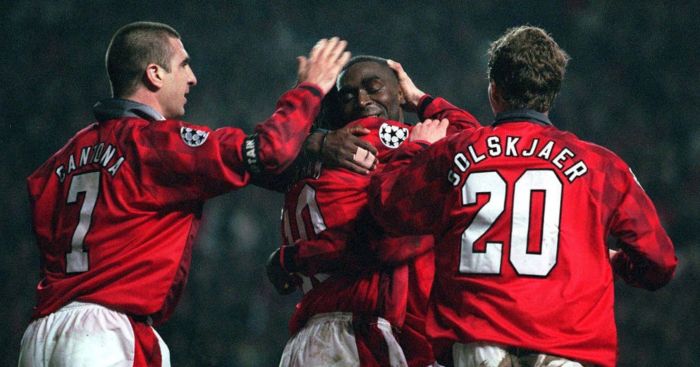 English teams struggled in the nascent Champions League. So did Manchester United. Then Porto came to visit.

Brian Moore just made football sound more important. What a voice he had. Let the sun go down, turn on the floodlights and put him behind the microphone, with that gravitas and growl and that innate ability to make any game sound more significant.

Manchester United beating FC Porto 4-0 in 1997 was significant. Looking back now, through the lens of what the Premier League has become, an English team trampling a Portuguese side looks like a common part of any season. But then, it was a British waypoint in the still nascent Champions League, a competition which had befuddled English clubs for most of the decade.

The season before, Blackburn Rovers had finished bottom of a group containing Spartak Moscow, Legia Warsaw and Rosenborg. In 1992-93, Leeds United got only as far as the second road of a straight knockout, before being beaten in both legs by Rangers and eliminated.

Manchester United themselves didn’t take easily to the new era of European football. Knocked out in the second round by Galatasaray on away goals in 1993/94 and failing to emerge from a group with Turkish side, Barcelona and IFK Gothenburg in 1994/95, they were still climbing the learning curve in 1996/97.

Their performances were typically strange, with their strutting fluency often stuttering to a nervous caution in Europe. That season’s group stage was really no different. Juventus beat them home and away, Fenerbahce won at Old Trafford thanks to a big loopy fluke, and while they would ultimately qualify in second place, they’d needed a miracle save from Peter Schmeichel in Vienna and a favour from a second-string Juve.

Alex Ferguson was never quite at ease, either. He was strolling across the Premier League landscape by then, demanding penalties and time added on and reminding everyone that Arsene Wenger had only just come from Ja-PAN, but in Europe it was rarely the same manager. Or even the same man. Following United’s defeat in the Stadio delle Alpi, he was critical of Ryan Giggs’ performance in his post-match interview, breaking his own rules by castigating a player in public.

Game-to-game he would tinker with his tactics and tweak his line-up, twisting the Rubik’s Cube one way and then the next, pivoting around the restrictions on foreign players. A Karel Poborsky here, a Jordi Cruyff there. Eric Cantona, that vivid symbol of United’s domestic authority, would somehow always become subliminal, and marginalised from the play with his back to goal.

Porto – United’s quarter-final opponents – were a caricature of an Iberian team. Their manager, António Luis Oliveira Ribeira, a great moustachioed cliché, oversaw a squad brimming with exotic excellence. Drulovic, Jardel, Zahovic, Sergio Conceicao; each with minus-two potential, like some quixotic Championship Manager save.

English football hadn’t quite shed its inferiority by then. The way the media treated foreign sides and players wasn’t quite respectful, it was more like they held them in comical awe. These weren’t football players at all, but nightmare characters from a sporting fever dream, all possessing too much skill and too much nous for a team which was still largely British and Irish.

And if those weren’t advantages enough, then they’d surely just cheat. Beware the diving, the time-wasting and the conning of the referee. That was the message. Looking back now, to the more jingoistic fringes of the ’90s tabloids, it’s remarkable how fearful of ‘different’ football this country was, reflecting perhaps that the Premier League’s commercial success hadn’t quite gone to our heads.

In a way now not known for decades, the prelude preached caution. This was a dangerous opponent. This was an unkind draw and a game that Manchester United didn’t want. Porto were drawn up to sound like they came from a different plain of evolution.

They probably even did tactics.

But so did Ferguson.

Even now, it’s a formation to narrow the eyes and straighten the back. Beckham was really only a central midfielder in his own mind, Ronny Johnsen was a converted centre-half and Cantona’s impulse was, of course, to dictate with the ball at his feet.

It was a masterstroke, though. Manchester United were sensationally good. The three-pronged forward line probed space that Porto were never able to protect and Giggs, Cole and Solskjaer blurred in a flurry of movement, drawing the visiting centre-halves too far out, too deep, too wide and too narrow.

It was one of those nights when the life at Old Trafford seemed to pound through the television screen. An early goal from David May, which still looks like a physical impossibility to this day, was followed by a fierce drive from Cantona which cut the goalkeeper in half. A dazzling move between Cole and Giggs ended with the winger thrashing the ball under Hilario for the third and, finally, Cole drifted a chip into the bottom corner to add an arty, elegant fourth.

Set to the music of Moore’s rising excitement, it was as compelling a spectacle as an English team had been a part of in the Champions League to that point. In the public’s mind, perhaps, it changed the perception of the tournament from one which might be won by teams playing on Channel 4, to one which could be won by United. Martin Edwards’ prohibitive wage-ceiling be damned.

Elsewhere in Europe that season, Arsenal had lost to Borussia Möenchengladbach in the first-round of the UEFA Cup, Aston Villa were eliminated by Helsingborgs at the same stage, and Newcastle progressed to the quarter-finals only to be humbled by a Monaco team which included Ali Benarbia, John Collins and a young Thierry Henry.

English inferiority really wasn’t a figment of the imagination, it was in evidence everywhere, and tended to be reinforced each and every season. Arsenal may have won the Cup Winners’ Cup just three years before, with an Alan Smith goal enough to see off Parma, but that was an exception – and, after all, the more recent memory was Nayim’s opportunist punt in 1995 and, again, an English team being the butt of a joke.

United didn’t cure that. Not even for themselves. Their reward was to be eliminated by Borussia Dortmund, in two legs they dominated but somehow lost each time. Then, they came face-to-face with Cantona’s mortality.

His performance against Porto carries no little irony. Finally, it seemed, Ferguson had found a way to replicate Cantona’s domestic influence. He scored the second goal and he was at the heart of the third and fourth; the carved, outside-of-the-right ball at the beginning of the move from which Giggs made it 3-0 was one of the prettiest passes of his career. At one point, Ron Atkinson even reproached him on commentary for a ludicrous flick, the kind that he only played when he felt he owned the pitch.

But the end was approaching. In his first autobiography, Ferguson recalled Cantona’s sluggishness against Dortmund, sensing an incongruous ennui to his aura. The mood had taken him. A day after United’s elimination, in Ferguson’s office, Cantona would first tell him of his plans to retire.

In time, he would cite exploitation by United’s merchandising department and frustration with the club’s inability to attract truly world-class players. That day, he would describe only a vague desire to take his life in a different direction, away from the pitch. Strange timing for someone who would just been within a game (and a lot of missed chances) of the European Cup final, but perhaps not to Ferguson, who had noticed Cantona’s ‘thickening’ physique and a gradual change in his attitude.

In a sense, then, the win over Porto wasn’t a beginning at all. A year later, they would win their group, beating Juventus at Old Trafford along the way, but they would lose in the quarter-finals, bounced out by Monaco on away goals in a game which showed that none of their issues had really been cured. For all intents and purposes, Manchester United still played as if their native style was beneath European football and that, to succeed, English teams had to mimic whatever fashions Barcelona, Milan or Real Madrid had made en vogue.

So what is the right context for that win over Porto? Football generally isn’t quite as neat and linear as we’d like it to be and the roots of success don’t always appear as they should. Cantona was to leave; Dwight Yorke, Jaap Stam and Jesper Blomqvist were all yet to arrive. So, too, Henning Berg and Teddy Sheringham, who would both be so fundamental to 1999’s treble.

On reflection, that wasn’t a team acquiring wisdom, it was one learning how it needed to be rebuilt and using live competition to discover its flaws.

No, Porto was more of a sensory purge than a practical victory. It was a defeat of the old British complex. It was a night which would lead ultimately just to another failure, but still an evening on which an English team, in its jackboots, its t-shirts and its plain jeans, were able to blow away the continent’s glitterati with some familiar power.