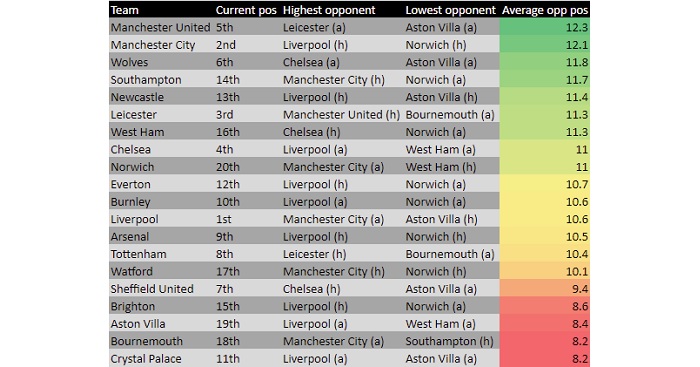 Now we can finally talk properly about the Premier League again, let’s look at the run-ins. Manchester United will be happy to be top of the table…

*  With four of the bottom six still to play, Manchester United are surely favourites to take one of the four Champions League spots, particularly if UEFA have rendered Manchester City non-runners in that particular race. They certainly have the form.

* Sheffield United may have the game in hand but what a run of fixtures: they face all four teams directly above them in the table. They start with their easiest fixture on June 17; fail to win that and this is an uphill task.

* Wolves might well fancy their chances of pushing Manchester United; three of the bottom six and a bevy of mid-table beach-dwellers come before a visit to Chelsea presents their only game against opposition higher in the table.

* Tottenham and Arsenal can find little reason for cheer here. The Gunners face five of the eight teams above them in the table, though they might only need to haul themselves one place into eighth to secure Europa League football.

* Brighton, Villa and Bournemouth all play four of the top six. If Norwich weren’t already six points from safety, you would fear for that seemingly doomed triumvirate.

* This table tells you that Liverpool’s run-in is far harder than what came before, but only a fool believes that they could cock it from here.