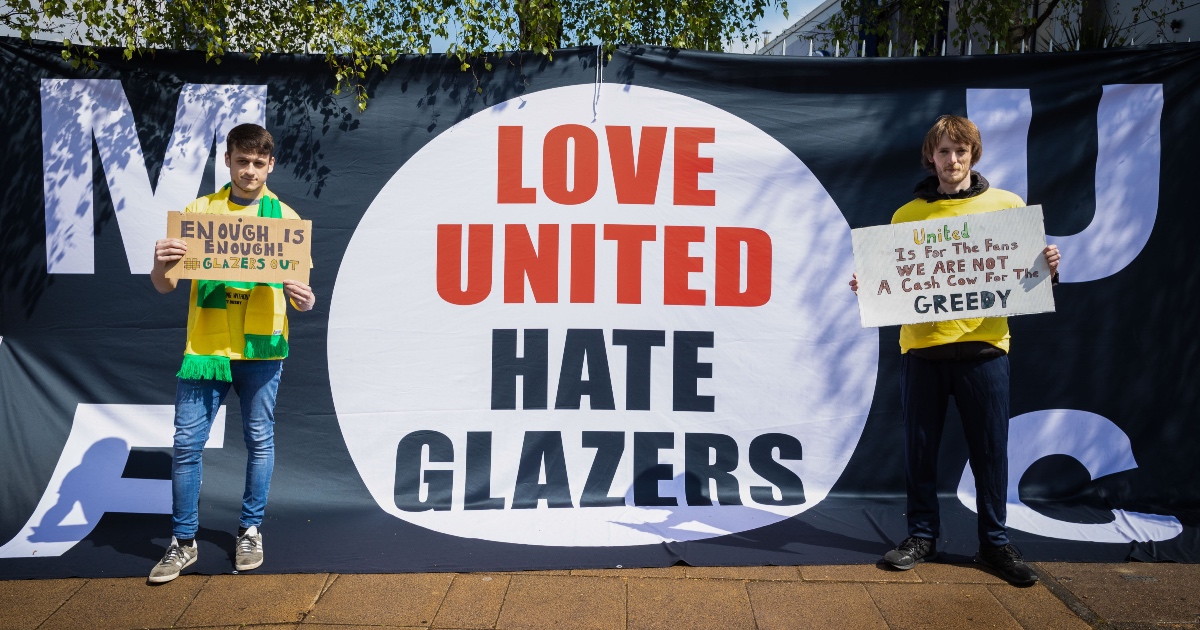 Clickheads
In 2021, every tweet designed to bring in clicks – which is every content tweet ever – is described and dismissed as ‘clickbait’, which has replaced ‘lazy journalism’ and ‘fake news’ as the response of choice for those who really just mean ‘I DO NOT LIKE WHAT YOU HAVE WRITTEN’. Which is a shame because the term really should be reserved for actual clickbait defined by Wikipedia thus:

‘Clickbait is a text or a thumbnail link that is designed to attract attention and to entice users to follow that link and read, view, or listen to the linked piece of online content, with a defining characteristic of being deceptive, typically sensationalized or misleading.’

Which brings us neatly to the Express website and this headline:

If you are thinking that Man Utd owners the Glazers issued a Harry Kane transfer message then you have been fooled.

If you are thinking that the Old Trafford protest is in any way related to this Man Utd owners the Glazers issued Harry Kane transfer message then you have been fooled again.

This is classic clickbait because it has the defining characteristic of being deceptive, typically sensationalized or misleading. Or all three.

Maybe it’s time for a new definition of clickbait? Maybe just ‘bollocks on the internet’?

Will somebody think of the baby-faced assassin?
Elsewhere on the Express website:

What a ludicrous argument – that Manchester United fans should not protest at the owners of their club and their perfidious dealings because they ‘must be careful of undoing Solskjaer’s hard work. With talk of possible points deductions, it would be a major kick in the teeth for the Norwegian’.

Yes, won’t somebody think of the poor, overpromoted manager who has taken Manchester United to within 13 points of the champions-elect Manchester City. He does not deserve to lose any of the 67 points that would have been good enough for fourth place in just about any other Premier League season. Put your placards away, boys.

Jack Otway writes that Ole Gunnar Solskjaer has been ‘nothing but impressive throughout the whole episode’. The bar must be hella low.

‘It was admirable seeing him navigate his way through a tricky press conference after the 3-1 win over Burnley last month. Instead of answering questions on Edinson Cavani’s resurgent form, it was dominated by talk of the European Super League.

‘Solskjaer, it transpired, had been informed of the Glazers plans just before the match. And he certainly made it clear in the aftermath that he opposed them.’

Sorry but did he f***. This is what he said, according to the Manchester Evening News:

Solskjaer did come out and say – after it had all collapsed and Manchester United had withdrawn their intention to join said Super League – that he was opposed to the concept, but there was no criticism of the owners. Indeed, only a few days ago he said: “I’ve been backed, I’ve had great support from the club and the owners and I’m sure I will get the backing again to go one step further.”

So pardon some Manchester United fans if they see Solskjaer as part of the problem and have no fear of some of his precious points being docked. But Otway is far from finished…

‘Fans are right to vent their fury at the Glazers for the way they handle things. United aren’t the superpower they were and that’s been allowed to happen on their watch.

‘But if more matches are disrupted, and points deductions follow, it will risk undoing all of Solskjaer’s hard work.’

First, it’s not about United not being a superpower at all; that’s Graeme Souness levels of misunderstanding the issue here. And pray tell, how are they supposed to protest without disrupting matches? A letter-writing campaign?

‘United have made plenty of progress under Solskjaer, climbing up the table year on year and, now, look set to finally win a trophy.

‘So if they were to be docked points and miss out on a place in the Champions League, it would be an insult to the Norwegian.’

So basically, keep quiet and embrace the status quo because Manchester United could finish second and win Europe’s secondary club competition, for which they qualified by being ejected from the Champions League. And be grateful for it.

‘So the next time fans think it’s a victory getting a match called off, they should think about their manager. The hero of the 1999 Champions League final who has worked hard to get the club back among the big boys.’

Or, they could see beyond the end of their noses and think about their club, ‘bought’ in a leveraged buy-out 16 years ago and loaded with debt, while the Glazers’ ‘corporate machinations have drained out more than £1bn’.

Do we really expect Manchester United fans to pipe down about the blood-sucking owners because the team is on the verge of replicating Chelsea’s efforts under Maurizio Sarri two years ago? Grow the f*** up.

Priorities
We would have recommended you read Neil Custis in The Sun on the Glazers but it does not appear to be available online. After all, why publish reasonable criticism of the Manchester United owners when you can exclusively reveal that one of the protestors snorted a ‘suspicious white substance’ off a flag?

FCTN 100
Ian Herbert’s piece in the Daily Mail might have been on the recommended list had he not fixated on a 100-day narrative that is a fiction:

‘IAN HERBERT: If Sunday gave the Glazers pause for thought, then they ain’t seen nothing yet… Man United’s owners have 100 days before fans are back at Old Trafford to stop the hell they’ve created’

‘If Sunday gave the Glazers pause for thought, then they ain’t seen nothing yet. The real danger for them comes when football fans are back, at the start of next season: 100 days from this Wednesday, to be precise. That is when the pent-up fury will really be felt.’

‘The sale of this £1billion-valued club, which is the Glazers’ main source of revenue, will not happen in 100 days, though the combustible mood of those whose anger has been bottled up during lockdown requires them to go big to placate supporters in that time.’

Recommended reading of the day
David Conn on the Glazers