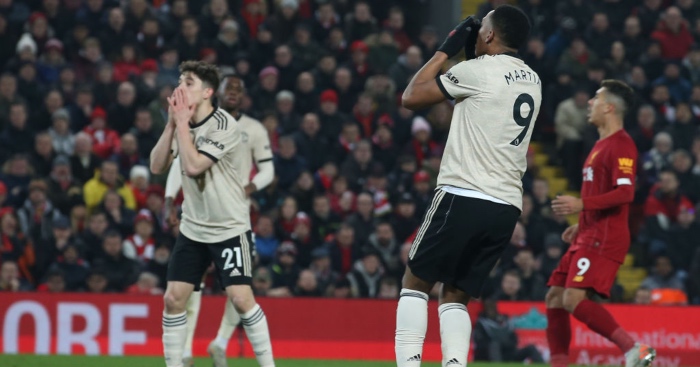 Roy Keane and Jamie Carragher have had their say on Anthony Martial’s “sitter” in Manchester United’s 2-0 loss to Liverpool at Anfield.

With Ole Gunnar Solskjaer’s United 1-0 down after a header from Virgil van Dijk, Martial surged through on goal but blasted a glorious opportunity high and wide.

It proved to be United’s best opportunity of the match, with Mohamed Salah putting the game to bed in added time to put Liverpool 16 points clear at the top of the Premier League with a game in hand over their title rivals Leicester and Manchester City.

And Keane thinks Martial’s miss speaks to a wider problem the club is facing: that he’s simply not good enough to be representing Manchester United.

“Martial has come to Man Utd and the big strikers score in the big moments, but his miss [in the second half] sums up is career at Man Utd,” Keane told Sky Sports.

“Excellent build-up play, but you have to hit the target. No excuses.

“The big strikers who are remembered by the supporters hit the target and the back of the net, and that’s why that guy [Martial] is not quite good enough for Man Utd. That moment summed him up.”

Jamie Carragher agreed that Martial should have scored, adding: “That’s not just a good chance, that’s a sitter.”