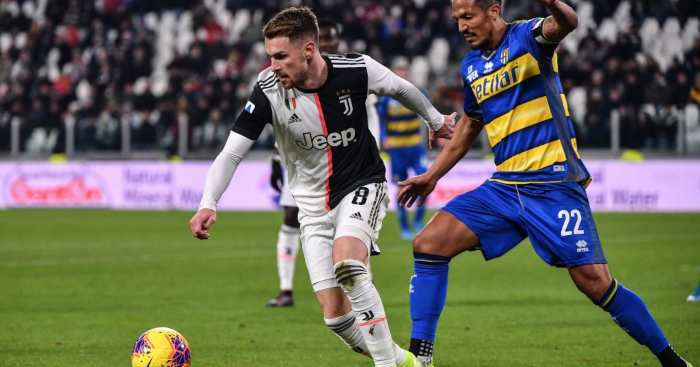 Tony Cascarino reckons Juventus could be tempted to sell Aaron Ramsey for £20m and that he would make a “perfect” signing for Manchester United.

The 29-year-old became the highest-earning British player ever based on basic salary when he joined Juve in the summer in a deal worth more than £400,000 a week from Arsenal, has only featured in 12 league games.

Speaking after Juventus won 2-1 at Roma on January 12, Bianconeri boss Maurizio Sarri said he was “convinced” Ramsey would have a good second half of the season and described him as “doing well”.

And reports on Sunday in Italy claimed that Juve could be looking to offload the Welshman already and Cascarino thinks a move to Man Utd would “make a lot of sense”.

“Ramsey would be the perfect fit for United,” Cascarino wrote in his column for The Times.

“Ramsey played in Juventus’ defeat away to Verona on Saturday but it was fairly typical of his first season in Italy as he came on as a substitute and didn’t have an impact on the game.

“I can see the former Arsenal man back in the Premier League next season.

“Reports linking him to Manchester United make a lot of sense as he is the sort of player they need – a proven midfielder with goalscoring pedigree and plenty of Premier League experience.

“I could see him not costing too much, with Juventus possibly settling for £20 million as that would get them most of their outlay back.”