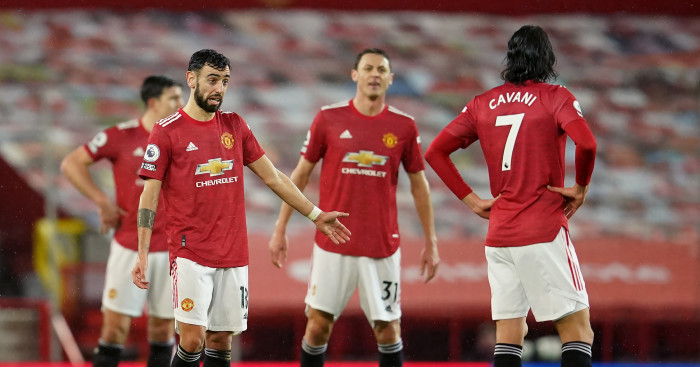 If you wanted to try to be clever, you could argue that this wasn’t quite as unexpected a result as it first appears.

Sure, Manchester United may have been bidding to return to the top of the Premier League, but it’s 11 games in all competitions since Manchester United won a game by more than one goal. They haven’t managed it in the league since that freewheeling 6-2 win over Leeds which feels about 400 years ago but was actually only just before Christmas.

And yes, Sheffield United had lost 16 of their first 19 games of the season, but 11 of those defeats had been by a single goal and they’d won three of their last four games in all competitions, actually.

So it wasn’t that unlikely, really.

Except that’s all bullsh*t and it was precisely as unlikely as it seems. A title-chasing Manchester United have been beaten at home by what was, officially, the worst ever Premier League team at the halfway stage of a 38-game season. At Old Trafford.

It’s a ridiculous result. Yes, the Blades had won a few but two were cup games against lower-league opposition and the other was against Newcastle FFS. Their defeat in that run was a thorough schooling against Spurs. That’s what should have happened here and only a fool would have expected otherwise.

Even when United fell behind in the first half having failed to deal with a corner you just shrugged and thought United were going to rack up yet more points from a losing position having won from such tight spots seven times already this season – including the reverse fixture at Bramall Lane.

Not  on Wednesday night, though. Have United been living on the edge for too long? Was this eventually inevitable somewhere against someone? Probably, yeah, but it feels glib to put this defeat down to the simple matter of luck running out. Two recurring themes in those comeback wins for United have been that they have generally come away from home for some reason but also more importantly that they ultimately have been thoroughly deserved. United deserved and got nothing here.

There will be grumbles about Sheffield United’s opening goal and Anthony Martial’s disallowed effort shortly afterwards. Both incidents only become controversial in relation to the other. Disallowing United’s ‘equaliser’ for Harry Maguire’s apparent foul on Aaron Ramsdale was definitely soft, but only particularly stands out when contrasted with Billy Sharp’s stumble into David De Gea for the opening goal. For what it’s worth, I thought Sharp was pushed into De Gea. It could have been disallowed, but would’ve been a softer decision still. Another quirk is that while Kean Bryan’s goal was checked and okayed by VAR, Martial’s was not due to the referee’s whistle going before the loose ball was swept home. Given how long we wait for offside flags these days, that’s probably the most significant error in the whole thing. It seems unlikely it would have been overturned anyway.

But to focus – like, to be fair, we just did there – on some pretty flimsy perceived injustice would be to miss the point. United didn’t lose because of those decisions, they lost because they played badly. From start to finish. Even after Maguire absolutely captain’s goaled them back on level terms with a thumping header, they couldn’t take advantage.

The second goal is a horror show from a United perspective. All dawdling and standing around and confusion and bad decisions from start to finish, with the deflection that takes the ball past De Gea the icing on a cake of sh*t. After conceding a goal of such crowning incompetence, it would be misleading in the extreme to switch focus to a couple of marginal decisions that went the other way.

There are plenty of theories as to why United were so poor. The Liverpool game was a big and draining one. The fact that the Leeds game we mentioned earlier was 12 games but only six weeks ago is also pertinent. United also, like most this season, just look less like a really good team than a team with some really good players. When all those really good players have bad nights on the same night, you’re going to be in trouble against anyone.

Certainly, while this is the standout remarkable shock of the season, it’s not an isolated one. You don’t even have to go back a week for Liverpool losing at home to Burnley. The week before that Spurs were held at home by Fulham and in the closing stages could very easily have suffered the same fate United did here. Even Man City’s current rampant run was kicked off by a home draw with a West Brom side they’ve now spanked 5-0.

And ultimately that might be the toughest thing to take for Manchester United. Because the biggest winners tonight were not Sheffield United, who are still going down but just with a shade more dignity and a memorable night to cherish, but Manchester City.

They surely can’t believe their luck. Everton and Leicester drawing at Goodison is an ideal but entirely predictable result; this one is a huge gift. If Spurs get a result against Liverpool tomorrow you might as well just give City the title. Because if we’ve learned one thing this season, it’s that everything goes just the way you expect it to all the time.