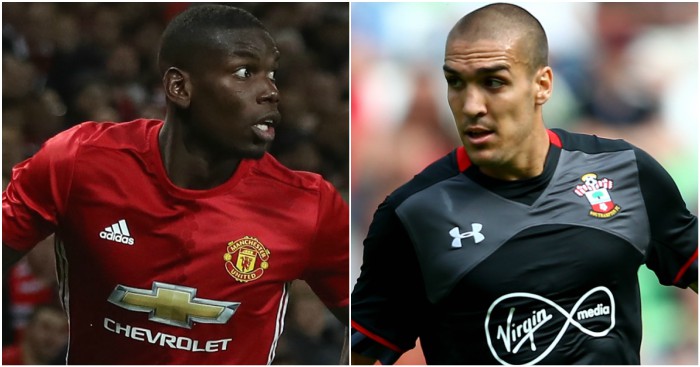 Oriol Romeu
The Spaniard has been Southampton’s most consistent performer this season and Claude Puel will need his midfield anchor to be at his industrious best at Wembley.

Romeu turned in a man-of-the-match performance in the semi-final second leg at Liverpool, as the Saints completed their journey to Wembley without conceding a goal. His display at Anfield was typical of the season the 25-year-old is enjoying. The former Barcelona and Chelsea workhorse has won Southampton’s Player of the Month award twice already this term having missed just one Premier League game, due to suspension. N’golo Kante might be stopping whatever attempts to pass him at Chelsea, but Romeu is doing a decent impression of the Frenchman in a very similar role. He has matched Kante for tackles and interceptions, and is out-performing the France star in duels, aerial battles and recoveries.

As a defensive screen, Romeu will need to impress again, most likely up against Paul Pogba. The United midfielder is set to play in a more advanced role in Henrikh Mkhitaryan’s absence, even closer to Zlatan Ibrahimovic. Romeu will be tasked with keeping the world’s most expensive player quiet and cutting off the supply line to United’s top scorer.

Wayne Rooney
The United captain issued a statement on Thursday to insist that he will not be leaving Old Trafford for China before the end of the season. Just because he’s not leaving, though, doesn’t mean he has a future.

“I think this should be the last question about him until the end of the season,” said Mourinho before revealing that Rooney is available for selection at Wembley. The attacker has missed United’s last three matches – all victories – due to a minor injury, amid speculation over a possible exit. But even with Mkhitaryan missing, Rooney is likely to find himself among the substitutes.

With reports earlier this week suggesting Rooney would use the cup final to gauge his prospects at United, it seems likely that, should he make it off the bench, the 31-year-old will need to do so something very special if he is to have much involvement “in helping the team in its fight for success on four fronts”. Given it has been over five months since he completed 90 minutes in the Premier League, ‘trophy lifting’ could be the most taxing responsibility trusted to him while Mourinho continues to phase out the skipper.

Manolo Gabbiadini
The Italy striker has enjoyed a flying start to life at St Mary’s after his £14.5million move from Napoli late last month. Three goals in only two games means he is already halfway to matching the club’s highest scorer.

It is not just Gabbiadini’s goals that have caught the eye. The forward’s manager and new team-mates have been impressed with his play outside the box, and with the Saints likely to spend most of Sunday afternoon without the ball, when it does reach the front, it needs to stick. That is one of the qualities Puel identified in the former Sampdoria striker, and the manager highlighted that trait following his debut against West Ham. “I think he lost just six balls of 33 that went to him and for a striker that is very good as there is always little space.”

A goal against the Hammers and two the following week also illustrated the quality of his finishing. On his debut, he lashed in his first Saints strike from a tight angle, while his turn before netting his second at Sunderland showed the 25-year-old can also conjure up something from very little, which is exactly what he may have to do if Saints are to win their first major trophy since 1976.

Paul Pogba
With Mkhitaryan missing, Pogba could get another chance to shine in a more advanced position – the role he wants to play long-term.

Mourinho tried a number of different systems and shapes to get the best out of his world record signing, and after Pogba revealed in October that he is “a player who would rather go forward,” Mourinho gave him that opportunity. A dull draw at Liverpool and a thrashing at Chelsea led the manager to scrap that plan and Pogba has since found form in a slightly deeper role alongside Ander Herrera, while Mkhitaryan has impressed further up the field with goals and assists.

But the Armenian’s absence provides Pogba with another chance. His understanding with Ibrahimovic is evident in the fact all five of Pogba’s assists have teed up the Swede but the pair have been linking up from more distant areas of the pitch. If the France star wants to prove his point, he needs to be quicker, cuter and closer to Ibra around the Wembley box.

Jack Stephens
The 23-year-old only made his Premier League debut last month but with Jose Fonte departing and Virgil van Dijk crocked, Stephens has been trusted by Puel to partner Maya Yoshida at the heart of the Saints defence.

After only four league starts, Stephens will line up at Wembley against Zlatan Ibrahimovic. If United fans think the Swede is in for a Sunday stroll, however, they cannot have watched the defender’s performance in the semi-final second-leg win at Liverpool, which Puel described as “calm and mature”.

The England Under-21 is hardly a rookie, having played over 70 times in League One during loan spells with Swindon and Coventry. But against United’s attacking riches, Stephens will need to turn in the performance of his fledgling career.