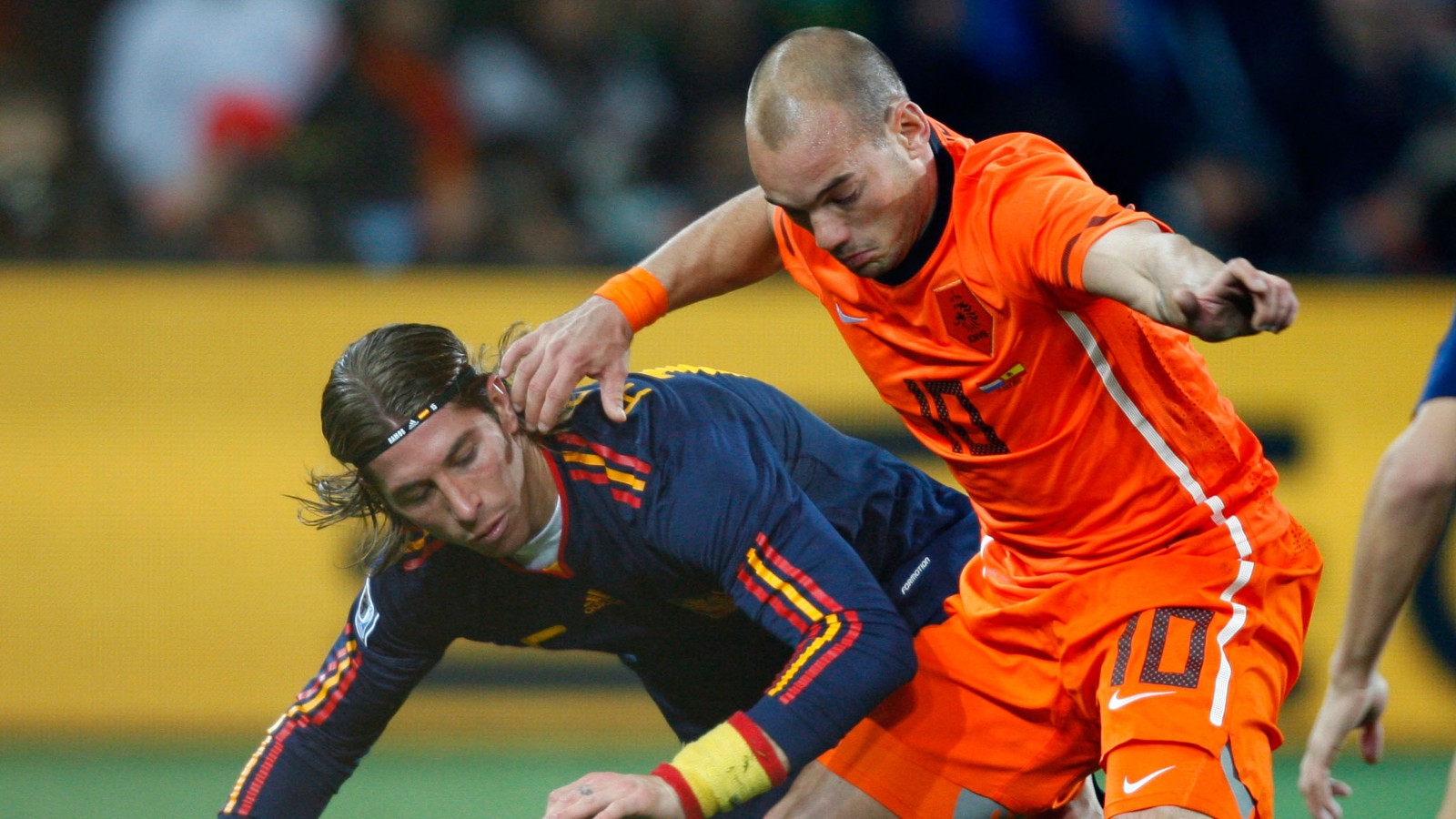 There is no room at all for Frenkie De Jong in this phenomenal team of Manchester United transfer legends who never actually joined the club.

Francesco Toldo
First mentioned as a Manchester United target during the search for Peter Schmeichel’s successor in 1999, Francesco Toldo was ruled out on the basis of cost. Massimo Taibi and Mark Bosnich were signed instead and that went so well that Toldo re-emerged on the radar within a year. The Italian keeper even insisted Fiorentina “are definitely trying to push me towards Manchester United, because they don’t want to sell me to another Italian team.” Toldo moved to Inter Milan 12 months later and had his final dalliance with Old Trafford in 2005, when he was considered as a cheap stop-gap replacement for Roy Carroll.

Ezequiel Garay
Long before signing Argentinean centre-halves became a vague habit and Marcos Rojo and Lisandro Martinez were but a twinkle in the Manchester United scouting department’s collective eye, Ezequiel Garay was being linked with a move to Old Trafford. “I believe the exit of Ferguson has influenced the deal,” he said in October 2013. “Moyes did not believe in me as much but that’s not a problem.” That well would be revisited under both Louis van Gaal and Jose Mourinho but neither pulled the trigger; Garay instead swapped Benfica for Zenit Saint Petersburg, then Valencia and injury-enforced retirement.

Mats Hummels
It was while watching a teenage Mario Gotze that Mats Hummels first came to the public attention of Manchester United in December 2011. A £15m bid was suggested for the supposed Nemanja Vidic replacement. The Serbian centre-half would actually stay until summer 2014, with Hummels later claiming he was “very close” to joining then. Hummels also “thought about going to Manchester United in 2015” and “there were talks, several times in the last few years” between the two parties, the latest such case coming in 2019 when he turned them down because of vibes and Champions League football.

Sergio Ramos
“We are at Man United, so we are always going to be linked with Ramos or Hummels or whoever it is. It’s not a problem,” was the elongated shrug of the shoulders issued by one Phil Jones in October 2015. That year saw the height of Sergio-Ramos-to-Manchester-United discourse as he openly engineered a new Real Madrid contract by manipulating their interest. The Spaniard was linked with the Premier League club before and since, first during his time with Sevilla in 2005, then in both the most recent summer transfer windows.

Ivan Perisic
Barely a week passed under Mourinho at Carrington that Ivan Perisic was not the subject of Old Trafford speculation. Manchester United were thought to have agreed personal terms with the winger in 2017 but could not get Inter Milan to budge on their asking price. By late 2018 that valuation had come down and speculation was reignited but never realised. Even as Perisic secured his long-awaited move to the Premier League with Tottenham in June, the Croatian would have appeared on the north west database again as Ralf Rangnick was a fan.

Kevin Strootman
Frenkie De Jong would be lucky to make the bench for this team. Manchester United have been in doomed long-term courtships with a wide range of midfielders: Cesc Fabregas, Toni Kroos and Steven Defour are unfortunate to miss out here. Kevin Strootman is the legacy pick, managing that remarkable feat of being a reported target for the club during the reigns of their last five permanent coaches before Erik ten Hag. In between PSV holding out for £25m over a possible Paul Scholes heir in October 2012 and the Marseille midfielder being offered to anyone who would listen in May 2019, Strootman joined Roma and acquired a proneness to injury which meant he appeared in far more Manchester United transfer stories than he did actual football games.

Arturo Vidal
Perhaps the first Manchester United rumour to be played out entirely over social media when the platforms were fully established, the pursuit of Arturo Vidal was a mess of ITKs, reported medicals and pre-season autographs on club shirts. The speculation zenith was in Louis van Gaal’s first summer, the Dutchman stoking those fires by describing Vidal as a player “I always wanted to buy”. The links have been looser but still present six years later, when it was Ole Gunnar Solskjaer’s turn to dilly dally over midfield reinforcements.

Sergej Milinkovic-Savic
“The Manchester United story is finished,” said Sergej Milinkovic-Savic in August 2019. Little did he know that there would be an addendum three years later when he emerged as an alternative target to the vastly different De Jong. There is a different timeline in which the Serbian midfielder is a season or two away from a testimonial and frankly that sounds like a more fun place to be.

Nico Gaitan
There was a time when the transfer window could not be officially declared open until Nico Gaitan was asked about Manchester United interest, awkwardly Photoshopped into the relevant kit and welcomed through the medium of a YouTube highlights package. Bids included one of £40m and a part-exchange with Fabio and Federico Macheda, while speculation truly ramped up in 2015 when every other story claimed the winger would be confirmed as a new Manchester United signing within anything from the next week to the next few hours.

Wesley Sneijder
The one to rule them all. No greater transfer rumour exists. It somehow simultaneously made just enough sense while seeming farfetched. Take the origin story as an example: Real Madrid player Sneijder was thrown into the ring for a potential part-exchange with Cristiano Ronaldo in 2008. Plausible but ludicrous. By 2011 the Dutchman was with Inter Milan but came “close” to joining “the biggest club in the world”. Ferguson tried to pretend last year that “we were never interested in Sneijder” but he is an honorary Manchester United icon by this point; the Daily Express even went as far as claiming ‘Erik ten Hag may be about to sign his own ‘Wesley Sneijder’ for Man Utd this summer’ in May.

Gabriel Batistuta
“If I ever leave Fiorentina I would very much like to go to Manchester United because out of the three best teams in Europe – United, Lazio and Barcelona – Manchester, in my opinion, is the best,” said Gabriel Batistuta in January 2000. Three years prior, Ferguson had attempted to arrange a deal but chairman Martin Edwards blocked the move for financial reasons. As early as December 1996, journalist Alan Nixon said that the Premier League champions were ‘being offered the Argentine World Cup player Gabriel Batistuta – for a little matter of £13m’.