Aaron Wan-Bissaka has been criticised on these pages and beyond, but his strides forward have been astonishing. 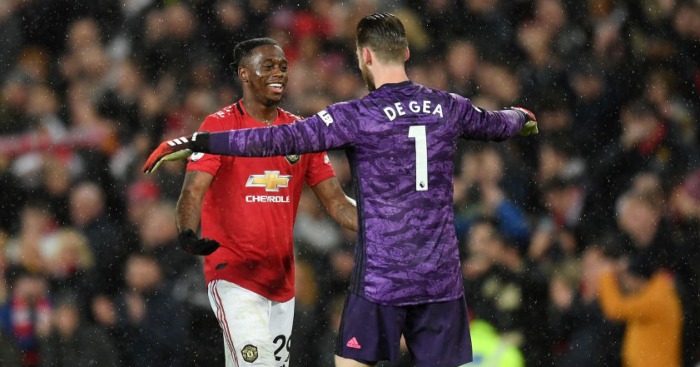 ‘Did Man Utd spend £50m on a ’90s full-back?’ is a question we asked back in November – but repeated several times in the final days of the 2010s – after Aaron Wan-Bissaka had created just one solitary chance in three matches against relegation candidates Norwich, Bournemouth and Brighton. For all his tackling prowess (21 in those three same games), there were legitimate questions to be raised about his suitability to the full-back role with an elite side. Was he at the wrong club or merely playing at the right club at the wrong time?

Four months later, it feels like Manchester United have spent £50m on an emphatically ’20s full-back who could dominate that flank for the whole of this nascent decade.

He was quite simply phenomenal against Manchester City in a formation that really would not have suited the 2019 version of Wan-Bissaka at Manchester United, when he appeared to be so focused on justifying his price tag with his ridiculous gadget legs that he struggled to produce anything that might conceivably be filed under ‘extra’. He seemed to be living by a ‘thou shalt not pass’ mantra that too often became ‘thou shalt not pass to a teammate in anything approaching an attacking position’. Quite understandably, the expensive, shy, uncapped 21-year-old from Crystal Palace initially concentrated on what he absolutely could do well. He tackled, he tackled some more, and then he lost the ball a little too often for a) comfort and b) Gareth Southgate.

Of course he defensively dominated the woefully out-of-form Raheem Sterling at Old Trafford, but that should surprise nobody who has watched Wan-Bissaka over the last two years; he has no equal in the Premier League in terms of one-on-one defending. His persistence is only matched by his agility. To watch him nibble, nibble and then finally take a massive bite of the ball is almost as beautiful as watching a winger cut inside and hit a 30-yard screamer. But against City – the culmination of an upturn in form for both player and club – he offered so much more, with dinks inside and outside, pushes of the ball with the outside of the foot and long, sweeping balls with the inside to release Daniel James. Being the best player on the pitch as a full-back is not the sole domain of Trent Alexander-Arnold.

It’s in comparison to the Liverpool right-back where Wan-Bissaka uncomfortably loses ground, but judging two very different players – even if they play in the same position – is infuriatingly reductive. Both are excellent and wonderfully, both are English. Leave Liverpool and Manchester United fans to exchange hilarious memes and handpicked statistics while the rest of us enjoy both and wonder how long Southgate can ignore Wan-Bissaka and continue to include Kieran Trippier. Oh how we wish at least one of them was a left-back.

Wan-Bissaka’s improvement this season has probably mirrored that of Manchester United like no other player. As they have gained confidence and become more dangerous, so too has the man from south London. “We didn’t start off great at first, not as the club is expected to do, so I think we’re moving in the right direction now,” he said last week, but he could have changed all of those plurals to the singular. He spoke in footballer language of a ‘process’ and that is exactly what we have seen from both club and player, who has added other, ‘extra’ elements to his game as United have grown into their campaign. After creating just nine chances in his first 19 Premier League games for United, Wan-Bissaka has created 11 in his last seven.

We should all learn lessons about judging a player just months into his first season at an elite club, but pretty much all of us are resistant to that kind of rational education. It’s increasingly impossible to resist a rush to judgement. But what we can do is hold our hands up and say that we have been forced to change our opinion by the kind of astonishing improvement that demands attention.