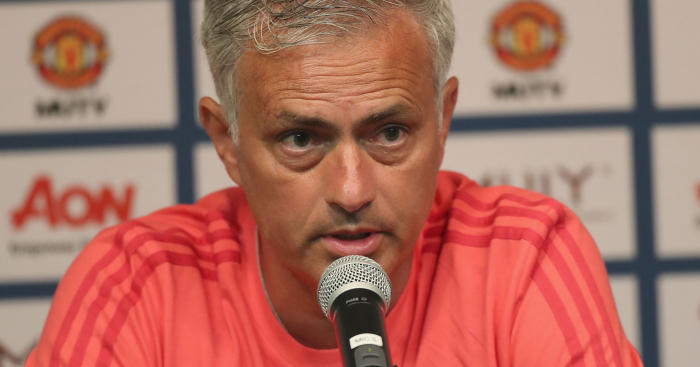 Manchester United are as long as 7/1 for the title in some places, their longest pre-season odds since 1991. If that seems a little mad, there are reasons why…

The gap that Manchester United need to leap is astonishing. If they had beaten City at home in December, turned the draw at Anfield in December into victory plus turned defeats against Tottenham (a), Chelsea (a) and Huddersfield (a) into wins they would still have lost the title by two points.

All is not necessarily rosy at the Etihad, with Pep Guardiola frustrated at the club’s inability to sign a new central midfielder after losing out on Fred and Jorginho and under pressure to go further in the Champions League this season. But City only dropped 14 points across the entire league season; Manchester United dropped nine in December alone. It will take a City slump as well as significant United improvement for that gap to be bridged.

Jose Mourinho’s mood
They are three words at the back of every Manchester United supporter’s mind: Third-season syndrome. Mourinho lasted three seasons at Stamford Bridge before being sacked in the September of the fourth. Mourinho signed a four-year deal after two seasons at Real Madrid before engineering a spat with the media over an accused lack of respect and promptly left after his third season. Mourinho was sacked by Chelsea in his third season having fallen out with senior players and club staff. This is what he does.

The one difference between Mourinho’s Manchester United tenure and those aforementioned three is that he has not yet won a league title in Manchester. That could be viewed as a reason for this all unravelling, but could also be sold as a positive. Mourinho doesn’t normally contemplate leaving any job until he has proved himself as a champion.

And so it is understandable to jump to the conclusion that an exit strategy is being engineered, one in which Mourinho will paint this spell not as a personal failure but failure on the part of Manchester United to give him the tools he needed to succeed. Quite how many supporters would buy that remains to be seen.

A lack of transfer activity
Yet for all the bluster and self-protection, Mourinho does have a point. There are few managers less shy at using the media to send transparent – and grumpy – messages to their club’s hierarchy, and Mourinho spent most of last season doing exactly that. He wanted a left-back, a back-up striker, a right winger, a new central defender and a central midfielder to replace Michael Carrick.

So far, Mourinho has got Diogo Dalot, a young talent but one signed on potential (and a player who you will repeatedly refer to as ‘Diego’ this season) and the central midfielder. Marouane Fellaini’s contract extension probably made that the lowest priority of all.

The biggest concern for Mourinho and Manchester United supporters is that there are not even many rumours. Gareth Bale will stay at Real Madrid, Thiago Alcantara would rather return to Barcelona if he leaves Bayern Munich and the suspicion is that Alex Sandro would prefer Paris Saint-Germain. Quite what role Mourinho’s tepid football of his first two seasons has played in these decisions, or whether this is Ed Woodward’s failure, is open to interpretation, but there is a more general sense that United is a club treading water rather than moving forward.

With 17 days of the transfer window remaining, the most likely arrival at Old Trafford would seem to be Harry Maguire for a fee of £65m. Is that really going to be enough to bridge the gap?

World Cup fatigue
Manchester United (12) were not the Premier League club with the most players at the World Cup – both Manchester City (16) and Chelsea (14) had more. Both of those clubs had seven representatives from the semi-final stage onwards, the same as United. But, like Chelsea with Eden Hazard and N’Golo Kante, Manchester United’s two most important outfield players endured long summers.

Paul Pogba and Romelu Lukaku will not play a part in Manchester United’s US tour, meaning that they will have to make do with short preseasons that could hamper their availability at the start of next season. Both have played an enormous amount of football over the last three years. Somewhere, weird fitness egg Raymond Verheijen is muttering something about red zones and soft tissue injuries.

And then there’s Liverpool, who could name an outrageous XI of players who didn’t even go to the World Cup: Karius, Clyne, Robertson, Van Dijk, Matip, Fabinho, Keita, Wijnaldum, Lallana, Origi, Sturridge. Your bench includes Gomez, Milner, Solanke, Moreno, Klavan and the kids.

Even some of those who did go will be fresh. Roberto Firmino, Xherdan Shaqiri, Mohamed Salah, Trent Alexander-Arnold and Sadio Mane started a combined ten matches in Russia between them, and none started a match after the last-16 stage. In a long campaign hopefully competing on four fronts, this stuff matters.

Liverpool mean business
Speaking of Liverpool, and it’s clear that FSG and Jurgen Klopp are eyeing a serious title challenge this season. It will come as no surprise to Manchester United supporters that City are odds-on favourites, but Liverpool are now significantly shorter odds than United.

That’s largely because of their summer transfer activity. Klopp admitted that he had been talking “bullshit” when criticising United and Mourinho for spending £89m on Pogba, but Klopp knows too that the normal expectations of transfer window spending have changed in a post-Neymar climate.

Klopp was also acutely aware that in order to move forward a club most make hay while the sun shines. Unexpectedly reaching the Champions League final allowed Liverpool to attract a higher calibre of player to the club, and they have maximised that to address a number of problems within the team.

There are plenty of ‘ifs’ for Liverpool, not least Mohamed Salah’s ability to repeat his heroics of 2017/18. But on paper, they have a squad at least as strong as Manchester United’s.