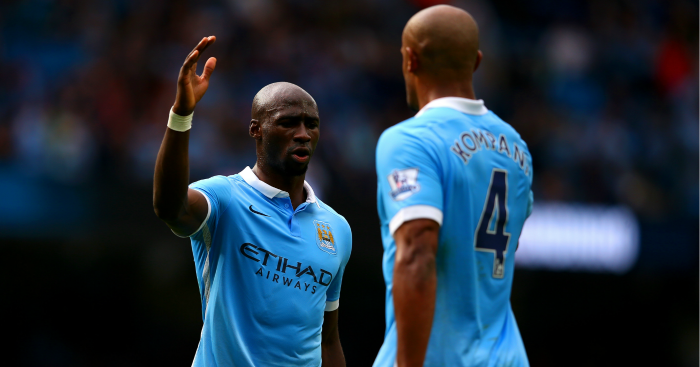 Bacary Sagna insists Eliaquim Mangala can help Manchester City get past PSG in the Champions League, after Vincent Kompany was ruled out of the second leg through injury.

It was suggested City captain Kompany could play at the Etihad after returning to training following yet another calf problem.

But manager Manuel Pellegrini ruled out the Belgian at the pre-match press conference, admitting: “He is not 100%. It is not possible.”

Error-prone France international Mangala is now likely to start in the heart of defence alongside Nicolas Otamendi, who has been passed fit after twisting his ankle in the 2-1 victory over West Brom.

“Vincent is our captain and a quality player but Mangala has been strong in recent games so, with or without [Kompany], we have a good team,” Sagna said.

“We need to remain as focused as in the last game. We are confident we can qualify but we need a good performance.

“PSG are a strong team, they have been [Ligue 1] champions for a few weeks. They have quality players and can be dangerous, but we must focus on our team.”

Sagna added: “To qualify would be amazing. I know Paris are going to come here to give us problems but I’m sure we can do it again.

“We had never reached the quarters before and we have a chance to reach the semis, which is important for the club.”

Raheem Sterling will also miss Tuesday night’s match, while midfielder Samir Nasri is ineligible after not being named in the club’s Champions League squad. Playmaker David Silva, however, is fit to return after being rested against the Baggies.

And City boss Pellegrini, who will be replaced by Pep Guardiola in the summer, also expressed his confidence in Mangala.

Pellegrini said: “I am absolutely confident because with this defence we played a lot of games here in the Premier League and in the Champions League and if we are in this stage it is because we have good defenders.

“We have had a lot of injuries (this season) but I trust 100 per cent in the players who can play.”

Pellegrini recognises both sides have everything to play for after an evenly-contested first encounter at the Parc des Princes which finished 2-2, in which both sides showed good some attacking play but also made costly errors.

The Chilean said: “When we started this stage against Paris Saint-Germain I said I didn’t think one team could be favourites. I continue thinking exactly the same.

“We have to play a tough game against a very good team. We knew that before we played in Paris and we went there to try to win from the beginning.

“Tomorrow we are going to do exactly the same thing because it is the way this team play.”

City, bidding to reach the semi-finals for the first time, are hoping to be roared on to victory by a capacity crowd.

Despite the importance of the game, ticket sales have been slow with many fans complaining about prices, which include a most expensive seat of £60.

But the result of the first leg has seen a late surge for tickets and 51,400 out of a competition-reduced capacity of 53,000 have been sold as of Monday afternoon. That already exceeds the club’s European home attendance record.

Pellegrini said: “Tomorrow we will have a full capacity here. The fans, for different reasons, they have not been involved 100 percent in this competition but as we continue further they will do it. They know tomorrow is a very important achievement for the club.”

The other issue concerning fans is their long-running dislike of European governing body UEFA, which manifests itself in their booing of the Champions League anthem.

Pellegrini was asked if that might set the wrong tone for such a big occasion for the team but he did not seem concerned.