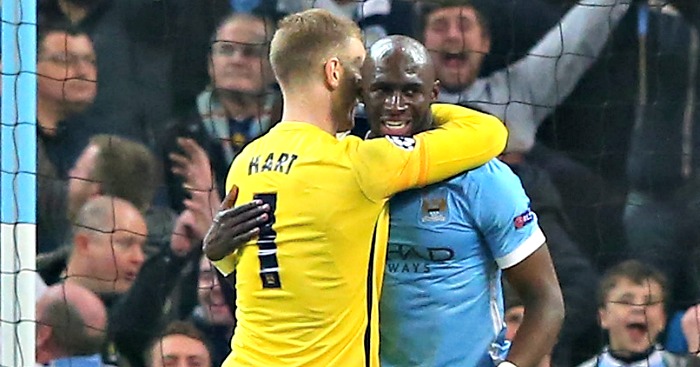 Mangala has endured a difficult first season after joining from Porto in the summer, with the central defender’s erratic performances attracting criticism from numerous outlets.

Former Blackburn and Chelsea striker Chris Sutton joined the many condemning Mangala for his showings on Monday, telling 5 Live’s Monday Night Club earlier this week: “You cannot give somebody a brain and that’s Mangala’s problem. His decision making is just appalling.

“Physically he’s up there, he can run, he’s strong but defending is all about decision making.”

The Frenchman was excellent at the Etihad Stadium on Wednesday, with City beating Paris Saint-Germain 1-0 in the second leg of their Champions League semi-final to secure a 3-2 win on aggregate. After the game he tweeted the following:

We did it! Amazing feeling! Already focused on the next game but thank you @chrissutton09 for the motivation tonight?#CMONCITY #Cleansheet

City manager Manuel Pellegrini was delighted with his side’s progress.

“For me it’s exactly the same, it doesn’t matter if we get Bayern or Barca or Real or whoever. I repeat I don’t want to link what happened tonight with the future.

“I think that is one of the targets of this club is to improve every year.

“We receive a lot of criticism for different reasons, but we are improving every year. The target of this club is to win the Champions League, but not just that.

“The project of this club is not finished, the club want to improve every year, this season, next season.”