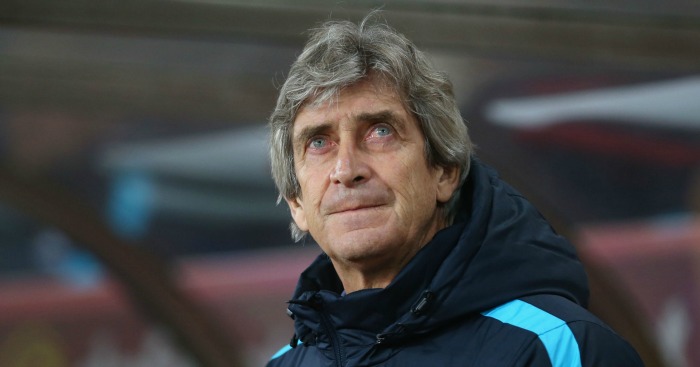 Even when Alan Pardew called Manuel Pellegrini a “f***ing old c***”, the choice of adjective was telling. Even in anger, the very worst that Pardew could muster was a reference to the Chilean’s age. Old? Born before you? Now that really hurts.

“We love him as our manager,” said a clearly moved Joe Hart this week after Manchester City fans had serenaded their leader throughout the win over Sunderland. No ex-City player has ever left the club and thrown angry epithets from afar, no current, embittered City player has briefed the press about a brewing ‘mutiny’ at the club, and no City supporter would ever laminate an A4 piece of paper calling for Pellegrini’s head, never mind hire a bloody plane. No self-respecting match-going City fan could type the little-used #pellegriniout hashtag without having flashbacks involving Lee Bradbury and immediately hitting delete.

Pellegrini is an old-fashioned manager for a predominantly old-fashioned support – brought in after the storm of Roberto Mancini to be a father figure to the players, a noble patrician to the fans and a neutral presence for the media. City, despite their largesse, did not want box office, they wanted calm, reserved, quiet, non-divisive, uncontroversial. While Chelsea were the brash, headline-hungry face of football’s new money, City have largely projected an air of quiet dignity, with Pellegrini the slightly dull public face. That Chelsea have had twice as many managers as City since the influx of Abu Dhabi money is telling; that the Chilean was allowed to announce his own exit is entirely in keeping with a ridiculously harmonious three-year relationship.

The manner in which Pellegrini delivered the news was quintessential Pellegrini. Manchester-based journalists have long complained about covering City press conferences (it’s just like working down a mine) and attempting to find a ‘line’ in a haystack of anodyne quotes about training hard, showing respect to the opposition and – unfortunately – how City would once again cope without Sergio Aguero. Pellegrini addressed Monday’s pre-match press conference with team news (Kompany, Mangala, Nasri, De Bruyne and Bony out, Delph rested), confirmed Kelechi Iheanacho would be added to City’s Champions League squad and then, by the way, he was leaving at the end of the season. Sorry, what?

“I could have extended my contract for one more year, but decided not to,” said Pellegrini. “There has been a lot of speculation, but they are not doing nothing behind me.”

Whatever had truly taken place behind the scenes, whatever the true extent of Pellegrini’s input into this decision, he has been allowed to create the impression/illusion that he is entirely complicit; he will leave through the front door, as is befitting for a man who has done the seemingly impossible: Spent three years as a manager in the Premier League without anybody thinking he is a dick. Dull, perhaps. Tactically naive, maybe. But a dick? You would be hard pressed to find anybody who harbours any level of loathing towards the man.

Can anybody else make the same claim? Jose Mourinho, Louis van Gaal, Alan Pardew, Sam Allardyce, Arsene Wenger, Brendan Rodgers, Mark Hughes. All have their supporters but equally their detractors; even Mauricio Pochettino suffers abusive chants from the mouths of Southampton fans. Arsene Wenger was perhaps universally respected after three years but longevity has not been his friend. Claudio Ranieri has escaped real ill-feeling from the public but his spell at Chelsea was marred by bullying from a media who gleefully painted him as a buffoon. Pellegrini? The worst anybody can muster is a shrug.

When Guardiola announced in December that he was leaving Bayern, Pellegrini was asked the inevitable question. His answer perfectly illustrates why he will leave England with pats on the back rather than kicks up the backside, regardless of his final trophy haul. Which could still, incidentally, be spectacular.

“I am sure Pep Guardiola will work here someday. I even hope he will have the opportunity to work at Manchester City too, because I love this club and I care about its future and I am sure he would do a good job.”